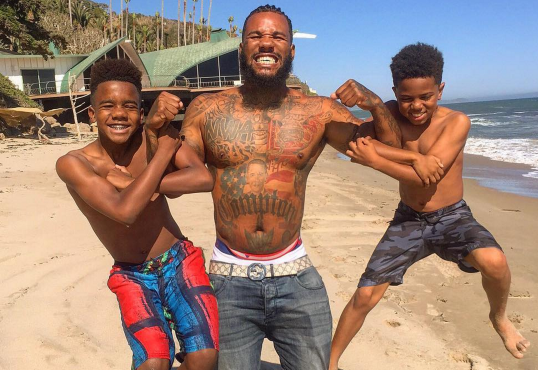 Los Angeles, CA – Most kids get a pizza party for their birthday or even new video game or bike if they’re more fortunate.

For Harlem Caron Taylor, growing up the son of a West Coast legend has had its perks — which started when he was featured as a tot within the insert of The Game’s classic debut, The Documentary back in 2005.

Fast forward to 2016 and Young Harlem is a 13-year-old is a basketball prodigy who keeps his pops grounded no matter how much trouble he gets himself into.

We’re talking Kanye and Kendrick. Steph and Klay. And so on and on. The only thing that will top this next year is a brand new Mercedes-Benz — which he still won’t be able to legally drive.

Maybe a new PS4 game will have to do.

Take a look at Harlem’s prestigious birthday shoutouts down below.

Another one….. A bday shout out to @hvrlemtaylor from his favorite player @stephencurry30 to round up his 4 day bday weekend makes me the best dad in the world !!!! The things my son told me made everything worth it & if do it 1,000,000 times over for him…… I love you son & I'm lucky to have a son like you #Harlems13thBday #LikeFatherLikeSon

From the champ @floydmayweather to @hvrlemtaylor for his bday ?????? #Harlems13thBday

@liltunechi shoutin the youngin out on his bday…… @hvrlemtaylor on right now !!! I love you son – Dad got homies everywhere #Harlems13thBday

From the bay to LA uncle @e40 lookin out for his nephew @hvrlemtaylor on his bday weekend ??? #Harlems13thBday

@demar_derozan stopped counting that 139 million to shout his young nephew @hvrlemtaylor out for his 4 bday weekend !!!!!! #Harlems13thBday

Ain't nothing but a #Compton thang y'all…. @problem354 on the shout out for his neph @hvrlemtaylor #BdayIsLife ??

Of course he knows who Asher Roth is ??????…….. Naw I'm fuckin wit ya @lildickygram back at it again with the humor for my young king @hvrlemtaylor's 4 day bday festivities !!!!!! #WeDoThisDaddyShit #Harlems13thBday #HappyHarmitzvahHarlemFromAsherOopsIMeanLilDicky