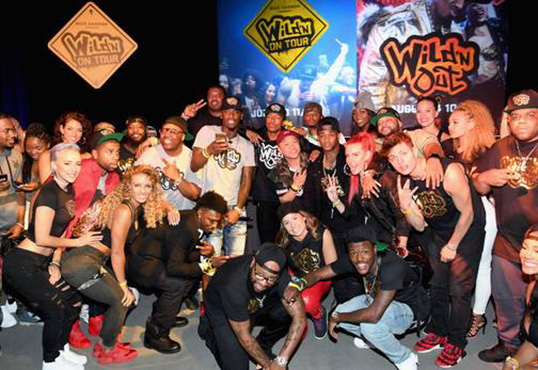 Daylyt Recaps The $100,000 Nick Cannon Battle That Didn't Go Down

Los Angeles, CA – Though there were less than five miles between them, the two battle rap events that went down in Los Angeles on June 25 were worlds apart.

One: King Of The Dot’s “Battles At The Bunker,” where a small crowd of die-hard fans watched some relatively unknown names put on in a sweltering warehouse set up specifically for battle rap. The second: the Wild ‘N Out live show at the BET Awards weekend, hosted by Nick Cannon at the Los Angeles Convention Center, where nationally televised stars performed an improv comedy version of battle rap.

The only rapper who attended both events was Daylyt, as a reporter for HipHopDX. Daylyt seemed like the perfect fit to cover the show since he’s able to expertly dimension hop between battle rap and mainstream Hip Hop. The Watts native has a tendency to pop in the strangest places, from a battle against Ab-Soul on the TDE rapper’s These Days… album, to a cameo in Hopsin’s viral “No Words” video, to a surprise appearance onstage with Lupe Fiasco in June 2015.

Daylyt navigated his way through the event, doing interviews with Nick Cannon and other cast members, and getting invited on stage during the show.

In a conversation after the show, Daylyt had a unique perspective on the more mainstream event.

“Everyone [at KOTD’s event] are the slaves of Hip Hop. They’re doing the hard work and making crumbs, while the half-as-good artists go perform on a big stage in front of millions of people. We’re saving Hip Hop here, for them to half-ass Hip Hop,” he said.

Leading up the Wild ‘N Out event, Cannon made an open challenge for a big-money battle, where he and an opponent would put up $100,000 each with the money going to the winner’s charity. Canadian battle rapper Charron accepted the challenge, but wanted the money to go to the winner, as selected by a panel of credible judges. The two traded bars, but ultimately Cannon declined the offer, saying they were looking for a bigger draw. Cannon continued to call out anyone and everyone for the event, including battle rap’s final boss, Eminem.

It seems like that bigger draw was never found, because instead of the touted $100,000 battle, Cannon instead joined into the end of a battle between popular battle rappers/castmembers Conceited and Hitman Holla. Daylyt says the battle itself was solid and that Cannon held his own after jumping in.

“I thought Hitman and Conceited would be a joking around kind of battle but it wasn’t. It was an actual, URL style battle … After Conceited and Hitman battled they double-teamed Nick Cannon, it turned into a 2-on-1, and Hitman went apeshit on Nick Cannon, but Nick Cannon actually came back very crazy.” Daylyt explained. “He had a few bars in there, where I was like ‘Nick Cannon could probably really do this’ … and I was amazed.”

With the popularity of Wild ‘N Out and the recent rap battles on The Late Late Show with James Corden, battle rap continues its push toward the mainstream, something that Daylyt considers a bad thing.

“The industry sees something that’s hot, and they jump on it. That’s what everybody is doing, they’re capitalizing off of battle rap being hot right now, and it’s going to hurt battle rap, badly,” Daylyt said, explaining that “if two celebrities battle, if two industry rappers battle, it’s over for all of [the battle rappers].”

Industry rapper vs. industry rapper isn’t something that’s been done successfully in the modern era of American battle rap, but Daylyt thinks it’s inevitable with the new wave of Hip Hop pushing out the more lyrical veteran rappers. It’s also an arena where those rappers would be able to compete to show they’re the best lyricists.

“Look at the Freshman Class, they’re pushing all the old school Hip Hop rappers like Royce or King Los into a corner, and that corner is called battle rap. It’s the only world where you can continue to be a lyricist and get credit for being an extreme lyricist. So a lot of the peers that I look up to such as [Lupe Fiasco], Royce, King Los, they all tell me ‘I’m itching.'”

As for whether any celebrities came to check out the Wild ‘N Out event, Daylyt said, “The celebrities saw battle rap and they stayed their asses on the other side of the wall, where the performances were.”