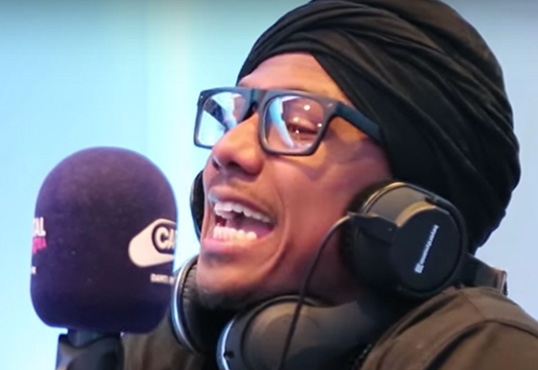 London, England – Nick Cannon is still looking for an opponent for his $100,000 battle rap challenge, and he’s willing to take on the most successful battle rapper of them all, Eminem.

The “Wild N’ Out” host restated his open challenge during a visit to Tim Westwood’s U.K. studio for an interview that dropped on YouTube yesterday (June 2).

“Last time I saw you, you were getting ready to battle Eminem,” the English DJ and radio presenter says, bringing up Cannon’s lyrical dustup with the Detroit rapper from 2009. “That would’ve been horrible,” he adds, clearly stating that he thought Cannon didn’t have a prayer in the match-up.

“I’m still ready! I’m trying to find him. Where is he?” Cannon responds. “We gonna be out in the States for the BET Awards. I’m holding a $100,000 battle — whoever wants it — but it has to be someone who can put up 100 grand … I done reached out to Tyga, he didn’t want it. I went to all Slaughterhouse. I did it like Mortal Kombat, I said I’ll take all of them out to get to the boss.”

Canadian battle rapper Corey Charron accepted Cannon’s open callout earlier this week with a blog and verse, and Cannon responded to him with a blog and some bars of his own, but ultimately said he was looking for opponents “that are a draw.”

Throughout the interview, Westwood goads Cannon along, saying, “Nick, you’re the best fam. I don’t think you’d win against Eminem, but you are the best in many other ways.”

Nick plays along with everything and says, “At least tell him to show up to the match. I can’t win by default.”

Westwood also implies that Eminem could have run out of lyrics, to which Cannon responds, “He’s one of the best to ever do it,” but agrees with Westwood that Eminem has mostly bowed out of the game and says he is “sitting on the mountain and looking down.”

Eminem didn’t seem to be at a loss for bars in his 2013 song “Rap God,” which made the Guinness Book Of World Records for having the most words in a hit single, with 1,560 in just over six minutes.

Cannon also mentioned that Conceited and Hitman Holla would be battling each other at the BET Awards weekend event, in what would be their third clash after their match-up at URL’s “Night Of Main Events 3” in 2013 and a quick face-off on “Wild N’ Out” in 2014.

Watch the high-energy interview below.