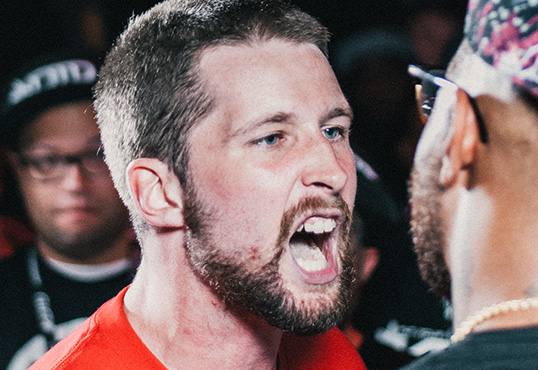 Ottawa, Canada – When Nick Cannon issued an open challenge for a $100,000 rap battle for the weekend festivities of the 2016 BET Awards, several high-profile rappers responded, including King Los, Shad “Bow Wow” Moss and Murda Mook. But the first person actually willing to put his money where his mouth is, is Canadian battle rapper Corey Charron.

The former King Of The Dot #1 contender accepted the offer in a video he posted to YouTube yesterday (May 30).

In the video, he accepts the challenge, drops a two-and-a-half minute verse going in on the “Wild ‘N Out” host (rapping, “I wanted to see lists of lyricists, not C-List celebrities”), and then shows a bank statement that proves he has the cash to back up the offer.

He also lists two conditions: the winner will be chosen by five credible judges that both battlers agree on beforehand (not by the crowd like Cannon had suggested), and if Charron wins, Cannon has to sign him to be a cast-member in the next season of the improv/comedy/battle rap show he hosts.

“I think he’s serious,” Charron told HipHopDX. “I actually like Nick Cannon and what he’s doing for battle rappers, but he put out a challenge and I’m hungry and have money.”

Charron said the money he’d put up is all his. “I own my own business and have battled for seven years. I have $250K to put up for Nick Cannon that I’m willing to lose/win and I don’t want a sponsor because I want all the profit.”

Charron is a well-known battle MC who has been a regular for many years on King Of The Dot and U.K. battle league Don’t Flop, and has also appeared on the URL stage against Shotgun Suge.

His freestyle ability has brought him success on BET before, helping him become the last Freestyle Friday champion on “106 & Park.” The prize for that win was supposed to be an appearance on the 2013 BET Hip Hop Awards cypher, but the network backtracked on the reward, explaining that the direction of the cypher had changed. That decision resulted in some national press for Charron, and he eventually released a verse going at the network on his own channel.

The following year, Charron was invited to participate in a cypher alongside Papoose, Remy Ma and Jarren Benton.

Many fans on Twitter already have Charron as the favorite in the battle with Cannon.

Charron would take @NickCannon money soooo quick. He's going my to pretend he never saw the video . Garunteed he takes some
Scrub

Im not the BIGGEST @charronkotd or seen all his battles, but hes 3-0d some of my favorites. @NickCannon show some love n take the battle

Props to @charronkotd replying to @NickCannon ‘s challenge. What absurd excuses is Drumline gonna come up with to dodge this bullet?

UPDATE: Cannon has addressed Charron’s video with a Facebook video.

To Charron and the rest of those who’ve challenged him, Cannon says, “I’ma be honest with y’all, this is a real event. BET Experience. June 25. We doing it big. ‘Wild ‘N Out’ presents the WildStyle battle. And I just need opponents that are a draw, no offense to anybody out there. I salute y’all, keep it going. I love battle rap culture — I’m doing this for Hip Hop. Some of y’all ain’t really ticket sellers in this venue, all your other forms y’all probably do but we doing this like we doing it for TV. You will get to see my guys Conceited, Hitman, Clips, Traphik, DC Young Fly, DoBoy, all of them and we might even have a few spots left open for a few battle rappers that we thinking about casting for ‘Wild ‘n Out.’ For all those guys out there talking reckless, I salute you, I salute the culture, keep it going. But you know, you barking at the moon and that ain’t really news. But the moon barks back, everybody talking about it.”

He then hits Charron with a verse. Check it out below.

The top comment on the video right now is from Charron, who wrote:

“It’s all love at the end of the day. I saw the challenge and I responded to it. I’ve stated earlier that I’m a fan of what Nick Cannon has done to better certain battle rappers lives. If you accept I’m down and if not then put me on the card and I’ll catch a body vs anyone. Salute and thanks for responding. You don’t want to stand in front of three rounds and deal with these rebuttals though!!!!”