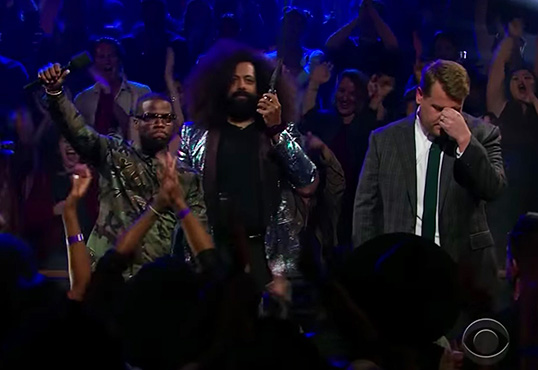 Los Angeles, CA – Comedian Kevin Hart has already stood across from Kendrick Lamar, T-Pain and Stormzy in (verrrry loosely defined) rap battles, so it makes sense that he knew what he was doing against Late Late Show host James Corden in the new installment of celebrity battle rap segment “Drop The Mic.”

The Central Intelligence star unleashed his Chocolate Droppa alter ego in the battle, going at Corden with “I fill football stadiums, you barely fit in the seat,” and mocking his role in Into The Woods by saying “Into The Woods is more like Into The Bargain Bin.”

Corden, meanwhile, dropped some barbs of his own, with a back-handed compliment about how Hart is great at being in movies with people more famous than him. The host focused on Hart’s height (somewhere around 5’3″) throughout the battle and at one point offers him a stepping stool.

Hart emerged the official winner, as judged by the crowd’s applause at the end of the battle.

Even though Hart has been a fan of Hip Hop since his early days, the lyrics for this battle came from Jensen Karp — AKA the former battle rapper Kanye West owes $300 to — and comedian Eliza Skinner, writer and host of LA improv/battle rap event series “Turnt Up.”

Watch the battle below: