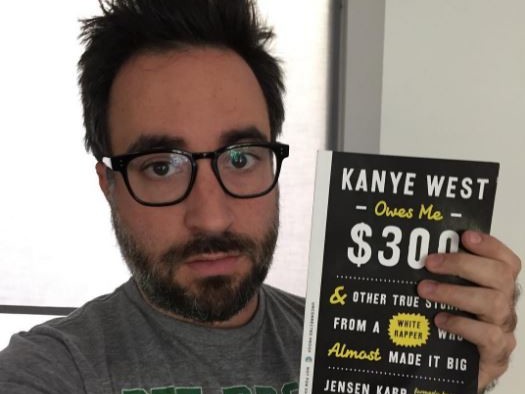 Former battle rapper Hot Karl, known for creating songs like “The Burbs” and “Sump’n Changes,” has released a new memoir titled “Kanye West Owes Me $300 & Other True Stories From A White Rapper Who Almost Made It Big.”

As expected, the memoir features stories on Kanye West, and during a newly-released interview with LA Weekly, Hot Karl (real name Jensen Karp) discussed his time spent with the Chicago rapper.

The Los Angeles lyricist went on to compare Kanye to the movie character Bowfinger, and questioned why anyone would think ‘Ye would be offended by the book’s title.

“He was basically Bowfinger,” Hot Karl said. “I obviously didn’t know he’d become what he became, otherwise I would’ve let him rap on my album like he wanted to…People are always like, ‘Is he going to be mad?’ And I don’t know why he would. The book is nice to him; Kanye knows people laughed when he left the room.”

Other rappers featured in Hot Karl’s memoir include Redman and Fabolous.

“Kanye West Owes Me $300” is currently available for purchase on Amazon.