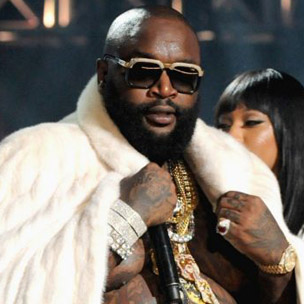 LMFAO dominated the radio with “Party Rock Anthem” when the song was released in 2011. Rick Ross noticed a striking similarity in the chorus to his 2006 song “Hustlin” and filed a lawsuit. In a recent ruling, the judge ordered that the case be thrown out.

According to TMZ, Rozay had three copyright applications pending for the Port of Miami cut, but none of them were completed. Therefore, any claim he had against LMFAO for infringement would be null and void.

Ross released his Black Market album in December. He is facing a $2 million lawsuit from 50 Cent over his use of of “In Da Club” for his Renzel Remixes mixtape, which was used to promote the LP.

(This article was first published January 3, 2014 and is as follows.)

With the start of the new year, Los Angeles-based duo LMFAO have found themselves at the center of a lawsuit filed by rapper Rick Ross and producer Jermaine “Mayne Zayne” Jackson of The Runners. According to HollywoodReporter.com, both Ross and Jackson are suing the pair for copyright infringement due to their 2010 single, “Party Rock Anthem.”

The lawsuit, which was filed in a Florida federal court, states that “Party Rock Anthem” directly uses Ross’ Port Of Miami single “Hustlin’” despite a “slight change” in the song’s lyrics.

“The use of ‘Hustlin’ ‘ in ‘Party Rock Anthem’ is readily apparent, despite the slight change from ‘Everyday I’m hustlin’ …’ to ‘Everyday I’m shufflin’ …’ and constitutes, inter alia, the creation of an unauthorized derivative work,” read the lawsuit.

“The phrase is so important to the success of ‘Party Rock Anthem,’ that LMFAO launched a highly successful clothing line, Party Rock Clothing, that features the phrase on T-shirts and other clothing items,” says the lawsuit.

HollywoodReporter.com reports that the defendants in the case have ignored warnings about the infringement and as a result Ross is hoping for an injunction and maximum statutory damages.

The lawsuit filed against LMFAO comes just days after “Freeway” Ricky Ross’ $10 million lawsuit against Rick Ross over the use of his stage name was shot down by a California judge due to the First Amendment.

Music videos for Rick Ross’ “Hustlin’” and LMFAO’s “Party Rock Anthem” can be found below.