A$AP Rocky and the whole A$AP Mob recently caught up with oddball media personality Nardwuar for an interview at SXSW. During the interview, Nardwuar broke out a few vinyl gems from some of the Harlem crew’s Hip Hop idols.

The A$AP Mob first reflected on two of Harlem’s most revered acts, the Diplomats and McGruff of Children of the Corn. Rocky explained that the Dips were his generation’s icons growing up and that Herb McGruff was a revered veteran of Uptown.

“This is too trill, ” he exclaimed. “When we discovered the Diplomats, they totally influenced our generation. It was crazy, everybody wanted to be Dipset at that time…[but] McGruff, you’re taking it to some digging’ in the crates shit…he used to run with Big L back in the days. He kind was out before Cam, Stan Spitz and all of them. He’s a big Harlem vet.”

Nardwuar then handed the Harlem upstart a copy of Das EFX’s ’98 LP Generation EFX and Black Moon’s War Zone. Rocky talked about how “Trilla” producer Beautiful Lou sampled “They Want EFX” in the song. He also added that Black Moon was one of his favorite groups from the ’90s era.

“As far as [Das EFX], you ever heard my song ‘Trilla,’ featuring [ASAP Twelvy and ASAP Nast], on the hook it’s like, ‘One-two, um/Buckle-my, um,’ that’s the sample from Das EFX on the song called ‘They Want EFX,’ he noted. “As far as Black Moon, I fuck with this shit, Buckshot and all them other niggas.” 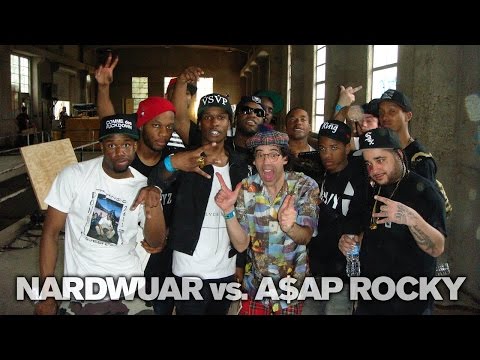