A brawl broke out between rapper A$AP Rocky and his crew against a drunken crowd at the SXSW music festival.

Spinner.com, reports that Rocky had about a dozen A$AP Mob members onstage at a Vice party. When one of the crew members had his do-rag swiped while stage-diving, the concert was stopped while the Mob demanded the do-rag back.

A crowd member responded by throwing a can of beer on stage, hitting one of the crew members. Rocky attempted to diffuse the situation. But after another beer can was thrown on stage, Rocky warned against throwing anything else, or there would be consequences.

After more items were thrown, Rocky and the A$AP Mob jumped into the crowd, fighting. Several audience members engaged them in a brawl.

This isn’t Rocky’s first incident, as the rapper and his crew allegedly vandalized a stage in Fader Fort and jumped a stage hand last year, sending him away in an ambulance. 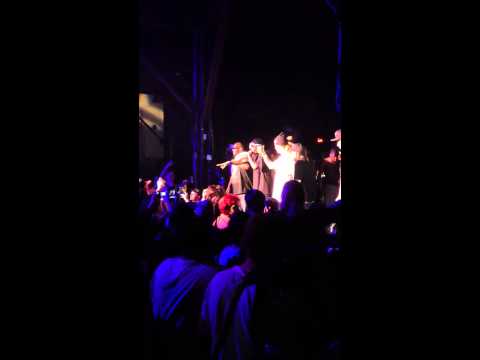