After conquering the charts with his critically acclaimed fifth LP My Beautiful Dark Twisted Fantasy, it looks like Kanye West’s next target in acting. The rapper, producer and recent film director is set to co-star in the upcoming Nike-produced Kobe Bryant film The Black Mamba.

Directed by Robert Rodriguez, the cult filmmaker behind Desparado and Sin City, the film finds West starring alongside Kobe Bryant, Bruce Willis and Danny Trejo. Although Nike has kept the details of the film’s story under wraps, a recently released trailer for the film finds West apparently playing the role of the antagonist.

This project isn’t the first time that Bryant and West’s paths have crossed, however. In addition to West frequenting a number of Lakers games, Kobe says that the two had the chance to work together a number of years ago. Although their collaboration didn’t manage to actualize, Bryant said that he jumped at the opportunity to work with him now.

“He and I had something in the works a couple of years ago, with Nike, it just never materialized,” said Bryant. “So the opportunity came up again.” (HipHopWired.com)

The Black Mamba is part of Nike’s promotion for Bryant’s latest line of sneakers the Nike Air Kobe Zoom VIs and is set to stream live through Nike’s Feacebook page this February 19 at 1 AM PST. Poster art and the trailer for the film can be seen below. 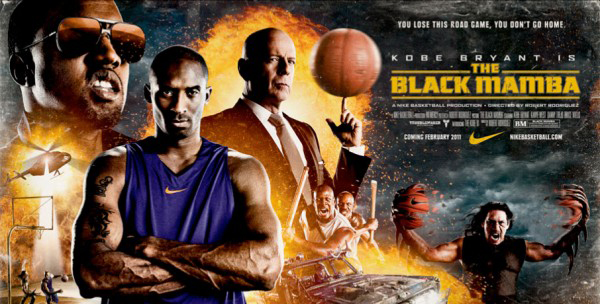