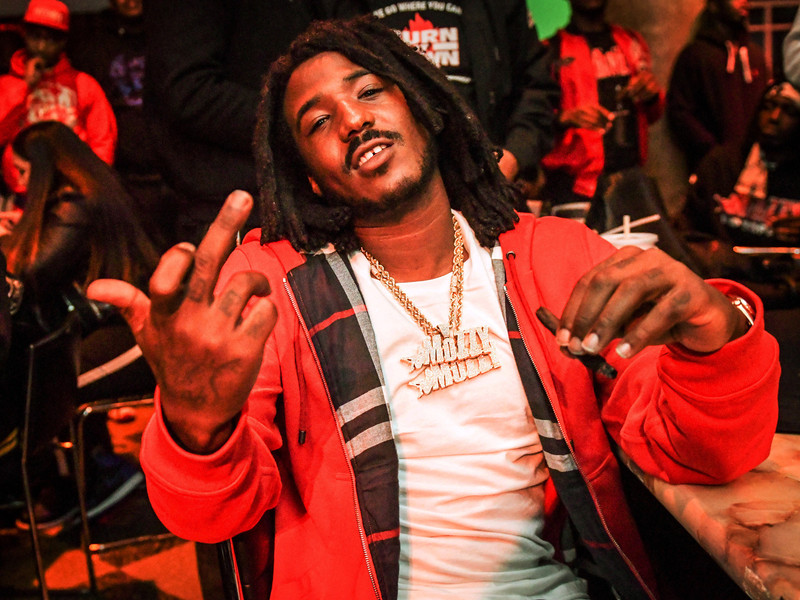 It’s been a banner year for Mozzy. His song “Sleep Walkin” was featured in Marvel’s Black Panther, he landed a placement on the film’s soundtrack and Kendrick Lamar shouted him out at the 2018 Grammys.

HipHopDX caught up with Mozzy around the album’s release for a deep dive into his career. In the first portion of our two-part interview, the prolific MC opens up about the self-described “beautiful struggle” that led him to where he is today.

HipHopDX: I wanted to start off by discussing your work ethic. Can you talk to me about your ability to put out so much content yet maintain a high quality in your music?

Mozzy: It’s my shit, it’s my lane. It’s my job, it’s what I do. I take it serious. The work ethic comes from my grandmother. It don’t matter what you want — in her household, you’re not gonna get anything until you work.

I don’t care if it’s a pair of shoes or a backpack of school supplies? Man, you gotta go cut them lines in the backyard, wash them cars, mop that kitchen floor. It’s work. She just work. She put you to work, never gave you nothing for free. I just take that same strategy into what I do. I just work. I don’t trip off the benefits of it. I don’t trip off the chicken. I’m just in love with the actual process. Just work, work, work, work.

And it’s quality because it’s something that I enjoy doing. It’s not like I’m just working and I’m just doing shit just ’cause I’m doing it for a bag. I actually enjoy what I’m doing. I’m all the way in sync with what I’m doing. I’m not gonna let nobody outwork me. There’s niggas probably doper than me, more talented than me. They probably got a label, they got a better deal, better position, their region’s probably more receptive to them. Whatever the case, what they not gonna do is outwork me.

DX: You mentioned your grandma. You bring her up on “Keep Me Hustlin” on this new album and she’s a frequent reference in your music. What was it like growing up with her and what did she impart on you?

Prior to me finding myself, I was rapping about kid shit. I would just rap whatever. I was just rapping, and she wouldn’t let me cuss. It was a very strict household. I lived with somebody you didn’t want to live with as a child. As a child, this isn’t the person you want to live with. You’d rather be with your auntie, your mom, your dad.

Pops was in prison. Moms was elsewhere. So, grams had guardianship of me. We got a close-knit family. So usually, I used to be at my auntie’s house. They more urban. Nah, I should say more tapped in to the gangsta community-type.

Just to get you a perception of grams, [she’s] old fashioned and wasn’t into all the materialistic things. I grew up and you had to go get it yourself.

DX: Can you describe what your early rap days were like? What bumps in the road did you face before you got some recognition?

Mozzy: I was an embarrassment to the family ’cause I’m finding my gangsta and dealing with peer pressure and what the streets have to offer. I was still rapping though. I’m in and outta jail, still rapping. I was still pursuing my dreams. I thought it was gonna pop for me.

By the time I hit 17 or 18, I realized I’d never be a Lil Bow Wow or Lil Romeo. So, all that being on the nationwide scale, that shit was no longer in play. It was time to tap into reality. Fuck it, I just wanna be like Messy Marv. I wanna be as big as Jacka. That’s when you start tapping into reality because it wasn’t looking right for me. I was an embarrassment to the family. I’m sleeping on gram’s couch. I gotta go back to my grandmother’s house, and she got a dude in there now. I used to be the dude of the house, she gotta dude in there now.

I made it shake though. I stuck with it. I kept that aggressive bite down. Shout out to my team and everybody who marched with me. It’s been a beautiful struggle.

DX: Regarding that breakthrough point, would you sa Bladadah was the album that first took off for you?

I went to jail, got outta jail, did Bladadah. That’s when the world started tapping in. That’s when it lit up for me. That’s when you could jump on a flight and go to Kansas City and they know your shit word for word. You can go to Philadelphia and them niggas is tapped in and familiar. You can go to SOB’s in New York and shit go up.

DX: On this new album, you rap on a Luniz “I Got Five On It” sample and you’ve got a collaboration with Too $hort. One thing that stands out to me is your connection to history and your respect for the elders. Can you talk to me about the importance of maintaining such respect in Hip Hop?

Mozzy: Gotta be humble. My grandmother, she’s the elder. She raised me. I don’t got nothing but respect for elders. If I’m in the mall and somebody tell me to pull up my pants, if it’s an elderly woman or elderly man and I feel like he didn’t say it in a disrespectful tone, I’ma be very respectful. I’ma pull up my pants just ’cause I respect my elders. I’m not gonna cuss around certain people off the grill. I feel like it’s restricted in this area.

And I don’t just respect my elders, I respect those that I’m an influence of and that influenced me. I say that to say that people in the game – the big dogs, the old heads – a nigga might have more Instagram likes or more Instagram followers than them or a song might be doing way more numbers, but I don’t go off of that. That ain’t on. That ain’t how I size somebody up. I don’t go off of that.

I go off of how I feel about a person, the energy, the traction. It’s an automatic. I think I got it from gams, though. The respect I got for her and the family, I take that and apply it in the world that we live in. I respect my elders. I respect those that might not be above me if I was once influenced by them. I don’t go off the status and standards.

Mozzy: That’s my dog. It comes naturally. It’s the same person I was rocking with when I was on Garage Band inside the house. We’d just go buy an Apple Mac, pull up Garage Band, steal somebody’s beat and start recording in the closet. No microphone, just use the microphone that’s built in on the laptop and go yay yay. This my dog. This the one I stood in front of the stores and pushed CD’s with. It’s the one where we debate: we really ‘gon do this shit or fuck this shit, let’s do something else? It’s my dog, it’s the one.

He watched grams say, “Hey, y’all need to cut that rapping shit, cut all that shit out.” We ain’t doing that. He was right there, he witnessed the struggle. He was struggling with me. I wouldn’t want to make no music with nobody else. Shout out to all the celebrities, but this is my foundation. We in this shit together and I ain’t talking about two, three years. I’m talking about a lifetime. That’s my dog for real, so that’s natural.

Check back soon for Part 2 of HipHopDX’s interview with Mozzy where he discusses Kendrick Lamar’s co-sign, being part of Black Panther and his creative process.