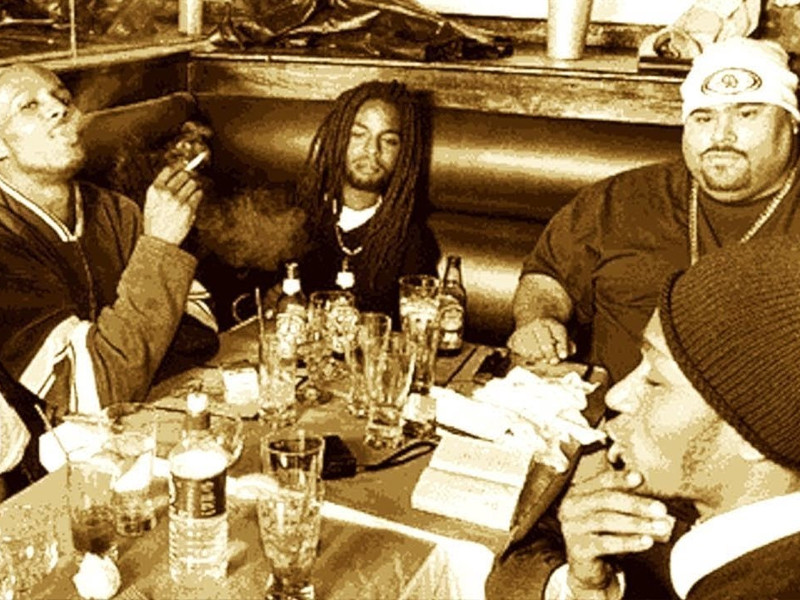 Hip Hop has changed significantly in the past two decades. Today’s fan has unprecedented access to artists, their music, and videos chronicling their every move. In stark contrast, being a hardcore fan of Hip Hop in the ’90s required a balanced level of dedication and budgeting. Print media reigned supreme, and without a video-streaming platform like YouTube available, fans relied on platforms like MTV for content.

It was during this era — which lacked accessible video camera technology and social media — that many amazing moments were lost, like DMX and JAY-Z’s infamous battle, or KRS-One throwing P.M. Dawn off a stage. Luckily, thanks to unsung hero Kurt Nice (creator of the influential Shade Of Hip Hop video series), one of the most iconic cyphers in modern Hip Hop history has lived on to capture the imagination of new listeners.

On December 18, 1997, journalist (and now notable television personality) Touré was set to sit down in a roundtable conversation with Fugees affiliate John Forté, DMX, Mos Def, Big Pun, Canibus, and Mic Geronimo for the Village Voice. Luckily for Nice, his relationship with Forté ended up affording him access to an incredible moment in Hip Hop history.

“John Forté had seen the first two volumes of Shades Of Hip Hop,” Nice explains to HipHopDX. “He was like ‘I want to be on the next one, I want you to record me.'”

Nice did a lot of work in cable television but often was privy to fantastic footage of artists in their element. Most of this footage could never conceivably make it to TV, so he officially began dropping his video mixtapes in 1997.

In 1992, I was working on a local cable show(NJ) called En-Toon. This clip is one of the many we couldn't use on the air due to censorship. It was one of the reasons I started doing Shades of Hip Hop so these gems wouldn't be hidden forever… #HipHop #BlackMoon #DuckDown pic.twitter.com/XkD97ggcHU

“My tapes were in all the major spots [in New York City],” he says. “There was no internet like that where you could stream video. The only, the only person that had that same type of footage that I had was probably Ralph McDaniels from Video Music Box.”

Forté, in his desire to work with Nice, had mentioned that he was invited to be part of the roundtable, which was, in essence, a freshman class of artists about to blow up. “I got on the phone with Touré and asked if I could bring the camera down. He was like, ‘Sure, there’s not going to be anyone else there recording.’ So we met up at this spot in New York, The Match Cafe, and the footage that you see is what I captured for like an hour straight.”

Though the session has since become a thing of legend, with Pun dropping “Dream Shatterer” in its entirety and Canibus unleashing “2nd Round KO” for the first time, its influence wasn’t immediately felt. “Back then [people] were kind of like, ‘Who cares?’ I mean they did just come out … at the time a lot of people just shrugged it off a little bit.”

Beyond the bars, it was the first time anything like this had been captured and widely spread on tape. The combination of an interview — especially Canibus candidly airing out his grievances with LL Cool J — and on-location performance is a format that went on to influence the DVD era that ran rampant throughout the early turn of the century.

“It was the first time [Canibus] ever put it in public. A matter of fact, like three or four times in between takes, he asked me not to put it out until he dropped the song,” he says. “But it was weird because he was saying it as if he were trying to use reverse psychology on me to ask to put it out ahead of time.”

According to Nice, after the third volume of Shade Of Hip Hop dropped (containing the cypher), LL Cool J extended an offer to Nice to join him on tour. “He just really wanted me to get his side of everything,” he says. Having seen rap beef get very real, he didn’t want to entertain a back and forth, though.

Nice continued Shades Of Hip Hop until roughly 2000, at which point he decided to fall back as the rise of DVD “mixtapes” began to flood the market. He continues to write, and — on top of music marketing and educating youth on Hip Hop — has stayed creative. One of his central initiatives currently is creating a Hip Hop archive of his content, and advocating for the necessity of a more formal archive.

His YouTube channel has hours of amazing content, but he admits to having LOTS more digitizing ahead of him. “I’ve lost footage,” he says in a disappointed tone. “I said to myself, let me get this all somewhere safe so that never happens again.”

As his conversation with HipHopDX came to a close, Nice jokingly toyed with the idea of re-releasing the iconic cypher footage with a director’s cut. “I’ve seen people theorize that Pun had beef with Mos Def because he didn’t shake Pun’s hand after his verse,” he points out. As he explains, there had been a disagreement that had taken place, when the other MCs didn’t share some of his ideologies, and Mos still seemed to feel some way about it.

He also shared that the group had posted up at multiple restaurants before settling in at Match Cafe. “It was 1 p.m. on a Tuesday afternoon, like midtown Manhattan,” he says with a laugh. “It was like a business lunch crowd in there.” The artists — obviously loud and boisterous — were mostly broke, as were their crews, so nobody was purchasing anything.

When they did finally settle in, the cafe’s owner didn’t want to turn on the lights, which would have resulted in dark, unusable footage. “I had to pay the owner $60 to turn the lights on,” he admits.