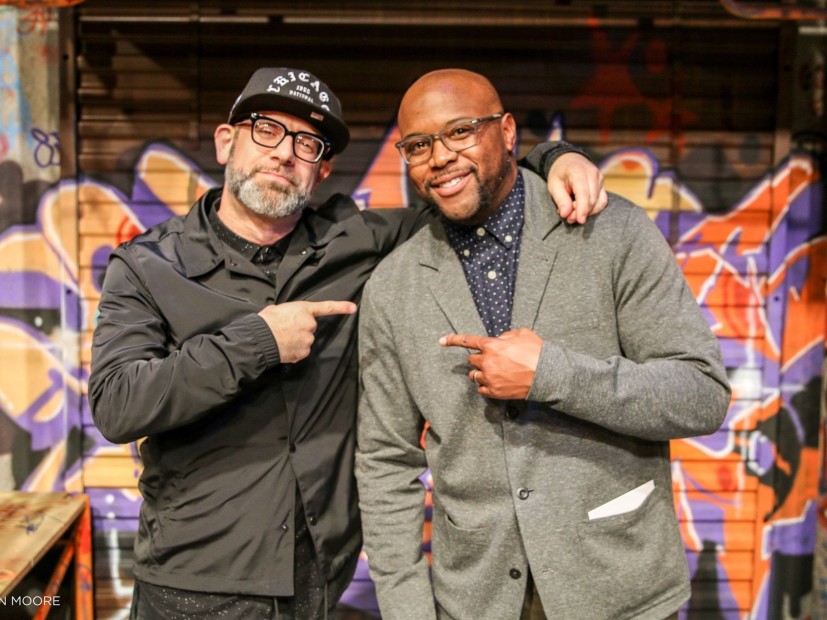 Playwrights Idris Goodwin and Kevin Coval wanted to write a play that didn’t necessarily explore the age-old question of graffiti being art or vandalism but give audiences a closer look at what exactly goes on behind the scenes of the colorful subculture.

The result was This Is Modern Art, an 80-minute glimpse into the underground world of an art form both shunned and celebrated by the masses.

“Kevin [Coval] and I made a very conscious choice that we were not going to write a play about people arguing about graffiti versus vandalism but rather bring audiences into a tight knit group of writers and educate them,” Goodwin tells HipHopDX. “I’ve been a diehard Hip Hop culture fanatic my whole life and there was a lot I didn’t know.

“I feel like some folks think because they saw Exit Through The Gift Shop [documentary about Banksy and Mr. Brainwash] and some cool murals in Paris, they know.”

Prolific graf legend KEO of the X-Men, who came up in the graffiti mecca of New York City, provided the artwork for the play and recently found himself in a defensive position after the New York Times wrote a less than favorable review on it.

“I went fully expecting it to be embarrassingly cringeworthy like most productions/screenplays/scripts dealing with graffiti writing,” he wrote on Instagram. “I don’t know what the NYT theatre critic standards are, but I was relieved to see that @kevincoval and @idrisgoodwin cared enough to get it right.

“It’s based on actual events in Chicago graffiti writing (NOT street art) history, and they even acknowledge @parkerlee293 @trixterone and @elijapool amongst other Chi Rock pioneers who really smashed CTA.”

So, my work for this play “This Is Modern Art” is in the New York Times today, although the critic didn’t seem to think much of the show, I saw it the other night and was thoroughly entertained. But then, I went fully expecting it to be embarrassingly cringeworthy like most productions/ screenplays/ scripts dealing with graffiti writing. I don’t know what the NYT theatre critic standards are, but I was relieved to see that @kevincoval and @idrisgoodwin cared enough to get it right. It’s based on actual events in Chicago graffiti writing (NOT street art) history, and they even acknowledge @parkerlee293 @trixterone and @elijapool amongst other Chi Rock pioneers who really smashed CTA. #XMEN #TCP #CHIROCKNATION #BIGHECKLEFRESHFOREVER That this herb from the NYT #AlexisSoloski @soloskialexis even mentions the popular acceptance of Banksy and Swoon as evidence of why these types of discussions are no longer necessary proves to me EXACTLY why we still need to distinguish what we do… we WRITE. We are WRITERS. It’s as if I told you we no longer need to discuss the work of The Last Poets or The Treacherous 3 because mainstream radio has fully embraced Drake, Macklemore, and Pitbull. Or that it’s okay to buff @leequinones incredible handball courts because we restored and protected Keith Haring’s “Crack is Wack” piece. Fuck outta here… in fact, @soloskialexis shouldn’t discuss theatre at all, because hey, a lotta people already liked CATS, right? And who needs to acknowledge the New York Times or any other Journalists even exist when we already readily accept and celebrate TMZ and #worldstarfights right? Anywho, it’s just entertainment right? I recommend checking it out for yourself, these kids definitely do their thing on stage @_blessedunrest_

KEO explained to DX why he felt inclined to show his support for Goodwin and Coval’s play, which he thinks is deserving of a wider audience.

“Before I ever saw the New York Times review, I had made up my mind to utilize my social media platform to give them a little light after I saw the play,” he says. “I thought it was worthwhile, not because I got a paycheck from doing the artwork. If it had sucked, I wouldn’t have promoted it. I would have been embarrassed to have my name attached to it. That same morning, this review came out. People are entitled to their opinion.”

“The problem I had with this was larger than just this one play and the review,” he continued. “For years now, they’ve been attempting to obliterate what we do by replacing it with something they call street art, which no one can define for me. What is it street art? Is it just something created in the streets? If so, how does it end up in a gallery? It’s not based on technique or philosophy. A guy who stencils a black and white rat is a street artist? And this other guy that uses tubes of oil paint and this guy who writes his name with a funny symbol is street art? Then everything is street art. It doesn’t mean anything.”

@timothy.curtis designed this shirt from the penitentiary, @handselecta printed it up, I wore it and @mkuborn took the photo… oh and @steveespopowers added my blue halo ? #ittakesavillage #teamworkmakesthedreamwork

Over the past few decades, graffiti art has bubbled up from beneath the surface. Now, soccer moms use it as a background for their kids’ “edgy” senior portraits and Taco Bell throws it into its commercials to advertise the latest chalupa.

But KEO has been writing graffiti for decades and witnessed its birth firsthand while growing up in Brooklyn. He says “anything can be fine art” these days.

“They just want to take whatever’s corporate approved, like, ‘Look we love this guy this week’ like Mr. Brainwash or something,” he says. “When I was a kid, it was Keith Haring. They were great artists but they were not graffiti artists. We did group shows at the Fun Gallery with all the great writers like Zephyr and they’d add some of these downtown new wave kinds of artists. Their work is totally different. Their motivation is totally different. They’re not even coming from the same place. Invariably, the critics, collectors, gallerists, curators, academics — those who decided what goes down in history as representing an era would choose one of them.

“It’s like,’Hey we played an Elvis record on our radio station so we don’t need Little Richard. We gave you rock-and-roll.’ While they’re free to pick who they like, don’t tell me this somehow represents all graffiti writers. What we did was communication. It was writing. There’s power in writing. Anything can be fine art. I can piss in my hat and put in the Museum of Modern Art. If I piss in my hat and I tell you it’s a boat, are you going to try to sail it across the ocean? It’s an old world craft passed down from master to apprentice. We put in blood, sweat and tears. We went to jail for this. It’s not the same thing.”

While Goodwin admits it’s his “least consistently positive reviewed play,” he expected it to illicit confusion from people who have never truly understood the culture, and some criticism from those who do. [apple_news_ad type=”any”]

“We knew how we chose to craft This Is Modern Art would split the reactions,” Goodwin says. “But as a professional dramatist, I get irked that there’s this prevailing expectation of what a play is and can be and furthermore, that giving 80 minutes of the floor to a complicated and heavily criminalized, misunderstood culture that’s made millions for those outside of it is some kind of negative or weakens it as art.

“But again, it is what it is and is to be expected. If anything, the hate has been balanced by a lot of love. Ultimately, it’s the response of the KEOs of the world that matter the most to us. I mean, dude did the art for one of the most influential albums of my life, [MF Doom’s] Operation Doomsday, so New York Times or whoever can say what they want.”

Find more information on This Is Modern Art here.