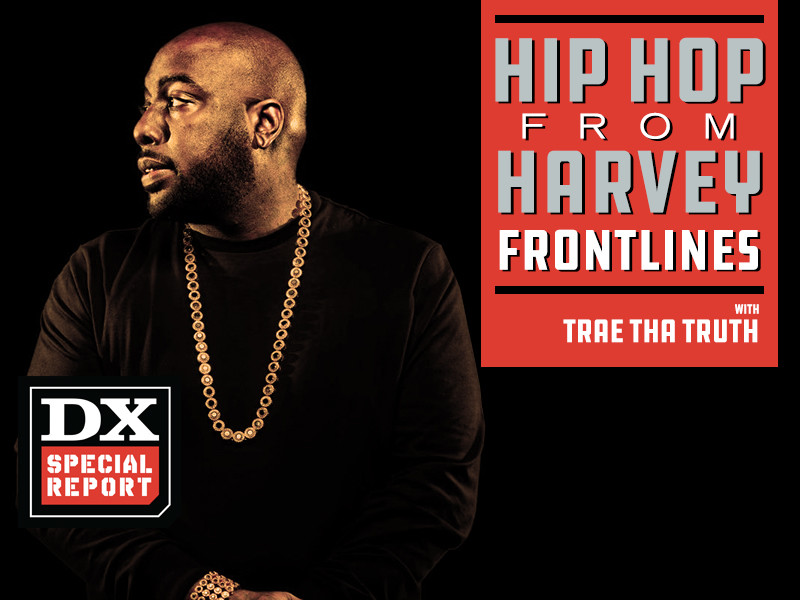 Timing waits for no man, regardless of the circumstances.

Up until a couple weeks ago, Trae Tha Truth was comfortably enjoying yet another breakout year — a resurgence of an already storied career if you will. With Grand Hustle, McDonald’s and his own ABN imprint in his corner, he was proving that outer space was the limit.

But when the deadly Hurricane Harvey hit, he — like countless Houston residents — was forced to sacrifice luxury in exchange for love.

This is his story that’s still being written.

You were in the trenches from the start. Where was your headspace at? How were you feeling at the time?

Man, tired. It’s all love, though. The way I stand in the city breeds responsibilities. So I gotta stand like no other.

What were some of the more strenuous activities you took part in?

I did boat and monster truck rescues. We actually started going door-to-door giving people supplies and accessories. I did that through Port Arthur and Beaumont, as well as Houston. We hit three to four neighborhoods a day while giving them food and supplies. I partnered with some people and we brought in 25 pairs of shoes. Just working, man. And I started a GoFundMe in order to raise $250,000K. I’m tired but still going.

There are a whole bunch of charities out there. Should everyone else take that approach?

I don’t know. The thing on my end is like this: if people want to help and donate, then I would always support. You see while people sent all this money to other organizations, nobody going out in the neighborhoods to do anything. [They’re] not seeing what people need, checking the necessities. Not even being a support factor.

All that money that was made to Red Cross, it goes to Red Cross as a whole. You can say, ‘Hey, this is for Houston.’ They’re not going to do that.

Where were you at when Hurricane Harvey first hit?

I was at home. The hurricane came and a lot of us made it through the first night. A lot of us thought it was ok, but that was only to our surprise. The rain changed all that. The rain changed everything. When that following Monday hit, it was a wrap.

They’re saying the rebuilding process will be something else. As far as you can see, is there a timetable for it?

Hell nah! It’s gonna be years. It’s gonna be this time next year before we’re even 20 percent decent. Some apartment complexes and homes you can’t even go back to. It’s all bad, man.

Looking across the board, I know the Houston Hip Hop community is all being active. Do you think this can bring everybody together like it was ’06?

I ain’t even going to lie to ya, bro. I ain’t even thinking about music. I haven’t even thought of it. Not to be rude, that shit ain’t even on my mind. I’m about action right now. There definitely could be a lot more action, but at the end of the day, we do what we can.

Every day, there’s people in need. It’s a constant circle. There’s no way around it.