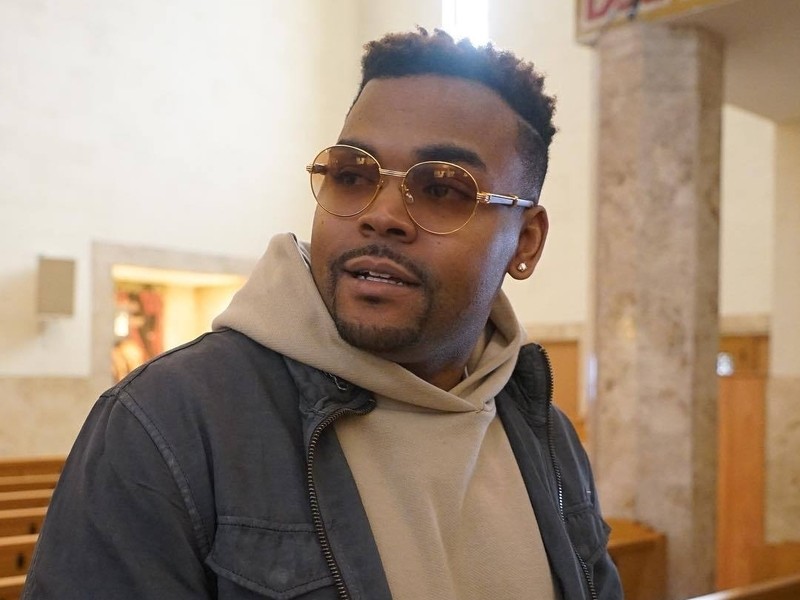 Over the years, Slum Village has gone through the type of lineup changes that rarely occur in Hip Hop. Death and dysfunction turned the influential Detroit group into a revolving door with T3 being the only constant.

With J Dilla, Baatin and Elzhi no longer around, Slum needed a stabilizing force in recent years and found it in Young RJ. The producer already played a major role behind the scenes, learning under Dilla and eventually producing for the group. So RJ, along with Dilla’s younger brother Illa J, made for a natural fit to step in and carry on the Slum legacy when needed.

But once again, a new chapter is being opened in the story of Slum. After releasing two LPs, the members of this latest iteration have embarked on solo careers. Suddenly, 2015’s Yes! album seems more and more like their swan song. RJ is now focused on his debut album, Blaq Royalty, which is due out on October 10.

HipHopDX had the opportunity to speak with RJ about his new endeavors and learn about the current status of Slum. In addition to the interview, the rapper/producer has teamed up with DX to launch a contest that should excite any fan of Dilla and Slum.

Readers can win a Dilla poster, hat and T-shirt as well as a Slum box set and T-shirt. Check out our conversation with RJ and learn how to enter the contest below.

HipHopDX: You’ve got your new album coming out soon. I know T3 is also working on his solo work, so I just wanted to get a status update on the state of Slum Village.

Young RJ: Well, the status of Slum Village — the goal was to continue the legacy that Baatin and Dilla asked us to do, which was to keep Slum going and keep the brand intact. After the turmoil that went on over Slum’s career with the passing of members and group changes, we accomplished the task of building the brand up to where it should be. And we wanted to leave it at that mark. We felt like Yes was a great way to kind of just leave it there.

DX: So would you say that’s going to be the final Slum Village album?

RJ: We don’t know. You don’t ever want to say that’s what’s going to happen or it’s not gonna happen because now we feel like that’s a good place to leave it. I don’t wanna say what the future holds because then you gotta come back and eat your words.

DX: In the past few years, y’all have been focused on Slum Village, so tell me a little bit about the challenges and difficulties involved in establishing your own solo career.

RJ: The biggest thing is creating your own sound. And not locking yourself in, staying current. I think the biggest thing is that people assume because of me being in the group Slum Village, or being a part of the brand, that I’m 45 years old. When we started out, I was producing for Slum at 14 years old. That’s how the history of it started. Going from producing on records like “Climax” and learning underneath Dilla, the biggest challenge of coming out of Slum into my own career is having my own voice and creating a distinct sound that’s reminiscent to Slum in the work that I’ve done over the years and not having it dated.

RJ: It’s just like a person going in and starting as a producer. You kind of get your feet wet and that’s kind of the time I had to take as a writer and as an artist. Because a lot of the time, people jump out there and they really don’t have nothing to say. So, I make sure I have something to say. Because you have artists who are extremely talented now like Kendrick [Lamar] and [J.] Cole and so many others who are really saying something. I think that’s the main thing. I feel like now is the right time. I’ve lived enough to where I would have a perspective to offer.

DX: Speaking to that a little bit more … On your latest single, “Issues,” there’s some socio-political content that’s timely in light of everything going on in the world today. Is that a large presence on your album? Or are you looking to be more diverse?

RJ: It’s diverse. Of course, I have my songs that talk about what’s going on because it’s inevitable. It wouldn’t be right for me not to catch on with what’s going on in the last year or two years with the police killings and shooting unarmed blacks. Obama’s now gone, so what’s the next excuse that people are going to put on the plate for issues that the U.S. is dealing with? So of course, I’ma have those things that I’m touching on. Also, I have girl records on there that Slum are known for creating. I have stuff to party to. I’m expressing all facets of life, from relationships to partying, in my own way. And [I’m] just having fun with the music. I feel like that’s what it’s about. I’m not trying to follow no trend or what people are doing, I’m just expressing and whatever comes out that’s what it is.

DX: For this new project, how much producing are you doing? Is it all you still or are you working with others on that end?

RJ: I’m working with a couple different people. The majority of the album is produced by me. I got a new guy who I’ve been working with. His name is DaG. It’s really just me and DaG and a couple musician homies who I’m working with and crafting a sound. I’m not really trying to go out there and work with who’s the hottest. I just work with who I feel like can enhance and make the song better.

DX: Speaking of your production work, that’s what most people know you from. Can you speak about studying under Dilla, what kind of lessons you learned, what you’ve been able to do and what you’ve done to differentiate yourself and not be labeled a Dilla clone?

RJ: Well from Dilla, the most important thing was you can be inspired but you don’t have to replicate what you hear. Just take the inspiration and go into your own little vibe of what you do. Because of course, sitting down watching somebody like Dilla produce and work on tracks, you’re in awe. Because he taught me how to program and how to understand what I’m programming. I understand what it is I’m doing, why I’m doing it for a specific reason, not necessarily just experimenting. So you know, that’s the main thing I learned from him is just creative freedom. If it’s not what’s going on in the marketplace, [it] doesn’t mean that it still can’t be made. You know that you can always push the musical boundaries forward through finding new records to sample, new genres, new artists. There’s always something out there.

DX: Looking at the upcoming album, who can we look forward to you collaborating with? I know you had BJ the Chicago Kid on the lead single.

RJ: I got a lot of people man. I got some oldies but goodies. People who are just nostalgic and got dope voices. I don’t wanna say too much because if I say too much, all the surprises would be done. But the album is definitely done, right now I’m actually in the studio seeing if I could top some of the stuff on there. I’m just constantly working and adding to it. I got the joints like Pete [Rock] and Boldy [James], which is like a different combination. I’m working with whoever I feel like can make the song better.  The album is already done. I’m still creating to see if I can make it better and swap a song.

DX: Tell me a little bit about this final push to finish this album. What inspires you in the last stages of the creative process?

RJ: Number one, you see what the fans want. When you put a record out and the fans say, “I’m feeling it, I’m not feeling it,” you know exactly what the fans want. And the next thing is when you’re creating and you come up with the music, you come up with an idea and you say, “Man, this would fit perfect in this slot on the album. This is something that I ain’t touch on, and the beat fits with the album kind of. Let me jump in there and see if I can craft on something.” Because you always want to see if you can make the project as good as you can make it, so you can give the fans your best work. And that’s the beauty of iTunes and stuff like that. It’s not like you have to go into a pressing plant. You can go all the way up until and add a couple more songs to round out the project. You always wanna keep working the best you can because the fans been waiting this long, so you don’t wanna give them something that’s not 100% your eyes.

DX: You worked with Pete Rock and Boldly James on this LP. Being a younger member of Slum Village, is that something that’s important to you, bridging the gap between old school and new school?

RJ: That’s something that I wanna do. Because I think it’s misconstrued when I go online and see younger guys saying, “Oh man, they old heads.” I just think that dope music is dope music. And in the studio, we have these debates all the time. You have artists like 2 Live Crew, Snoop [Dogg], A Tribe Called Quest. You have a bunch of genres of music. It’s not anything different now when you got the Migos or J.Cole and other artists. I think being the younger member of Slum, my role is to produce the classic elements of what I grew up in, introduce them to the younger generation as someone who’s still young and bridge the gap. [I’m] not putting an age limit on what’s dope. Quincy Jones was well into his 40s when he worked on [Michael Jackson’s] Thriller. So there is no limit to somebody crafting and creating something dope. Me and Pete got good chemistry, and that’s somebody who’s like a mentor. He’s been mentoring me since Dilla’s passing.

DX: Can’t get a better mentorship than those two.  To wrap things up, I just wanted to get your thoughts on the album’s title. What does it mean to you and what inspired it?

In support of Young RJ’s debut album, Blaq RoyalT, Ne’astra Music is giving away a dope merch pack from their Slum Village store with a variety of items celebrating Young RJ, Slum Village and J Dilla.

To enter, follow @neastramusic and @hiphopdx and tag both of them in a tweet with #DXYoungRJContest. Winners will be selected randomly and contacted by DM. Good Luck!