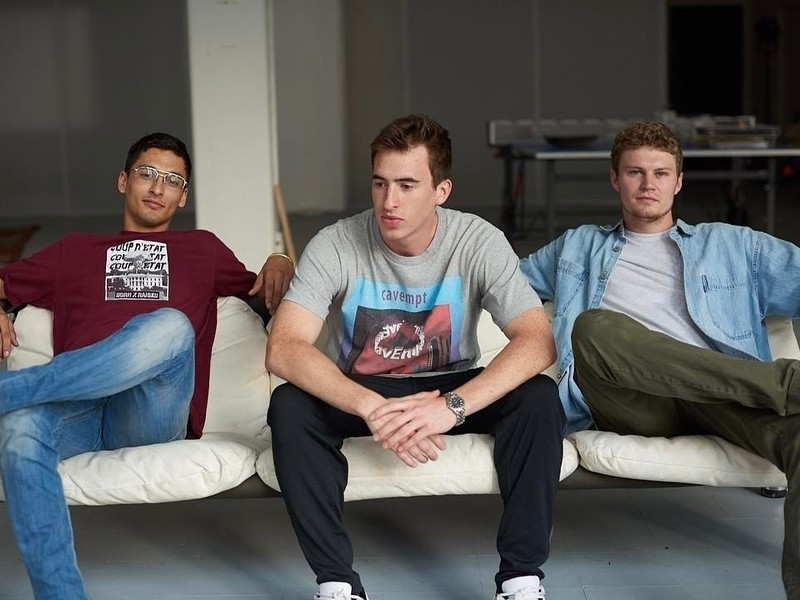 “Unforgettable” by French Montana and Swae Lee is undoubtedly one of the hottest songs of 2017. Not only did it peak at number three on the Billboard Hot 100, but it also sparked a viral dance challenge across social media platforms. However, when French Montana hopped on The Breakfast Club earlier this month, the Jungle Rules rapper had a difficult time remembering the names of the three producers behind the hit.

Introducing 1Mind, a collective from Indiana comprised of Sebastian, Mac and Michael. Earlier this month, HipHopDX caught up with the three producers at Electric Feel Studios in West Hollywood, California to discuss how they landed “Unforgettable” and their musical journey up to this point.

HipHopDX: Talk about 1Mind. How long have you guys have been making music? Obviously “Unforgettable” is your breakout. Talk about the journey to this point.

Mike: Well, 1Mind started out the three of us. I guess Mac and Sebastian linked up first. They knew each other, that was like 2012 or 2013. I linked up with Mac, he introduced me to Sebastian and we all started making music together. We’re from Indianapolis. The two of us are 23 [Mac and Michael] and he’s 22 [Sebastian]. There’s not a whole big scene in Indianapolis, so it kind of just took off from there.

Mac: I’ve known Michael since like fourth grade. We were always good people and we were basically just the only two people we knew who made music. Same with Sebastian. We just didn’t know anybody else who was doing it. So it kind of just made sense to do stuff together.

#DXclusive: the producers of #Unforgettable reveal the beat was originally for #Drake's "Views" ?? @1mindmusic

DX: Talk about the making of the beat. Because I believe it’s just you guys and Jaegen. Who started the beat first and how did we get to the end product?

Mac: I started the beat in April of last year [2016]. I started the beat because Oliver [El-Khatib], who is Drake’s manager, DM’ed us on Twitter and was like, “We’re finishing Views. We want some more beats, so if you guys have any last minute submissions, send them now.” So I just went and made some quick stuff for them. The first one I started working on for that session was the “Unforgettable” beat. I sent it back to them and they were like, “This is really dope, hold it.” They didn’t pick it, so I sent it to Jaegan, the other producer, and he kind of added a lot of parts to it. We sent that to CP and CP got it placed with Swae.

Mike: I know Jeremih had it, and I think he’s actually the one who played it for French. And then French said “mine” and grabbed it and added his little sauce on it. [Jeremih’s] not on the final cut. I know there’s some leaked versions where he’s still on it. But the final record is Swae and French.

DX: Wasn’t it supposed to be Swae Lee’s track?

Mike: Yeah, it was originally Swae. Swae wrote the track then it got sent over to French. And then French liked it. He added a verse and then they dropped it.

DX: So. how many phone calls y’all get in a day?

Sebastian: DMs. Usually, it’s a lot of nonsense. People just hitting us up being like, “Yooooo!”

Mac: Some people just hit us up being like, “What do you do?” If that’s the message you’re sending us, I don’t know where to start. [laughs]

DX: Obviously, French Montana kind of didn’t know who produced the beat at the time of his Breakfast Club interview. He semi-apologized by shouting you guys out. How do you feel about him not knowing?

Mac: I wasn’t surprised. None of us were really surprised. There were a lot of people working on it. It got passed around to a lot of different hands. A lot of times, the producer’s not in the studio with the artist when the song is getting made, so I can see how that could happen, especially when there’s three names on the beat. I could see how you could not have that just to pull off the top of your head in an interview. But we’ve gotten a lot of reaching out to us just because of the story, the fact that he forgot about it on the show. I can’t say that we’re unhappy about it. It’s worked out for all of us.

Mike: It doesn’t really … it’s not a big deal. We’re getting the love that I guess you could say we deserve. I don’t think we deserve any more than we’ve gotten already. File changes get changed immediately. You send out a beat and then somebody else sends it and they’re like, “We’re just gonna change this.”

Sebastian: The Breakfast Club interview was mad early, know what I mean? French probably isn’t the earliest bird, probably wasn’t on the top of his mind. So, it’s life.

DX: I didn’t find the clip until Sonny Digital had retweeted the post and was reiterating the point that producers don’t get the respect that they deserve and there needs to be a producer union. How do you feel about that?

Sebastian: We’re not going to be the ones to initiate that whole thing starting. I’ll leave that to Sonny Digital. But I really fuck with him for trying to bring that to light. It’s a good thing, you know. But I don’t think any major actions are being taken towards that. You know, just keep cranking out beats and you’ll be straight.

Sebastian: These days, there’s not one singular way to get a record or get a track placed. You can either have that relationship with them, you can be in the studio with them or you could just be sending out random emails. Or you could have a friend that knows them. Our main thing is just make the best music possible.  Get in with dope writers, dope artists and we’ll go from there. I think we have good relationships. People support us and help us out.

Mac: Yeah, I mean we’ve been able to use the success of “Unforgettable” to get the support. More people are sending our records out, like the studio we’re in right now, Electric Feel. They’ve been really supportive of us. And we translate that into more support and it helps everything move faster and smoother.

DX: So what’s next for you guys? They always say you’re only as good as your next hit. What’s the follow-up?

Mac: We have a lot of stuff we can’t really talk about because it’s not for sure. We’ve made a lot of songs for artists and we don’t know exactly what they’re gonna do with it. We can’t speak on too many things, but we have a song coming out with Ramriddlz and Safe, another artist from Toronto. We have stuff on his project. We’ve been linking up with a lot of producers like G Koop, the guy who worked on “Bad and Boujee.” We did a lot of stuff with him recently. Bizness Boi [too]. Just a lot of producers, so we can make the best tracks possible.

DX: You talked about “Unforgettable” was, technically, originally for Views?

Sebastian: “We had a session. They mentioned in the DMs that they were doing the last Views session. So it was inspiration to start making something and then it ended up not being that.

Mac: We worked a lot of Toronto artists. So we had some contact with OVO just about them hitting us up for production. They’d been doing that for a few months. Then when Views came out, they were just asking us for a few beats. That was kind of how it went down. After they sent us the message, that’s when I went and started the beat initially.

DX: It seems like you see how Toronto’s scene is influencing the pop sound and what’s going on over here. You guys have worked with Toronto artists, so what is it about that city in particular that gets you guys?

Sebastian: Well one, they have two of the biggest artists —  The Weeknd and Drake. Also [Justin] Bieber. It starts from there. Those two guys have their own camp and their making a whole bunch of music. Weeknd has his own camp and he’s making a bunch of music. And then from there, they have producers and artists under them. They’re influencing everybody. I think one thing they brought back was that 90s sample R&B. I think everyone’s kind of doing that now. They brought that back. They definitely helped out with the dancehall. They’re always ahead of it. It’s a multicultural place. They have a bunch of influences. They’re always ahead of the curb. They’re all pretty nice. They’re all good guys.

Sebastian: I don’t know what that was about. Somebody was asking for a sample clearance for $350,000 but there’s no samples in the beat. I think that was, once again, early Breakfast Club interview. I don’t know where the $300,000 figure came from. But that’s a lot of money.

DX: Before we wrap this interview up, you got any last words?