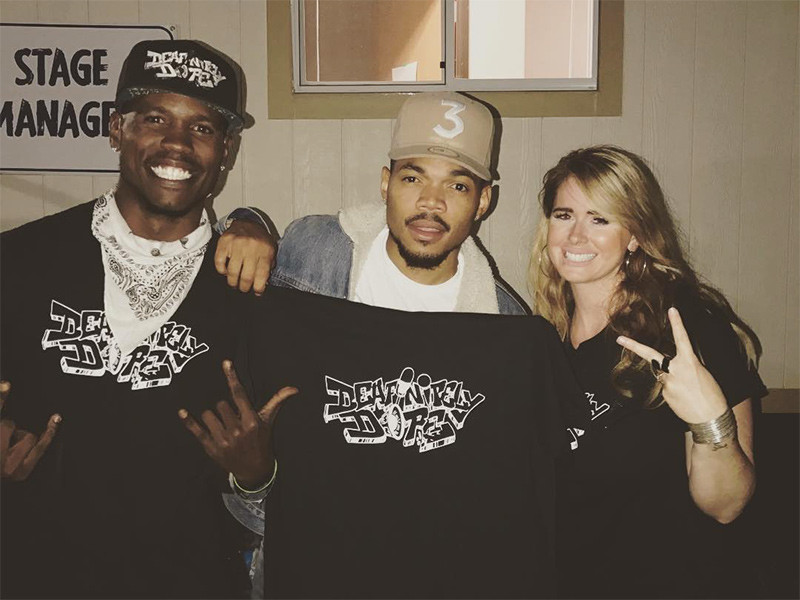 Chance The Rapper took a major step toward equality when he hired American Sign Language interpreters to join him on his current tour. The “No Problem” MC began employing the ASL team known as DEAFinitely Dope earlier this month for his show in Tampa (June 14) and plans to bring them along for his remaining gigs in 2017.

The Fight For Equality

While most people have likely seen videos of rap interpreters at festivals, Chance is the first rapper to make them a key part of his regular tour dates. The Chicago native is now ensuring that all of his concerts are accessible to deaf fans.

“I don’t think the hearing world understands the struggle of a deaf person’s life,” Amber Galloway-Gallego, one of the most experienced rap interpreters, tells HipHopDX. “Daily they’re fighting for the basic human right of communication in every aspect of their life. All they want to do is move away from that and be entertained by their favorite rap artist or musician. If artists were to pay attention and say, ‘I want you to have access no matter who you are,’ and guarantee access, that is truly making it equal. But right now, what happens is most of the deaf community going into concerts are fighting for access and not getting it. We hope Chance’s actions can change that.”

Chance was introduced to DEAFintely Dope when he saw Matt Maxey, the organization’s founder, interpreting at the 2017 Bonnaroo Festival. Maxey is deaf but used hearing aids and communicated through speaking while he was growing up. It wasn’t until college that he got his first exposure to the deaf community.

Maxey practiced his signing by listening to songs and putting together signs to keep up with the music. Soon, he began recording himself and uploading the videos to YouTube. His online following and exposure from a freestyle contribution to Damian Lillard‘s 4 Bar Friday series allowed him to create DEAFintely Dope. Six years later, he’s working with Chance to bring live Hip Hop to the deaf community.

“It’s always about the feeling,” Maxey says of interpreting rap concerts. “When you see the music, you see the interpreter, you understand a lot more because you finally get an idea of what is all going on. When [deaf people] go, they can feel that sound. They can feel the vibration. But when you have an interpreter, you get a lot more. And that’s why Chance putting deaf fans in the front row and giving them the best show possible is important. It establishes a standard for shows going forward. There’s not many that provide that access for other members of more minority communities like the deaf. We’re hoping he’ll be sort of a pioneer. This move that Chance has made is gonna change the way people look at the music experience for the deaf community. It could help bring more access to communication for deaf people in daily life.”

The slang, metaphors and adlibs involved in rap seem like a difficult challenge for interpreters on the surface, but the DEAFinitiely Dope team sees it differently. Maxey and his fellow interpreters fully embrace the nuances of Hip Hop.

“It makes it more fun,” Maxey explains. “I’m pretty familiar with regional slang and used to adlibs, so it’s automatically a habit to include that when interpreting music. When you hear it as a hearing people, you’re like, ‘Oh yeah, I fuck with this.’ So for me to leave that out while interpreting would take away from the song. For example, [Takeoff’s verse on “T-Shirt] Water faucet, there’s more fun to show what they actually meant by it. If you show the movement and you have fun with it, it’s important to take the slang to another level. Stuff like Rap Genius is very helpful to break down a little bit more in case I don’t understand. With slang, you’re really trying to show what the word means and you won’t be able to spell out the word if you’re interpreting. Like with the water faucet example, you put the picture out there instead of just ‘neck water faucet.’ If you’re not literal and show what the water faucet is referring to, it’ll make it more of a story. It’s more challenging, but it’s more fun to do and it makes it more interesting to watch.”

@chancetherapper is bringing @deafinitelydope ASL interpreters with him on tour. Check out DX for the full interview about the art of rapping in sign language. Link in bio

When it comes to the actual shows, a lot of preparation goes into accurate signing for the fans. The team of interpreters must study and memorize lyrics as well as adapt to any new songs that may be performed.

“We listen to all the music and we divide the songs,” Kelly Kurdi, another member of DEAFinitely Dope, says. “We call it divide and conquer. So, we already have prepared songs before the concert. We get that information based on setlists and past concerts. When we get there, the setlist is always pretty close to what we practiced. Occasionally there’s a song or two that is different. Since Matt is deaf, he doesn’t normally take on new songs at the last minute. He has to follow what he’s memorized and what he can hear during the concert. Amber or I will take on the songs that are new. But for the most part, we’re already prepared. We’ve listened to the songs. We’ve researched what Chance meant behind the lyrics to make sure it’s accurate. We have an inner ear monitor and we ask for vocals only so that we have the best opportunity to hear Chance’s vocals so that our interpretation is accurate.”

The interpreters also have to check to see if the venue has a platform where they can be seen and provides the correct lighting. Since there are no interpreters at the entrances, they often must help get deaf patrons to an area where they can see them as well as the artists. Although there’s lots of hard work involved, it’s incredibly rewarding.

“For many people that have come, they told us it was their first concert,” Kurdi says of the feedback. “Some of them didn’t even know it was possible to have sign language interpreters at a concert. And to have one of their own as part of the team interpreting is really inspiring.”

Chance is offering 50 free tickets to the deaf and hard of hearing for his remaining shows. To attend, email Kelly Kurdi at DEAFinitelyDopebookings@outlook.com, text 832-551-7041 or submit a request on DEAFinitelyDope.com.