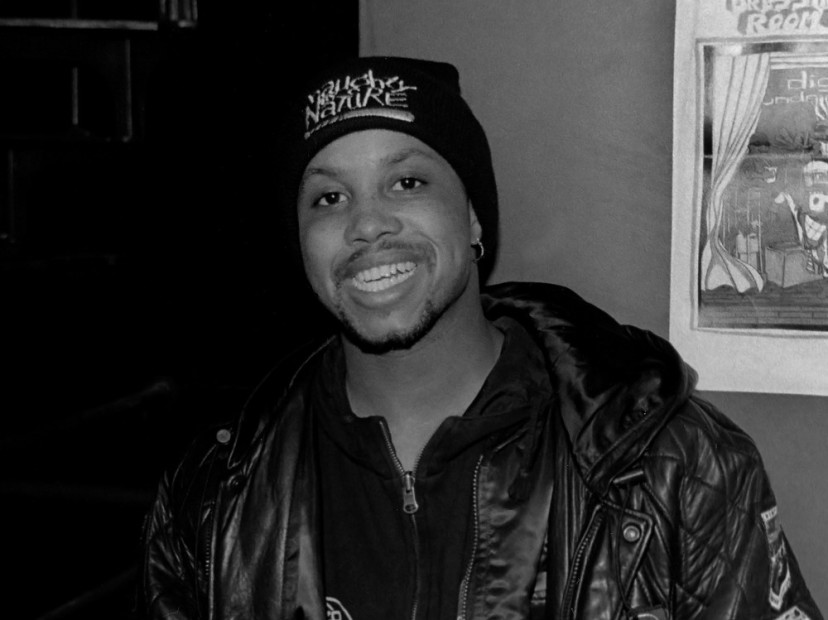 Digital Underground was one of rap’s most popular acts during the early ’90s. The seminal Oakland crew aesthetically represented the Bay Area’s image of unabating party lifestyle, sexual freedom and an ethnically diverse population, while their music reflected the national hub for political activism. Their greatest contributions to Hip Hop covered a wide spectrum, from the slapstick comedy of the Groucho Marx-like caricature Humpty Hump to former bandmate and late rap revolutionary Tupac Shakur.

The group’s iconic lyricist and hypeman Money B was there to witness the humble beginnings and rise of Tupac’s recording career and much of his short adult life before he passed away in 1996. As detailed in his new book Hype Man: The Money B Story, and as portrayed in a role as himself in the new Tupac biopic All Eyez On Me, Money B and Tupac were kindred spirits as close friends and their ties were strengthened by their politically charged stances after being raised by Black Panthers.

Money B spoke with HipHopDX about how the platform for Tupac in Digital Underground was open for his talents as the group’s stock rose with early hit records, his feelings on Funk Flex claiming that Tupac lied about what happened at the infamous 1994 shooting in NYC’s Quad Studios, and why this Tupac film is better than the barrage of Tupac documentary films released since his untimely death.

As for the Humpty Hump character, we fooled people because Shock [G] has a brother who looks like him. A little bit shorter, but enough to where both of them would be at shows onstage together. And he also had a few of his friends who would do photo shoots with us and when they would put on the nose, they could pull it off too, if they had the right complexion [it could work]. Shock’s brother played Humpty in the “Same Song” video. Humpty Hump is a fictitious character like Batman or James Bond 007 played by Roger Moore, or Pierce Bronsan. “The Humpty Dance” video we shot like a week or two after that huge earthquake in San Francisco in ‘89 during the World Series. The bridges were out and people had to travel out by the ferry from East Bay, and we didn’t think people would show up to the video shoot at all. But they did.

He was never a backup dancer. He was always an MC and was doing shows, and was already working on his own solo project. He started with a group called Strictly Dope. They dissolved but he stayed signed on with [Shock G’s former manager] Atron and TNT Records. But things weren’t moving fast enough and as [we] were heading out on our first tour in the states, Atron asked if he could go with us. We brought him out, so his job was to fill in the blanks and do what was needed. He would help break down the turntables to set up or pack up the equipment, or spit a few bars during our shows. I know he used to do “Packet Man” with Humpty during the show and then spit some of his. And when it was time to do “The Humpty Dance” or any other songs with dancing for it, he would do those dances. But the thing about it is every time he was dancing, I was dancing. But they never considered me a backup dancer. I was just as much, if not more of a dancer, than Tupac was.

He wrote that song completely, and it came from an article that he read in the New York Times. And he felt strongly about that story about a young girl putting her baby in the dumpster. I was in the studio with him because we would be in each other’s sessions. And actually, Dave Hollister sang the middle part of the song. Dave just happened to be in the studio with me. And Roniece Levias, the chick also on the hook and a member of Digital Underground. They were harmonizing for the song. So we were all just in the studio just hanging out, and he was like, “Yeah, go do this part.” He had an idea for me to be on the track, and I just said what he wanted me to say and told me to do it like this. I sang and did a lot of adlibs to a lot of those songs he did because our sessions were always together.

The Making of Tupac’s “I Get Around” Video

We shot that in Malibu at this mansion that was rented by this Ethiopian chick. That house was given to her by the many who owned it. This guy owned like nine mansions or whatever. She was one of the housekeepers and he eventually gave her the house. She rented it out to us. She’s actually in the video on the tennis court. I just showed up, drank all the liquor and touched on all the women (laughs). One of the funnest days of my life. Too much fun.

I feel like it’s old. Why are you even talking about this like 20 to 30 years later? You didn’t say it then. How does it affect the culture or what does it do? Why are you even bringing this up? What are you looking for? I just don’t know what his end goal is. The only thing that it could do is discredit ‘Pac’s legacy. And maybe because he was friends with Big and he felt that way but with saying that about ‘Pac, what are you looking to get from it? It’s not gonna change anything. So I kinda look at Funk Flex as just a hater and an aging fool that still wants attention any way he can get it. I could easily go on a rampage but I don’t want that type of attention. I’m too old and so is he. Right now at our age, we should be trying to build, you feel me? Even the people that I’ve had run-ins or problem with in the past, I don’t anymore because I don’t hold onto that stuff. It’s about building and respecting what happened. Let’s look at the great things that anyone has said and done and let’s teach the youth because some of them want to know what happened, but why bring up that part? What’s the value to the culture? And for the fact that it’s not true, so for what he’s saying, he doesn’t even know if it’s true because he wasn’t there.

This movie takes you from the time he was born to the time he passed away. It’s his entire journey. The story is told from 90 percent of interviews and hours of documented video of Tupac telling us exactly what happened. So whatever is coming out on this, he told that story. For instance, during the Digital Underground part of the film, I was a consultant for that part to tell the crew for the scenes like “Hey wait, we didn’t do it like that. It wasn’t like that. It was like this.” The director Benny Boom and LT Hutton one of the executive producers were really open to us for things like that to happen. And the Outlawz, EDI Mean and Young Noble who were there for the whole Death Row period [of Tupac’s career], they were consultants for those scenes. So it’s very accurate down to making the scenes. Like Starlight Studios where our early records were recorded, the studios in the movie look exactly like it. Or when it showed him living in the jungle in Marin City, they found a place that looks like the jungle in Marin City. The casting was fantastic. The locations were brilliantly picked. It’s crazy reliving through scenes in his life that he personally told me about along with scenes that were from my life. You feel like you’re on that journey with him. Tupac has so many chapters and different parts of his life. There’s not one person that took the entire journey other than ‘Pac. That includes his former group members. There is no person who was with ‘Pac that entire time. But [it was made partly] by those who shared those chapters in his life.

She is an executive producer and the estate is definitely reaping the benefits of the movie in a major way. Obviously, the word out on the street is that she wasn’t happy with the film. It was more legal issues and misunderstandings, lawyers and advisors— you know when you have a lot of money on the line and a lot of voices in your ear it can get complicated. And for [Afeni], anytime that her son was brought up, it just reminded her that her son was gone so that’s always going to be painful. Anytime that a new album came out, a clothing line, or a new opportunity to commemorate him, she was reminded he wasn’t with her. I can only imagine how hard that is to grasp. So there was some resistance. But the movie was done magnificently.