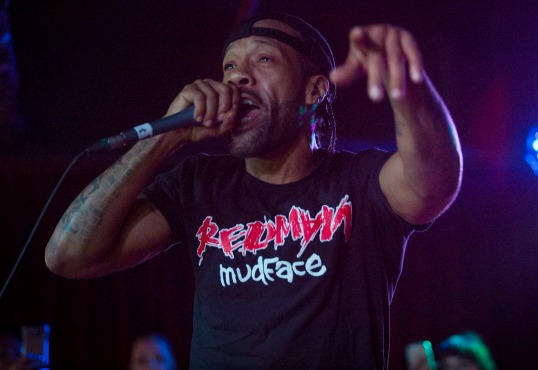 Redman understands he’s one of the most underrated MCs of all time. Also he understands that millennials familiar with him may only recall as far back “how high” his brand reached into the mainstream with his fellow blunted baron Method Man as this generation’s “Cheech and Chong” at the box office, their short-lived primetime TV show on the FOX network, or as former pitchmen for Right Guard deodorant.

But for those who witness his emergence from EPMD’s Hit Squad during the early nineties, we can appreciate his indelible mark on the rap game going 4-for-4 during the Golden Era in Hip Hop. Redman was an arbiter of über-cool Timberland-stomping East Coast boom-bap tinged with funk flavor on his landmark debut Whut? Thee Album. Then he went left to create ominous psychedelic funk with a “cosmic slop” flow on his seminal sophomore album Dare Iz a Darkside (where he later admitted to being mentally and creatively lost). He continued the legacy of legendary American “Red” comics by channeling the vaudevillian slapstick humor of Red Skelton and ghetto-centric vulgarity of Redd Foxx on his 1996 masterpiece Muddy Waters. Two years later in 1998, he paid homage to his rap influences Ice Cube and Beastie Boys whilst being experimentally progressive on Doc’s Da Name 2000.

His signature vocal delivery akin to a WWE superstar, moshpit-inciting style, multi-syllabic wordplay, impeccable timing for comic relief in his punchlines, and uncompromising his character have collectively made Funk Doctor Spock atop most rap purist’s lists as one of the best to ever do it. And most notably, Redman was the prototype as the “Brokest Rapper Alive” king of the underground, a badge of honor he held before the late greats Ol’ Dirty Bastard and Sean Price had eschewed nouveau riche imagery that their rap peers boasted for commercial radio airplay.

We spoke to Redman about his days as a squire coming from under the wing of EPMD’s tutelage, his upcoming release with DJ Jayceeoh about their collaborative EDM-focused 1000 Volts album, the tragic Irving Plaza shooting, his recollection of MC Hammer confronting him for dissing the former rap megastar and his mother on Whut? Thee Album, and where he sees rap music and Hip Hop culture today. The 46-year-old New Jersey representative shows no signs of letting up in his middle age, and still can’t wait to get it on for his fans in 2016.

Redman Is 46 & Still Down For All Types Of Aksion

DX: What was the greatest lesson that you learned while paying your dues under EPMD?

Redman: I would say quality control. Making myself an asset instead of just an artist. I learned to work everything in the studio. From the turntables, I can get on a piano and play something, i can get on there and play drums, I know how to operate everything in the studio. I made myself an asset to this Hip Hop game. So they taught me stability. They taught me longevity. And [E] taught me how to be funky. I was already funk, but he put some funk in my game. Big up to EPMD!

DX: Your third album Muddy Waters turns twenty this year. Many of your fans consider it to be your best work. Where do you believe it ranks within your entire catalog?

Redman: Muddy Waters is one of my favorites, because it was my junior album! And it was more like a proving ground for my existence in the game. We all know your sophomore album is the album that will prove you will have a little longevity, but Muddy Waters was a breath of fresh air, out a dark tunnel I was in! I was really trying to find my path and Muddy Waters helped me, with the great production of Erick Sermon. He was in his prime with EPMD and other businesses. Muddy Waters is a classic! But I’m looking to give you that same feeling on Muddy Water 2. Stay tuned!

DX: You’re going left from your core work in rap to do an EDM album. What should your fans expect in the new 1000 Volts collaborative album with DJ Jayceeoh?

Redman: 1000 Volts is just something that we put together real quick, man. We just got so much good feedback from people about songs that we were doing for free. Like all the work you hear, we’ve been just putting that together and throwing them out for free because I like his work ethic. He works hard in the studio. I try to surround myself with people who are smarter than me, or work just as hard or harder than me. I was throwing him vocals just to throw out for free anyway. So it’s just that we finally decided to put a project together called 1000 Volts. What you can expect from that is a clash between Hip Hop and EDM because Jayceeoh is big in the EDM world. I’m big in [my] world. And we’re just going to create a different kind of feel of general music. I’m a well-rounded artist. I’m into all types of music. I don’t like just Hip Hop. I’m into all kinds of shit.

Redman: I remember when you did that collaboration song with (UK drum and bass artist) Roni Size “Red’s Got a Secret,” the last track on your Doc’s Da Name 2000 album.

Redman: Yeah, exactly. See, that’s what I’m talking about, my nigga! I just want to see what we create when we come out. 1000 Volts, check for us.

DX: What’s the one thing that you have either given up or minimized as a habit now that you’re in your mid-forties?

Redman: Pussy! (Laughs) No let me stop. That’s unheard of to give up pussy. I’d just rather just fall out and stop rapping. But actually, my allergies. I had the baddest allergies when I came in the game. That’s why I had tissue in my nose on the first album because of my bad allergies, and I learned how to control it. Now I’m breathing well without the tissue.

DX: Do you agree with MC Hammer stating “Hip Hop is in good hands right now” with artists like Chance The Rapper, Kendrick Lamar, and J. Cole as chart-toppers representing the genre well?

So, again, big up to Hammer. Big up to Kendrick Lamar, J. Cole, those particular names that, you know, I guess he coincided good Hip Hop with Kendrick Lamar and J. Cole together as paralleled because they are doing a good job. They’re not using Auto-Tune, you know who they are when they get on the mic, and that’s what people want to hear. They want to hear lyrics. They don’t want to hear a song that’s just played on the radio 80 times a day. So Hammer knows what the fuck he’s talking about. Big up to J. Cole, Joey Bada$$, Kendrick Lamar and the whole TDE crew. I bang their shit. ScHoolboy Q, what’s good? You already know. And big up to everybody that’s doing it. Wu-Tang, Def Squad, we still doing it. Erick Sermon, Keith Murray, Redman in the building. Find me on IG @redmangilla, Twitter @therealredman, and my website.