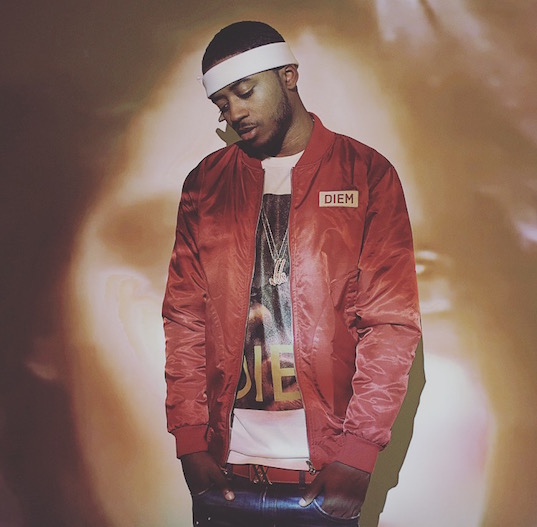 Yeezy recently jumped over the Jumpman with some serious in-studio assistance. A quick perusal of the credits for Kanye West’s latest album, The Life of Pablo, illuminates a laundry list of talent consisting of songwriters, singers, producers and engineers.

Before the album endured more name changes than the Witness Protection Program, there was a lead single in “All Day”; a familiar–yet effective–energy shot of a record that ended up netting a couple of GRAMMY nominations for Best Rap Song and Best Rap Performance at last Monday’s awards show.

One of the record’s songwriter’s and co-producers, 24-year-old Tyler Bryant a.k.a. Velous, instantly made his presence felt amongst music titans West, Paul McCartney, Diddy, Theophilus London, among others. So much that after “All Day” was nixed from the eventual seventh West project, the enigmatic Hip Hop legend had to reach out for more of that heat.

Hailing from Upstate New York (Kingston to be exact), the budding artist chopped off the “mar” of the dazzling adjective to create his studio name and has been on the elevator path to success since getting his start back in 2011. After earning a name for himself with Swanky Music Group working with the likes of Tyga, Jeremih and Fabolous, French Montana signed him to his Coke Boys imprint where Velous is currently working on his studio debut, The Disco.

HipHopDX recently caught up with Velous to analyze how working with Kanye can landscape a new career.

HipHopDX: How did it make you feel to come out the gate and see something you put your signature touch on get such a recognition? Has it been a whirlwind so far?

Velous: I was definitely grateful [for the look] and it’s something that I’ll never forget.

DX: Do you feel that you are making an instant impact in music?

Velous: Yeah, I mean I feel like I’m just getting started right now. But it’s good for lining everything up and I’ve just been pacing myself. I feel like I’m hitting the strides that I really wanted to make but I think that everything thus far has been received the way it has.

DX: What were your initial thoughts when you saw “All Day” didn’t make the final cut for The Life of Pablo?

Velous: I didn’t really have any expectations. And I just kind of just treat life like that. I just roll with the punches. But to be honest, I wouldn’t even want to see “All Day” on [the album]. For the simple reason that everything that happened with it and how special that it was, I think it was better standing alone and not being part of the actual compilation.

DX: Do you think that was Kanye’s thought process for putting it on the tracklisting?

Velous: I don’t know. It could be. A dude like Ye is such a genius, you never know what his thought process really is unless he just comes out and says it. But I could see that possibly being the case.

DX: Tell me about these sessions. What was your experience like?

Velous: It’s so crazy, I’ve never worked with him in-studio yet, bro.

DX: He trusted your ear and sound without even sitting down?

Velous: Yeah, everything we did was sent back and forth. He heard the “All Day” beat hanging out with Big Bro [French Montana]. As far as “Highlights,” they actually contacted me like, “Yo! Ye really, really likes your style and they want you to work on this,” so he sent me vocals for to complete the track. That was like the same week “All Day” was made. I just try and feed off the energy and those vibes when people tell me stuff. At the end of the day, I feel like all we are is vibes.

DX: Do you actually do any production yourself?

Velous: Yeah, I produce everything myself. I most do things from the keyboard. So my drums and other sounds get beefed up with the keys.

DX:Tell me about The Disco. That name clearly sounds like you’re aiming for the opposite of R&B and Hip Hop.

Velous: [Laughs] It’s not. What it is, is The Disco is not pertaining to the genre but more of vibe. When I think of a disco, I think of a party and people celebrating and having a good time. And that’s kind of what my project is about. Plus it’s kind of going off my [nickname]. They call me Disco Vel or Young Disco and they call me that because I got the records. So my project is very much in between rap and R&B. It’s not traditional R&B and it’s not full-blown rap. I don’t call myself a singer or a rapper. I really don’t even call myself a producer; I only do it sometimes for the sake of technicalities. At the end of the day, I just call myself a vibe and get it when I fit in.

DX: After one hears “Sex and the City,” there is definitely an unmistakable vibe. Is that what the project is shaping up to be?

Velous: That’s one of them and that’s probably the closet to R&B that’s on the project. I don’t even know how to explain [the album] but it’s just a vibe. Sonically, the bounce is there and I haven’t really heard people with a bounce or trap-drums-and-guitar like this.

DX: So now what’s the thought process behind creating an album like this? With your talents, you could easily hit the current R&B lane, which, people could say is arguably beating Hip Hop right now–and getting fans that way.

Velous: Honestly, I just wanted to do what was natural. And what feels right. There really wasn’t much a thought process behind it just for the simple fact of having years studying someone like Quincy Jones or Pharrell or Timbaland, it’s already in me. So it was just about catching the flow; catching the vibe and creating shit that I felt and I felt other people could feel too.

Velous: I just balance it by living in the studio. Some of the stuff I do by myself is completely different than what I would do with somebody else. I’m so vibe-driven, it’s all about the moment. I just acclimate with the environment. With French, it could be something street–and I’m ready for that. Or I could go in the studio with [Coke Boys President] Zack and we’ll do something that is real flow-driven with a bounce. When I’m by myself, I can go in and do something that’s real mellow or when I when I would go in with Chinx (RIP) and do something like “Dope House” that was really for the street. But there probably is only one day out the week where I’m not in the studio so I have that balance.

DX: What is your musical upbringing like? Artists can be in the studio day and night but without the intuition, they won’t get far.

Velous: I was definitely raised on Michael Jackson and Stevie Wonder. Earth, Wind & Fire–rest in peace Maurice White. I used to play the instruments in church too. I started playing the drums, piano and guitar when I was young so that definitely helps out with my production and everything.

But you know, where I’m from, we don’t even have our radio. The radio that we do have is like pop radio. It helped me to learn how to be diverse. Because when I would go to the hood and hang with my niggas, there was hella mixtape stores since we didn’t have urban radio. If you were influenced by the Hip Hop culture, you would hang out by the mixtape store to soak up game.

“Sex and the City,” the first taste to The Disco, can be heard below.