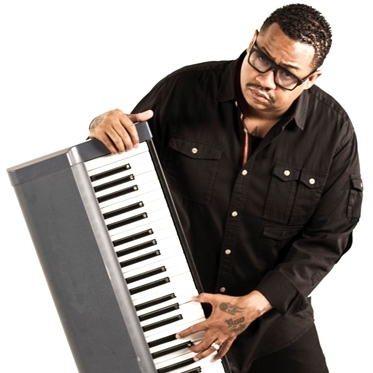 Focus... Answers If Kendrick Lamar’s “To Pimp A Butterfly” Had An Effect On Dr. Dre’s “Compton”

One producer within Hip Hop who understands the rewards of patience is non-other than Focus… Spending years under the wing of Dr. Dre, his main objective was the eventually discarded Detox. Doesn’t hurt that between then and now, he’s managed to earn a few gold and platinum plaques, a few Grammy awards and high-profile production spots for highly acclaimed artists ranging from Beyonce to Busta Rhymes.

However, the big project with Dre was the goal. Eventually leaving Aftermath in 2008, he would later rejoin the home of Eminem and Kendrick Lamar for work on what would become one of 2015’s greatest releases in Compton: A Soundtrack By Dr. Dre. For all the hard work done on the canceled Detox, Focus… managed land production credits on nearly half the iTunes exclusive. Speaking with DX, the producer explains his role in D.R.E.’s grand vision for Compton.

Focus… Talks The Success Of “Compton”

DX: Compton is winning at the moment. How do you feel about the reception?

Focus…: It’s amazing man. We found out about the pre-orders. No one had even heard the music and we were number one on iTunes. It’s been amazing since then.

Focus…: We gave you a song for each year.

DX: Must be nice to be a part of something so grand though right?

Focus…: It’s been the biggest blessing. I’m proud of my mentor Dre and the music we’ve put out. A lot of people tried to undercut us and tell us we weren’t going to put it out. This is especially with knowing how much of a perfectionist Dre is. But uh, we put it out to the masses and it was a very huge accomplishment for the entire team. We’ve been celebrating since.

DX: When Dr. Dre announced the project, he mentioned being unsatisfied with the work he’d been doing on Detox. Since you’d had a hand in the production on the scrapped project as well, what was it like watching the transition between?

Focus…: I don’t think there was a transition. We were working for years bro. My first project at Aftermath when I signed was Detox. I was signed back in 2001. I was working on that for about seven or eight years. Just working on that one project.  We were never pinpointing the beats or the soundscape that he was looking for from Detox to Compton. It was Detox; it died, then we had to marinate with the fact that we weren’t going through with it anymore. I left Aftermath for some years. Coming back now, he felt inspired by his work on Straight Outta Compton and Compton was born. It wasn’t really a transition or anything.

DX: From your perspective, when did Detox officially die?

Focus…: I don’t know bro. For me? Around 2008 when I left. In my opinion, it got really frustrating because I never wanted The Doctor to ever think that I was frustrated with him but, we weren’t putting out any music. For me, it was about 2008. The whole thing kind-of died for me.

DX:  Getting back to your work on Compton, you’re on nearly half the album production wise. Let’s start with your work on the intro which feels like opening credits to a film.

Focus…: Alright, that first part is from Dante Winslow and the intro is in two parts. Winslow is an amazing trumpet player and he put that whole thing together. The next part where the commentary is, that’s my part with Trevor Lawrence. And, we had Bluetooth and a couple of other guys assist. It was a sample that I made. I triggered it and Dre was like, “What is that?” And, that became the intro. That’s literally how it happened.

DX: Crazy because the intro really feeds into the first track “Talk About It” which you aren’t featured on.

Focus…: I did “Loose Cannons,” and five other songs.

[A drives by playing Compton]

DX: What specifically did you add to the overall project?

Focus…: I really just tried to be a team player. This was my season to learn how to collaborate. I’d never collaborated before. This was the first time I was apart of a team. I really just played my position. I really didn’t try to overstep my border and boundary. This is the first time Dre let me take a go at mixing. So, I co-mixed a little over half the album and go credit for that. I think I’m going to try and make that transition. I’ve been nudging Dre like you’re going to have to let the student grab the stone from the teacher’s hand. I’m really stoked about the hard copy coming out with the credits because it’s a great calling card.

DX: When did you get the call from Dre saying he was ready to go for Compton?

That’s what really happened. He was like, “Yo, if you want to make music, we’re here.” I told him I was ready to work. We came out here and really just started making music. There was no Compton and nothing on the board. It was just about making music. He was just looking to be inspired. I think that’s what made Compton, Compton.

DX: What did you learn from Dr. Dre, during that time before you left in 2008?

Focus…: Everything about my career, how I attack music, how I mix and why I’m meticulous about what I put out, I learned from Dr. Dre. Next to my father, he’s one of my main mentors. Dre being as articulate and meticulous as he is, I try to integrate that into what I do.

DX: I totally understand because the mixtape you did with Marsha Ambrosius with Yours Truly  is one of my favorite R&B mixtapes ever.

Focus…: Thank you! And that was six months of work at Aftermath.

Focus… Answers If “To Pimp A Butterfly” Influenced “Compton”

DX: One of things one can notice off the bat was the cinematic scope of Compton. What did you specifically add to each track you were a part of.

Focus…: Good question. Nothing was about me. So nothing was about my style or anything like that. Like I said, it was about me playing part of a team. It was really important to be the best team player I can be. On one day I would be Kobe or Jordan. The other, I could be Rodman or Pippin. It’s about what play the coach is giving out and playing the position. I never really went into any session and thought I’m going to body a session. It was about what Dre wanted.

DX: Could you pinpoint request made by Dre that you needed to fulfill?

Focus…: He wanted us to be creative. It stopped being a rap project earlier on and became an art project. it stopped being about the music and became more about the art. Dre was like, “I want every record to be an experience. I didn’t want it to be you come on for a verse, then I come on for a hook, then I do my part.” He was like, “Look, bring me something that’ll drive me to be creative.” When we did “Deep Water,” which is one of my favorite records I had a part in, it was me, Cardiak, Dem Jointz and DJ Dahi putting everything together. Dre heard it and started orchestrating it saying he wanted waves instead of crashes. We had a buoy in there and seagulls.

DX: And a man drowning.

Focus…: And we have a dude drowning. All that stuff was from his mind. He didn’t want just regular stuff. Like the guy that was drowning was Anderson .Paak and he used a water bottle to drown himself. So if you were there, it was the most amazing performance I’d seen on the mic because he was drowning himself. He was drinking the water and actually sounding like he was going underwater. It was super dope but, it’s all cinematic.

DX: One of the biggest things people notice about Compton is how far of a departure it is from The Chronic and 2001. Do you know where Dre’s mind was at creatively for the album?

Focus…: He’s been saying this on The Pharmacy and to us regularly that he’s just having fun. We didn’t go in with a preconceived notion of how the album would sound. He just wanted to enjoy making music again. One of his biggest loves is music. For him to go in there, miss it and attack it the way he did was about the love and fun aspect. He didn’t put this out to sound like The Chronic  or to live up to the notion or aspect of Detox. We just went in and put out music. And, we had a blast with it.

DX: Was there anything you guys were listening to during the creation of Compton?

Focus….: I don’t know what anybody else was listening to but my favorite album right now and has been for a minute is Kendrick Lamar’s To Pimp A Butterfly. Kendrick’s album came out and it really resonates with me in a real way. I can listen to that album top to bottom without skipping anything because there’s always something new there.

DX: Well, Dr. Dre did serve as executive producer on that album as well. Do you think TPAB had an effect on Compton?

Focus…: I’m sure because it was very artistic. It wasn’t that standard rap album. It wasn’t Good Kid m.A.A.d. City but, was a formidable project by itself. I’m sure.