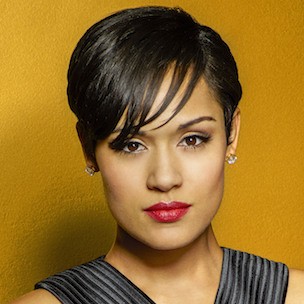 Television’s first great hour-long musical drama of 2015, Empire, has become a water cooler conversation initiator after making its debut earlier this month. Starring Terrence Howard and Taraji P. Henson, the FOX series has already been dubbed Hip Hop’s equivalent to ABC’s insanely popular country music-based Nashville. Focused on record label and media company Empire Enterprise, Howard stars as Lucious Lyon; former drug dealer turned rapper who has built the American dream through even more questionable means. This is where Henson’s portrayal of  ex-wife Cookie Lyon comes in. Recently released from prison after a seventeen years on drug charges, Cookie wants half of Empire Enterprise as cash gained through illicit dealings funded the company’s early beginnings. A huge bulk of the drama also comes through Lucious’ recent diagnosis of ALS and which of his three sons get control after his eventual death. This leads to an interesting power struggle between executive eldest son Andre, singer/songwriter middle child Jamal and hot-headed aspiring rapper and youngest sibling Hakeem.

Already a hit with both viewers and critics, Empire takes inspiration from news and rumors that have spread throughout Hip Hop for decades. Those with both underlying and surface level knowledge of the culture are bound to have a grand time naming those varying aspects. With that in mind, DX will be presenting a weekly series based around the show entitled Empire State of Mind which will connect plotlines to their real-life Hip Hop inspirations among other things.

This week, DX chats with Grace Gealey who makes her television debut as Empire Enterprise Head A&R and Lucious’ girlfriend Anika Calhoun. In this week’s Empire State of Mind, we discuss her thoughts on the cast, research for the role, and criticisms of Empire among others.

DX: Empire is pretty explosive considering the hype around it.

Grace Gealey: You enjoying the show?

DX: Most definitely, I love the show. Your role as Anika Calhoun has gotten much acclaim. Talk about her for a moment.

Grace Gealey: As you know, Anika is the Head of A&R for Empire Enterprises and Lucious Lyon’s girlfriend on the show. She’s hardcore, indomitable, independent and strong. This is a character who is powerful yet elegant. However, Anika is a hard worker and good at what she does. Overall, a force to be reckoned with.

DX: The work of an A&R plays within the music industry is very interesting. Essentially, they’re the liaison between the artist and label executives. Coming from an acting background, what did you learn about the position through the show?

Grace Gealey: Well you know there was a lot of research I had to do to set me up for the music world. And you’re right, it’s not only being a liaison but finding talent and cultivating them as well. That’s a big deal because talent is what brings in revenue for the record label. Though Empire Enterprise has other business ventures, music is the main thing. When I was learning about the different things the A&R I spoke with does and their responsibilities, it was more about how she lives in this environment and how she does her job being a women of color. So when I did my research, I spoke with the head A&R for a Hip Hop label who so happened to be a women. I talked to her about that and she told me that’s what led to a lot of the ways she did her work because it’s a very male dominated industry. A lot of the transactions she was apart of, she was judged for being a women. That kind-of added to her badassery.

DX: Who did you talk to specifically?

DX: Understandable. The series tackles some very controversial subjects within the music industry, culture at large and Hip Hop. How did you view Hip Hop before you took on the role?

Grace Gealey: I think I viewed it just like most people would as a consumer. I feel that Hip Hop speaks on a lot of issues and that’s starting to happen more and more. I believe in the 90s, Hip Hop spoke more about society and many important issues. Now-a-days, you have some that focuses on messages and some that aren’t saying anything at all. If you notice, the ones we consider the greats are the ones with something to say. As a consumer, I tried to filter out who I wanted to listen to based on what they were saying. Were they saying something that was relatable, something political or society? But, being on Empire, the way we view Hip Hop and music in general, it’s a character of its own. It’s a huge thing that infiltrates and inspires everything we do.  Everyone regards it highly.

DX: What attracted you to the role of Anika?

Grace Gealey: Isn’t it obvious? You have Lee Daniels’ attached, then Taraji and Terrence. Once I read the script featuring a woman of color in such a high position and power role was very interesting to me as well. Then the initial script didn’t have that many details but as things opened up, I really liked how they were tackling certain subjects. All those things would attract anyone.

DX: The show has gone on to do record numbers, enough to already get renewed for a second season. Congratulations on that by the way.

DX: Despite the success, some complain about its depiction of blacks on television in regards to particular character’s views on Obama and other aspects of the show. Do you have an opinion on the controversy?

Grace Gealey: Well, there’s going to be criticism regardless of what you do as far as I’m concerned. Those are just small elements of what we’re portraying. They’re not untrue. I think what the fear is that they don’t want specific stereotypes being perpetuated, but as you watch the show it’s not a stereotype that’s being perpetuated. You’re touching on certain elements that may be true about certain people’s experience. That’s the main thing. The show is about way more other things than those little things that people want to pick on. We talk about both physical and mental illnesses, homophobia, politics, child abuse, sibling rivalry and music  among others. There are so many things that we talk about that those other issues are a small facets. Even though they’re not stereotypes, there’s still some truth to that. People have either seen those people or known people with those characteristics. By no means are we trying to categorise anyone or anything. Because of the world we live in, you can see that it’s true.

DX: Where does the show go from last week’s episode?

Grace Gealey: The first three episodes were more of an exposition but this one is the meat of the story.There are a lot of things that are going to be revealed sooner than you thought in a way that you didn’t think would happen. Things are really getting to the nitty gritty and you’ll really see more of how Anika actually does her job.

DX: That episode featured an episode-stealing-scene between you and Taraji P Henson’s character Cookie. Is it difficult portraying the tension between you?

Grace Gealey: Oh Taraji is so much fun to work with. She’s really hilarious, cracks everybody up and a beast of an actress. During scenes with each other, we really do play off of one another knowing we’re heading toward a similar arc for the show. We do whatever we can to really play on the fact that Cookie and Anika have specific goals. I’ve enjoyed every moment working with her.

Grace Gealey: Oh, Terrence is as cool as the color blue. You probably learn more from him than an hour of history class. He’s intelligent and classy. Such a great actor who allows himself to be completely vulnerable.