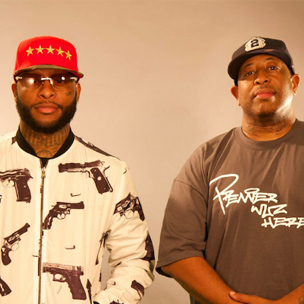 PRhyme is garnering praise as one of 2014’s best rap albums (it just won HipHopDX’s Album Of The Year) but fans of Royce Da 5’9” and DJ Premier are breathing sighs of relief — they’ve wanted a full LP from the duo since the mid-2000s, after getting timeless singles like “Boom” and “Hip Hop” from Royce’s first two albums. They’ve given fans glimpses in subsequent years with more gems and deeper collaboration, with Premier hosting Royce’s inaugural Bar Exam mixtape and executive producing his 2008 album Street Hop. PRhyme, their first album as a group — and Premier’s first group since Gang Starr — is the latest step in a 15-year friendship. In an interview with HipHopDX, Royce and Premier rank their pre-PRhyme collaborations and relive memories of Royce getting the beat for “Boom” instead of Capone-N-Noreaga, and how Proof’s death inspired a highlight from the Bar Exam mixtape series.

DJ Premier has given gems to just about all of Hip Hop’s elite: Jay Z, Nas, Biggie, and the list goes on. But one of the legendary producer’s go-to records when spinning for crowds is “Boom,” the timeless single from Royce Da 5’9’s Rock City debut.

“Every time I play it, it really gets the crowd going,” Premier said. “That, ‘Nas Is Like,’ and ‘Full Clip’ really get the place destroyed. So I definitely think “Boom” is that high up.”

Royce went to Premier’s studio while he was making the beat, which was originally being crafted for Capone-N-Noreaga. Royce asked if Noreaga had already heard the beat yet, and since he hadn’t, Royce asked if he could use it instead. Premier obliged, and added the clarinets to the instrumental. Royce asked him to add a “ticking” sound to match his lyrical concept.

“When Royce was telling me the subject matter, he said he wanted it to be like a bomb as far as his wordplay, his rhymes, and who he is represents a big explosion,” Premier said. “He told me to put a ‘tick’ in it. At the time there was no Serato, so you literally had to find sound effects. I kept a lot of sound effect records, and I took it directly off one of those.”

The result is an indisputable classic from both of their careers. As for C-N-N? Shortly after “Boom,” Premier produced “Invincible,” an instantly recognizable highlight from their album The Reunion. “The crowd gets crazy when I throw that on, too,” Premier says. “Everybody’s happy, so mission accomplished on all fronts.”

“Ding!” was inspired by the death of Proof. After Royce fell out with Em in the early 2000s, his friendship with Proof took a nosedive as well. Premier saw the severity of their beef when he was in Detroit for a Gang Starr show and received visits on his tour bus from Royce’s manager Kino and Proof, within minutes of each other, to explain why they wouldn’t be attending the show. “I’m a street-wise guy, so I respect the G code and I know anything could happen,” Premier said. “Both of them were looking at it out of respect for me, like, ‘We don’t want anything to happen while you’re in Detroit, because if it happens, it’s going to go down regardless.’”

The two rap luminaries later squashed their differences while sharing a wall between jail cells after the beef came to a head. Premier saw Proof in New York weeks before he was shot and killed. Royce and Premier had previously set aside studio time to work on a new single for Royce’s next record, but since the session was so soon after Proof’s death, Premier channeled his sadness through a pensive piano sample. Royce infused witty boxing metaphors in his verses, and paid homage to his slain friend. “Rest in peace to Proof / Probably rolling over in his grave, niggas poisoning his name, the misfortune of the fortune and the fame,” he rapped.

Premier was touched, and he thinks that Proof was too. “When Royce said that, I felt like Proof heard him,” he said. “…I felt like Royce was the spokesperson of Proof at the time. ‘Before everyone blows this out of proportion, let me be the first to show you the love that you deserve.”

After “Ding!” and “Hit Em” were completed, they were released as a 12-inch record to build anticipation for Street Hop, Royce’s next album executive produced by Premier. Nearly half the album was done when Royce went to court to see a judge for a DUI. He assumed a slap on the wrist before flying back to New York to record, but the judge had different plans: Royce was sentenced to a one-year prison bid that he had to start serving immediately.

“Kino got a message to me saying, ‘Yo, Royce said to just let him marinate through what he has to do, rock this time out, and we’ll rejoin when he comes home,’” Premier said. When Royce returned home on work release, he took on to the same beat he had planned to record to on the day he went to prison. He says “Shake This” was originally slated as a trash-talking song, but he ended up using it as a venting session to showcase his post-prison mentality, coming to terms with his alcoholism, and addressing naysayers’ doubts of a strong return.

“I tell people I’ve died a couple deaths in my career, in terms of an artist in Hip Hop,” he said. “(The prison sentence) was definitely one of my deaths right there.”

“Shake This” wouldn’t be released until later, but Royce took on the challenge with his revered Bar Exam mixtapes. The first entry of the series featured “Ding!” and “Hit Em,” and was hosted by DJ Premier.

The most successful year of Royce’s career was 2011, when he and longtime friend Eminem finally released an album as Bad Meets Evil, the duo they formed before their careers went their separate ways. The EP, Hell: The Sequel, debuted at number one on the US Billboard 200 chart, and its single “Lighters” was Royce’s biggest hit. Premier had the old Bad Meets Evil 12-inch of “Nuttin To Do” and “Scary Movies” in mind when Royce asked him for a beat to round out his introspective solo album that year, Success Is Certain.

“I know when it comes to Bad Meets Evil, when him and Marshall get together, some of the songs are approached differently,” Premier shared. “’Writer’s Block’ had already hit, so when it came to ‘Second Place,’ I knew I had to take it back to the raw, gutter, nasty Royce that people expect when we work.”

Royce says he loved this mellow offering from Street Hop so much that he rode around to it for a long time just listening to it before he began writing. He enlisted Phonte to sing the chorus, but Premier thought he would be lending rhymes to the song instead. Premier asked Phonte to add a verse, but Phonte was on the road and unable to record before Royce and Premier’s album deadline.

“We just ran into Phonte on the humble before an interview, saw he was there and we joked about that,” Premier said. “He said ‘hey, if you want to do whatever, count me in.’ So I’m sure there will be another Phonte sighting soon.”

This song from the early, pre-prison Street Hop sessions is one of Premier’s favorites because of the gustiness Royce showed in taking on its unconventional beat: a run of unrelenting piano stabs and minimal percussion. The song was used on Bar Exam.

“The way it sounds is very left-field. With Royce, I like the fact that I can go left-field, and he gets it. He won’t be like, ‘This is too far for me to write something to,’” Premier said. He added that the song reminded him of recording with Guru on Gang Starr albums.

“(Guru) would always give me concepts on every album, and we put them on a list. But we always had at least four to five songs where he would say, ‘a rhyming joint.’ With just dope rhymes that didn’t have anything to do with anything,” he said. “(‘Hit Em’) is one of those. Certain records are just for DJs to cut it up. No concept; just raw rhyming.”

Royce enlisted Bun B and Joell Ortiz for this Street Hop single, a concept track designed to showcase each artist taking listeners to their respective hoods in Detroit, Houston and Brooklyn. Premier had already worked with Bun B for the song and video for Termanology’s song “How We Rock,” and he knew it would be a great collaboration.

“A lot of people in the rap game or in the music business that are from the ghetto and who listen to street music, it’s hard for them to come back to the hood and get love without someone testing them,” Premier said. “All of us, we’re able to go back.”

Many fans revere the gloomy Death Is Certain as Royce’s best album, but he thinks the first single “Hip Hop” gave a shot of optimism to a record dedicated to exorcising demons from the industry woes of prior years. Armed with a sparse, easily-identifiable Premier gem, Royce pays tribute to Hip Hop music and culture.

“A straight Hip Hop joint, a classic in my catalog, definitely something I always have to perform at my shows,” Royce said. “We also shot a great video for this song, too. That’s another reason why it’s so solid in my book.”

Royce and Premier chose their least favorite track together as their first: “My Friend,” another song from Royce’s Rock City debut album. Premier heard Royce rhyme on Bad Meets Evil’s “Nuttin To Do”/Scary Movies” 12 inch, and connected with Royce through The Source founder Jonathan Shecter. He told Premier the concept —a lighthearted ode to his third leg— and Premier served a track that mirrored its goofiness while still using his signature scratches.

“I was just a little kid trying ideas, just getting my feet wet with writing concepts, right out of the open mic. Trying to pursue other avenues of my creativity and artistry,” Royce remembers. “The beat he made fit perfectly with what I was trying to do, but it’s definitely one of those trial and error joints.”