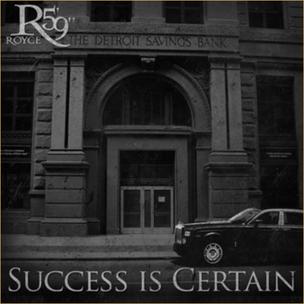 Riding the wave of critical acclaim which resulted from his collaborative work with Eminem as one half of Bad Meets Evil, Royce Da 5’9 is about to keep his audience talking with his new solo effort, Success Is Certain. As if Hell: The Sequel and a major label deal for Slaughterhouse weren’t enough to make 2011 a great year for the Detroit emcee, Success Is Certain is only continuing his impressive run.

Lyrically, Royce isn’t holding back, and he’s also holding his own. Guest features are minimal but important (including the appearances logic would lead one to expect, like Joe Budden and Eminem), leaving all attention on Mr. Nickel Nine. And he deserves it. For every bar he drops which has a reference to his phallus, there’s a punchline worthy of a rewind or some syllabic creation so hardbody that one would be convinced that he’s not a guy to fuck with. The Eminem and Futuristiks-produced “Legendary”

which serves as the opener to the album, features a menacing Royce over Travis Barker drums, threatening, “as far as killing I’m forever willing and ready / I will make my children’s peanut butter and jelly sandwich with a machete / You marry the streets then we will kill at your wedding / Tell every guest at your reception they gon’ get more than just hit with confetti.” He wastes no time and transitions from “Legendary” right into the lead single featuring Mr. Marshall Mathers, “Writer’s Block”

Standing up to strong lyricism is an equally strong production effort. Notables such as Nottz, Alchemist, Mr. Porter, and DJ Premier stop by to lend their hand to Royce’s musical backdrop, and the results are exactly as should be expected from the aforementioned names. As Royce brushes off the haters over some signature Alchemist sound on “I Ain’t Coming Down”

, he even takes a time to make a playful jab at himself as he jokingly rhymes, “You talking shit about me at your barbershop, you obviously politicking wrong, niggas need to stop PMS-ing / I hope your barbers give your ass the same hairline as me and DMX’s.”

Certain offerings are more memorable than others, with tracks like “My Own Planet”

(the closest thing to a club joint on the LP, not that one ever should have been on the album anyway, featuring Joe Budden) falling short in comparison to bangers such as “Merry Go Round”

where he once again brings weaponry into a reference to his kids with the simile, “Like leaving only guns to my kids when I’m killed / I got an iron will.” But even the very few tracks which aren’t five-star quality are still worth a listen or two, or maybe even more.

Success Is Certain should certainly be viewed as successful if Royce Da 5’9’s goal was to rap his ass off over knocking production from legends to create an album worthy of quite a few rewinds and replays. Royce’s latest will undoubtedly increase anticipation for fans waiting for a Slaughterhouse album, and it’s also going to keep Hip Hop fans wanting more of his solo work. It may have more in common with Rock City 2.0 than Death Is Certain, but it’s nonetheless a re-energized Royce, the same emcee that dominated Discmans a decade ago.