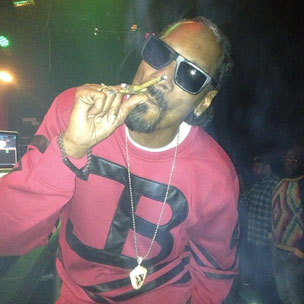 This week, Drake takes lint off his pants while courtside at a NBA playoff game, Big Sean becomes the first rapper to rap at the white house and Nicki Minaj and Amber Rose twerk it out. Check the rest of the week’s top Instagram posts below.

How much is Hip Hop interested in conspiracy theories related to Freemasons and the so-called Illuminati? Not counting the folks who regularly associate Jay Z with some secret society, you can add another few hundred to the list. Friday afternoon, Exile posted an Instagram picture of a briefcase he found which should provide plenty of entertainment for all those people looking for hidden messages on the backs of their dollar bills. “Um so ya I just found a briefcase filled with secrets of the Masons? Decoding the dollar bill? No joke,” Ex wrote. No joke indeed.

Drake once rhymed, “Tat my fuckin’ name on you so I know it’s real.” A RiFF RaFF fan took that sentiment to a whole new level after getting Jody Highroller’s name on her bicep and subsequently inking the signature on herself. For life. According to RiFF, she got the coveted John Hancock at his New York show, and she returned while he was performing in Philadelphia to show off her permanent dedication to the self-proclaimed neon icon.

Since Instagram is the new press release, Macklemore unofficially unveiled a new shoe. No filter needed. The Seattle, Washington native designed his own kicks by the specific name of “Pacific Northwest Salmon” Jordan Melo M10s. As expected, the shoes are toned with bright shades of salmon pink and includes grey stripes closer to the shoelaces holder. “Never dreamed I’d have an opportunity like this,” wrote Macklemore on Instagram. The proof is in the picture.

Earlier this week, Amber Rose and “twerk” were found in the same headline. Along with the subjects, the headlines demanded that you watch and experience the virtual rump shake. Questions and statements like, “Wiz is lucky,” “Why did Kanye leave?” and “We gotta learn how to do this” rang through the comments sections because of what was shown in under 15 seconds. Ps. If you’re wondering why she’s wearing a shirt and jewelry with the tags still attached, the twerking took during her cover shoot for Unleash’d Magazine.

Amber Rose isn’t the only voluptuous twerker on this Instagram list. Nicki Minaj also stirred up her own set of headlines when she posted this quick snippet of someone she claims to be her “friend” (but judging by the waist to booty ratio, Minaj’s friend sure looks a lot like her). Whoever shot it, didn’t take full advantage of the 15 seconds. Not only did fans want her to showcase her skills more, they also wanted to hear a longer version of the snippet played in the background.

Drake Liberates His Clothes From Lint At NBA Playoffs

“Lint rollers on deck.” Drake captured a screen shot for his memory bank, possibly to pass down to this children, of him making sure that his clothes were spotless. Nevermind that he was sitting courtside at a playoff game, so mundane. Fan-made OVO lint rollers are available now, in case you want to you know, be lint free.

At quick glance, the picture is plenty pause worthy. But the caption reads, “#tbt Skydiving in Dubai!!! #FollowtheRules.” Two things that I like, the first is that he jumped out of an airplane (it takes balls) and second, following rules are very important when you skydive. This picture could also add to the argument of when exactly Ja Rule became a man, post or pre-skydiving? Hopefully, he’ll let us know in his upcoming book, Unruly: The Highs and Lows of Becoming a Man.

Some of you may be too young to know what ADAT tracks are but that’s something Google can easily solve. Warren G might have aged himself a bit when he posted pictures of his audio taped recordings but that doesn’t matter when you were involved in Hip Hop history. He wrote on his caption, “Wow diggin in my tapes from 20 years ago and look what I found #teamgfunk #regulator I guess I am apart of history.”

Next to oxygen, smoke probably holds the largest percentage that fills Snoop’s lungs. April 20th, also known as 4/20, just passed with many making sure to smoke one in celebration, including Snoop D-O-double-G.

Big Sean At The White House

Looks like Big Sean borrowed a hat from Pharrell’s closet. Besides the overgrown hat, Big Sean was invited to The White House to perform with Ariana Grande at the Easter Egg Roll 2014. Thanks to Ariana, Big Sean became the first rapper to rap at the president’s crib.