Ja Rule has released the cover and title of his upcoming book, Unruly: The Highs and Lows of Becoming a Man.

“Unruly is two stories that offer one complete picture of a man and his world: the angry, fatherless rapper, Ja Rule who was ‘raised by the streets’ and Jeffrey Atkins, the insightful, reflective father and loyal husband who learned the hard way how to be a good man,” Amazon’s description of the book says. “Filled with never-before-revealed anecdotes and 16 pages of black-and-white photos,Unruly shows the determination that it takes to become a man in today’s society. Ja Rule considers the lack of role models for many young Black men today—a void that leads to bad choices and the wrong paths. Recalling his youth, he illuminates the seductive pull of the streets and the drug dealers who were his earliest role models.

“Jeffrey Atkins offers practical wisdom—reflection, growth and hope learned first-hand as an inmate, father, husband, and community role model,” the description continues. “He speaks fondly of men who inspiredUnruly—the inmates he met in prison whose misguided ideas of masculinity landed them behind bars—and Louis Farrakhan who mediated the televised encounter with Ja Rule’s adversary, 50 Cent. Unruly is a compelling, personal look at the duality and conflicts that arise in the African-American male psyche from a man who has enjoyed breathtaking fame and suffered heartbreaking misfortune.”

Earlier this year, Ja Rule spoke on rumors that he would be releasing a cookbook.

“I don’t know how this whole cookbook thing got started,” Ja Rule said at the time. “I was on a cooking show with [Geoffrey] and Guy and Bobby Flay, and all those guys were there. And were joking around, talking about what I ate in prison. And I was telling them, ‘Well, I ate such and such and this and that and the third’…Yeah, we definitely cooked in prison. You definitely get to cook in prison. You get a microwave and you get a toaster oven…The cookbook was a joke that me and Jeff and Guy were making. And then all over the media is, ‘Ja’s doing a cookbook.’ So, I guess I’m doing a cook—you know what’s even funnier, HarperCollins hit me yesterday and said ‘Ja, we would love to do your cookbook.’ ‘Cause I’m actually doing a book with them right now. I’m doing my memoirs with HarperCollins.”

The cover of the book is below. 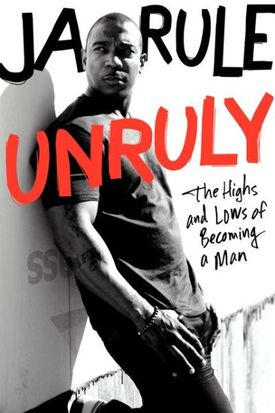