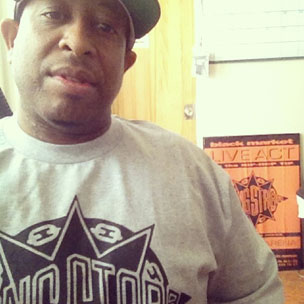 This week, Drake takes a light jab, filled with luxury, at Jay Z during the Raptors vs. Nets NBA playoff game, Common pays tribute to Nas’ “Illmatic” on its 20th year anniversary and Macklemore takes a selfie with Michael Jordan. Check the rest of the week’s top Instagram posts below.

“She asked to touch the brows #accessgranted,” wrote Drake in the caption of the moment captured with Kennedy Brown. Brown is a student at Carnegie Vanguard High in Houston, Texas and has a form of terminal brain cancer. Her friends started the social media campaign, #DrakeForKen, which Drake noticed and took action.

Jay Z and Beyonce don’t need an invite or need to be on the lineup of Coachella to attend the festival. Hip Hop’s royal couple crashed a few sets (Beyonce joined her sister Solange during her set and Jay Z joined Nas during his set) and took adorable festival pictures that were plastered all over Bey’s Instagram and Tumblr. No word if the Carters will be crashing weekend #2 but we’ll find out through pictures.

Q-Tip Pictured With Dr. Dre In The Studio

Q-Tip shared a picture of him and Dr Dre in the studio with several hashtags, one being #detox. Talk about getting the rumors going. Everyone who think Detox is a myth or simply not being released any time soon was a little thrown off by the caption. The full caption read, “#detox #lastzulu #hideyodrummachines #beatsnrhymes.” The caption was simple and not informative at all but could it be a hint that Detox is almost ready? Let the rumors flow.

Jay Z Announces “Made In America” Festival In Los Angeles

During the week, it was revealed that Jay Z and the mayor of Los Angeles will join in a press conference to announce something big. The “big” event that was announced was that Jay Z will be bringing his Made In America festival to Los Angeles during Labor Day Weekend. Don’t worry Philly, the show is still being held in your home but you’ll be sharing the spotlight with Los Angeles. For more information on both shows and where to purchase tickets, click here.

On Friday, Macklemore and Ryan Lewis performed at the Jordan Brand Classic in the Barclays Center, where Macklemore took a quick selfie with basketball greatness Michael Jordan. The picture was captioned, “The greatest ever… #jordan #selfiedondada.” Selfie envy material.

As you may or may not know, Nas’ debut album, Illmatic, turns 20 today. And as a tribute to his peer’s contribution to Hip Hop, Common thanked Nas via Instagram for his iconic body of work. “20yr celebration of my favorite hip hop albumn ever made. ILLMATIC From me and the world, THANK U @NAS”

Killer Mike Joined OutKast On The Coachella Stage This Time

After rearranging the set and not bringing on special guests, OutKast finally had the chance to close out their set with “The Whole World” as planned. That also means that Killer Mike was able to join the duo for the track. Mission accomplished. Last week, he was ushered off the stage after trying to start the song with ad-libs because the set had to be cut due to time restrictions. A happy Mike shared this picture along with the caption, “My nigga…….My nigga (with all the love of a blood brother)! You deserve every blessing the world has in store for U. Salutes u @therealbigboi! 1/2 of the mighty mighty #Outkast #GodIsGood #FriendShipEndures #MyOGnME #TheWholeWorld #CoachellaFollow.”

April 19th marks the day of the passing of Guru, one half of Gang Starr. DJ Premiere has been honoring his fallen friend through social media and asked his followers to do the same. “ALL DAY REPPIN FOR THE LEGACY ESPECIALLY TODAY !!! PLAY AT LEAST 1 GANG STARR RECORD TODAY IF IT’S REALLY REAL….” So listen to Premier and click here to play a track.

OutKast Reunites At Coachella, Round Two

Big Boi and Andre 3000 may have kicked off their reunion tour last weekend but the duo really lit up the stage, the second go around at Coachella. With the caption, “#outkast20 #coachella #YeahHoe,” Big Boi’s Instagram captured OutKast on stage during their dynamic set.