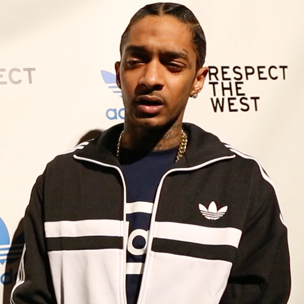 When we look back on 2013, Nipsey Hussle’s “Proud 2 Pay”—and the “Crenshaw” project it spawned—will likely be one of the most memorable stories. After cutting ties with Epic Records and handling the kind of non-musical obstacles that come from being entrenched in L.A.’s Rollin’ 60’s Crips, Nipsey raised eyebrows when he announced the option of paying $100 for physical copies of his “Crenshaw” mixtape. The project was also available online, and those who purchased the $100 version also received tickets to an upcoming concert. It sounds cliché to say they bought into a movement (because every rapper has a movement, right?), but this was more than forking over money for an advertising ploy.

Fans lined up around the city block to buy “Crenshaw” from the retail store Nipsey Hussle owns. “Neighborhood Nip” credited the strategy in part to an anecdote from Jonah Berger’s New York Times bestseller, Contagious. Jay Z showed his support by purchasing 100 copies. And just like that, skeptics and outsiders who had never even heard “Hussle’s In The House” or previously bothered to check for Nipsey were jockeying for room on the bandwagon.

At a time when rappers with 360 deals and puny royalty splits are proclaiming themselves bosses, honesty is seemingly abnormal. Hearing Nipsey take established media outlets to task and question their role as gatekeepers or talk about a “paradigm shift” aren’t traditional actions of some stereotypical gangsta rapper hoping for a look from a mainstream media outlet. This is Marketing 101 from someone who just so happens to have tattoos on his face and cornrows. HipHopDX checked in with Nipsey Hussle for some brief insights on his successful year.

DX: Back in 2006 you floored Davey D by telling him you wanted to get into real estate and find ways to invest in other assets besides the stereotypical rapper items. How did that work out?

Nipsey Hussle: Not myself personally, but my brother invested in some real estate. That’s something that we’re still planning on doing. We ended up opening up businesses and building brands, but we haven’t fully ventured into the real estate investment like we want to yet. But it’s something we always thought made sense—especially getting Rap money. Entertainment money comes in lumps, but it fluctuates. Some seasons it rolls, and other seasons it can get kind of quiet, and you’ll have to create other sources of income. We still up for it though.

DX: There’s a relentless sense of team empowerment in every track on “Crenshaw.” What books are you reading, because there’s a real sense of altruism in the music?

Nipsey Hussle: That’s what’s up. Thank you. I read a lot, bro. I read a ton of books. Recently, I was taught about this book called Contagious, by a dude named Jonah Berger, and that’s the one that kind of inspired the $100 mixtape concept. But outside of that, I recently read The 22 Immutable Laws of Marketing, and that was heavy. I read a lot though, man. I’m like a book addict at times.

DX: I went to the “Proud 2 Pay” event, and I didn’t get the album, but I bought a sweatshirt. How do you think your fans took your Twitter statement that the “Crenshaw” material was all throwaway tracks?

Nipsey Hussle: I think the word “throwaway” kind of diminished the value of the record. That might not have been the best word for it, but I just meant records that didn’t make the album cut. So it was an overspill of music, and I think the ones that I gave away on “Crenshaw” were specifically tailor made for the streets. When it came to crafting an album, I was just thinking about great records in general…just great songs. That was the standard I was trying to aim for with every record on the album. So as I went back and listened, I was like, “These records is dope, and they got moments. It’s real. It’s all true stories, and it’s all important.” But everything I considered to be a great song, I put that on The Victory Lap playlist.

DX: “Crenshaw & Slauson” is a three-song tour de force. Did you have that structure in mind, and if so, how did it come together?

Nipsey Hussle: That’s DJ Dahi. When I grew up on Rap music, putting extra music at the end of the album was one of the things I thought was dope. I just had a ton of records. I spent the majority of 2012 and 2013 recording, so I had a gang of records. I was like, “I got a ton of stuff,” but it all connected thematically in terms of what the message was. So I was like, “I’m gonna do some shit that I grew up loving. I’ll throw some bonus tracks on there.” I did it on The Marathon, so it was really about me doing what I grew up liking. I used to love when I would listen to an album, and I’d be working out or something and forget to stop it, and then I’d hear a song for the first time months after I had the album. I was just trying to recreate that.

DX: You did a series of solitary interviews from 2007 up to now with a blue microphone. Is that your creative process—just spitting your verses alone—or how has it evolved?

Nipsey Hussle: Sometimes it’s like that. I got a team that moves with me damn near everywhere I go now, but sometimes it’s like that. Sometimes I’ll be out of town, and I’ll have the setup. Somebody will e-mail me something, or I’ll go through a record, hear something, and I’ll want to get it off. You can get an idea down by yourself. You’re probably gonna have somebody touch it and bring it back to life after the fact. But yeah, sometimes I’ll do that.

DX: I also thought it was interesting that “H-Town” didn’t feature Z-Ro and Slim Thug. You had them on a totally different song…

Nipsey Hussle: Yeah, that was intentional. I went to Houston, and I got to see Z-Ro live. I got to see artists like J Dawg and obviously [Slim] Thug. I thought, “Damn, this shit is dope. I want to do something with these artists,” because I became a fan after hearing their mixtapes and seeing their shows. So I reached out to Z-Ro, and we knocked some shit out when he was out here. I think throwing them on the “H-Town” record might have been too cliché, but they came through for me.

DX: True. It’s been an incredible year for Hip Hop—especially here on the West Coast. What will you remember most about 2013?

Nipsey Hussle: I think it was just a good year for Rap like you said. A lot of good projects dropped—everybody came out this year and put their best foot forward. Rap music is really important right now. It’s always been important, but real Rap is important. The West is poppin’, and it was a lot of things that were exciting. A lot of big moves were made, and rules got broken. Macklemore and them came through, Eminem dropped…

Nipsey Hussle: I think there’s a ton of rules to be broken. I think the people who break the rules are gonna win the biggest. It’s a paradigm shift happening, and I think the game is changing. The people who are up on it and taking advantage of it are going to win and win big.