Nipsey Hussle announced today (October 4) that he plans to sell physical copies of his Crenshaw mixtape for $100 each. Billed as “The World’s First $100 Album” and encouraging fans to “Be A Part Of History,” Nipsey Hussle says he only pressed 1,000 CDs, which will be available at midnight October 8 at his Los Angeles pop-up shop on Fairfax Avenue.

In a statement released to RapRadar, Nipsey Hussle says he chose the three-figure price tag because he’s “tailor-making music” for his core fans.

“It’s not about stepping outside of what I’m known for in hopes of new discovery,” Hussle says. “What that means is less fans are better served. (Kinda like the effect of less kids in a class room leading to better education.)

“I’m more or less focused on fully serving the ones that have connected already,” he continues. “That being said, it’s a value over volume thing…If I’m goin’ to offer a product made with no compromise or concession to the platforms (radio, A&R, opinion, label bias), then the way we sell has to change. Hence PROUD2PAY.”

Nipsey Hussle also explains that the $100 price isn’t connected to the cost of making the CDs. Rather, “it’s the price of Revolution,” he says.

“Crenshaw” is hosted by DJ Drama and is also scheduled to be available for download October 8.

“I think if you stay down, you’re gonna come up on everything,” he said to DJ Skee. “I think everybody just stayed down, stayed doing what they was doing. They didn’t jump on trends. They stuck with what’s more true to them.”

Nipsey Hussle’s full statement regarding Crenshaw and the flyer for the mixtape’s release event are as follows, as per RapRadar.

It’s 2013 whether we except it or not, buying music is a choice not a requisite. When I think of the psychology behind what makes me purchase an artists album, it’s always a form of reciprocation. Almost like a token of appreciation after I experience the product.

The reason I chose to charge $100 dollars each copy and only start w 1000 units is because I’m tailor making my music for those who are listening…it’s not about stepping outside of what I’m known for in hopes of new discovery. What that means less is fans that are better served.  (Kinda like the effect of less kids in a class room leading to a better education)

I’m more or less focused on fully serving the ones that have connected all ready. That being said its a value over volume thing…if I’m goin to offer a product made with no compromise or concession to the platforms (radio, A&R opinion, label bias) ect…ect..then the way we sale it has to change.

As an artist my goal is to inspire…entertain…motivated…and most importantly INOVATE. And as lovers of art we should base our purchase on the artists ability to do so. That being said, if my presence in the game has had any of those effects on you $100 is your form of saying don’t change.

It ISN’T the price of the plastic case and polyurethane disc…it’s the price of Revolution! The price of Rebellion against an industry that has tricked us all into making products that have no soul for fear of not being heard if we don’t.

I have over 400k followers on twitter 140k on Instagram and 400k on Facebook but what good are they if they don’t mobilize around my releases? if only 1000 of those people are engaged to the point of brand loyalty then that’s who I’m focused on.

That being said: I fux w who fux w me. I have no plans to change up or go left on my people for hopes of a lager audience. And I have a feeling that this 1st 100 will be the evangelist to my cause.

Like Frank Lucas said nobody owns me. We might have to go into the jungle for it to work but once we get it… It’s blue magic. 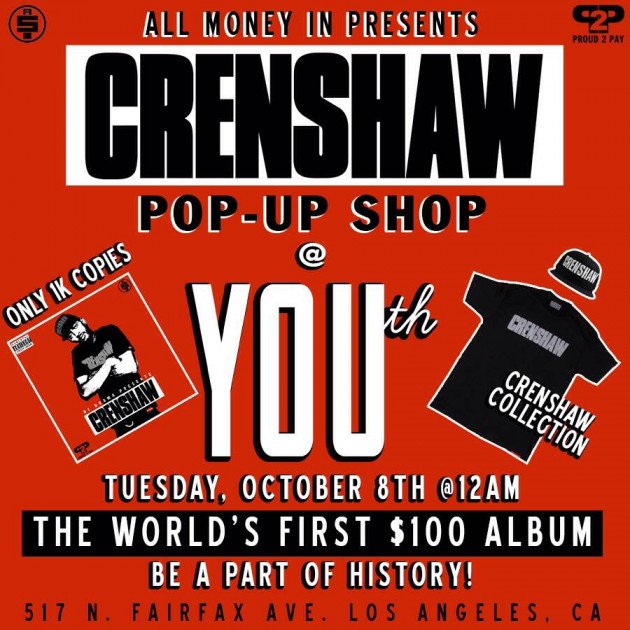