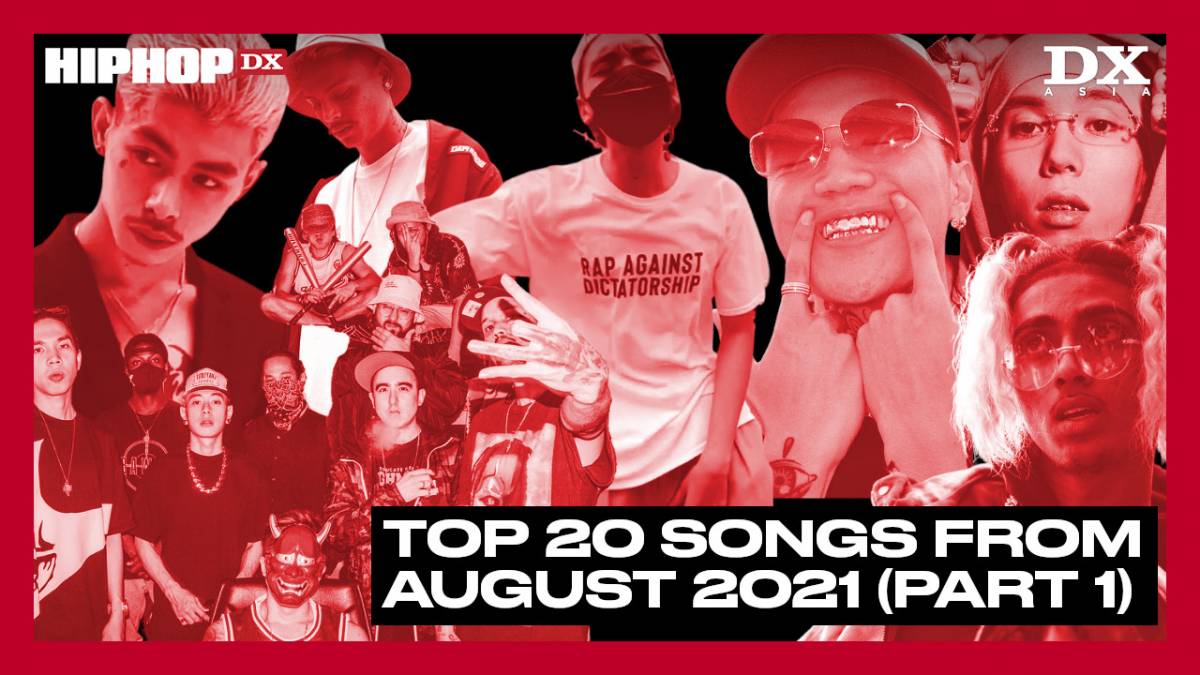 After nearly half a year of reporting on and covering hip hop in Asia and the Asian diaspora, we at HipHopDX Asia have always recognized and valued the importance of artist discovery as much as representation. It’s fundamental to our ethos that we embody the richness and diversity of our cultures, champion and amplify creative expression, and open our platform to the unseen and the unheard—the spirit to which hip hop was founded across the world nearly half a century ago.

For this feature, we recognize 20 songs from the past month that stood out from the rest, cutting across language barriers and differences in perspectives. Listed according to the release date, here are HipHopDX Asia’s top songs from August 2021.

Calling yourself “Nasty” is almost courting one of few responses: either no one bothers, or you’ve preemptively set yourself as a pariah. Nasty decided early on that above everything else; he’s determined to make his mark by and for himself. The crux of Unapologetic II, the latest in a series of promised mixtapes this year, is not exactly to acquit himself of his past mistakes but to be defiant in his identity. On the mid-album single, “Not Nice,” featuring longtime collaborator V$X, the Nepali hip hop pioneer makes it clear that you can fault him for anything and everything, but he’s never one to lack ambition or vision.

Indonesian hip hop crew MukaRakat bust out a vibrant hip hop cut with an MPC, a turntable, electronic keyboard, and fresh air. “BEATS & NATURE Vol. 2” is a loosely structured song marshaled by vibe more than anything else. In a weary pandemic era, sometimes, that’s all we need.

Thai hip hop collective Rap Against Dictatorship demands answers in “งบประมาณ” (Budget)—and holds the political establishment’s feet to the fire. Splicing clips of Thai royalty and the military junta against long vaccination lines, overflowing patients at hospitals, and scenes at protests, RAD is hip hop at its radical, urgent form. “Your budget comes from our money,” they remind the officials. Despite ongoing threats of censorship, Rap Against Dictatorship never loses sight of the cause. In the video description for the music video, they wrote, “แด่ทุกความสูญเสียที่เกิดขึ้นจากการบริหารงานที่ผิดพลาดของรัฐบาล” (To all the losses caused by the mismanagement of the government). This is a group that lives up to its name, talking its talk and walking its walk.

Fashion has always been central to hip hop culture, and the Japanese have taken American hip hop’s influence and ran with it (one doesn’t have to look farther than the world-renowned Nigo-founded BAPE as the most obvious reference). LEX and JP The Wavy, two of the country’s biggest young rap stars, give us a basic oral history of the cross-culture fusion of Japanese hip hop fashion (namedropping the Pharrell connection, of course) in their collaborative single, “なんでも言っちゃって / Perfume.” The track is a lite pop-hip hop sampler that best represents the cool and carefree side of modern Japanese rap.

The maiden offering from “Members Only” is a namesake track that pronounces “no bullshit” and tells all the other rappers “to take a nap.” Backed by a classic record-sampling beat work from xrface, the analog feel of “Members Only” is the best part of the single. That evocative outro with piano and string flourishes is some of the best work I’ve heard this year so far and arguably a strong contender for song of the year so far, if not top 10.

TXMIYAMA – “Keys To The City”

The concept of assimilation has been a hotly debated topic in Western countries for as long as there has been immigration. But the subject has mainly been lost, if not ignored, in Asian countries, where tribalism runs deep.

Grappling with his identity is central to the music of Hong Kong-raised Japanese rapper TXMIYAMA, whose work is perpetually inhabited by faces that show Hong Kong’s multiracial community, as well as the precariousness of his place in a society seemingly hostile to the plight of the majority.

“Keys To The City” is TXMIYAMA’s oath of love and honor to Hong Kong, his home, about “paying homage,” he tells HipHopDX Asia in a past interview, even if it means turning away from his shot at fame.

Hindi rapper-producer MC STΔN is one of the rappers that put a voice and a face to the South Asian representation that’s ostensibly missing in mainstream media. MC STΔN’s diaristic storytelling from being a “hood baby” resonated with local fans, weaving the influence of the exuberant music of qawwali, a form of Sufi Islamic devotional singing with the sonic and thematic sensibilities of the American dirty south—the latter palpable in “I’M DONE.” And just like Atlanta heroes Outkast in the ’95 Source Awards, MC STΔN emerges victorious.

Sambal Snake’s reimagining of Singapore’s annual National Day Anthem tours around the city-state while treading a tightrope—and succeeds at it. With a companion video that escapes the boredom of a patronizing government-commissioned cultural project, “Singapura” is a snarky, thankfully not-a-tired version attempt at innocent fun, and more so, pride—sans the ultra-nationalism.

VannDa – “Catch Me If You Can”

VannDa’s story is not entirely unique: a young aspiring musician who learned how to make music even without his own equipment, fending for himself and his family by selling coconut shavings, and still sometimes not earning enough to catch a fare home. But now adding a critical context: living in Cambodia, a country that suffered a literal genocide that wiped out generations of artists and nearly its culture, to see rapper-producer VannDa at the top leading the charge only within a span of few years is truly remarkable and inspiring.

VannDa’s “Catch Me If You Can” is an alternative hip hop track that harkens back to his early-career rock repertoire, his vocal work distinctly more hypnotic than his previous hit single, “Time To Rise.” He told HipHopDX Asia that the visual style is inspired by its namesake Leonardo DiCaprio film. At the same time, the musical approach is more “fun”—and for fans whose taste have been shaped by 808s-era Kanye West (like Kid Cudi, the closest sonic reference point to “Catch Me”),  the somber quality foundationally tethered to this sound will always be affecting and this phase in the Cambodian artist’s career makes it more truly fascinating to see unfold.

One of the most enduring narratives in hip hop is competition, the art of the fight. Filipino hip hop collective Bawal Clan and rap group Owfuck’s “Pating Sa Kadiliman” (Shark In The Dark)—and to an extent, their joint album, Ligtas (Safe)—is more than just implicating aggressors, often feeling like a diatribe of self-admonishment. For in Ligtas, the most forceful enemy is oneself, and survival is power. And if you listen closely within the context of the Philippines’ human death toll in the last six years alone, you’ll see that “Pating Sa Kadiliman” is an act of self-preservation.