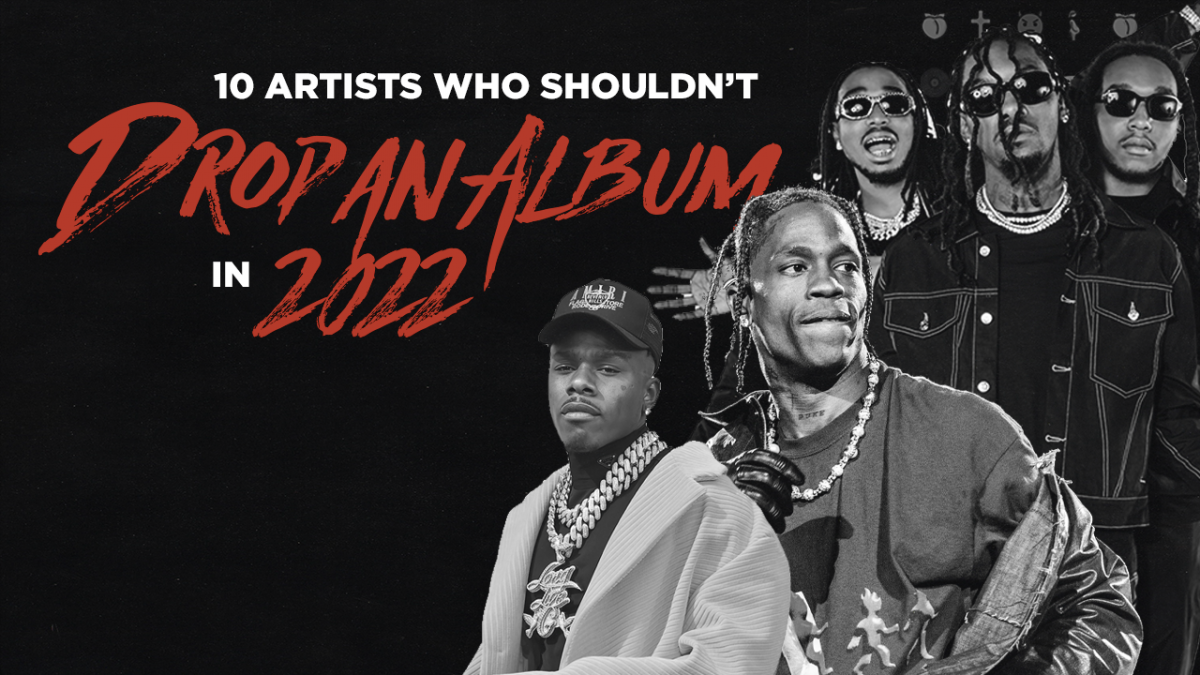 Rap fans will fight you about which rappers you like, but they’ll cut your head off for who you don’t. Every rapper has their cult and placing them on a list like this is akin to jostling a wasp nest (i.e. putting Joyner Lucas on last year’s list). We’ve been stung enough, and further, agree that hate media is unproductive in the modern era.

So, this list is different from years past. The trash has been taken out (you won’t find Lil Pump, Smokepurpp, 6ix9ine or any other low hanging punching bags), and the focus is on who would benefit from an extended break. Generally, what you’ll find on this list is rappers in hot water with the public, rappers coming off of disappointing releases, rappers who appear to have fizzled or burnt out and rappers that have been stuck in the same creative rut for years.

Roddy Ricch’s sophomore album, LIVE LIFE FAST, is among the most disappointing releases of the year. Roddy veered from the path of new age excellence that he put himself on with 2019’s Please Excuse Me For Being Antisocial, and the entire hip hop world wants to see him right the ship for his next offering. If he takes his time, focuses on what sets him apart from the millions who occupy the same space and drops a project that invigorates, it’ll be a minor misstep in a promising career. But a rushed apology album might just be the critical second step down the wrong path. With Roddy reportedly releasing Feed Tha Streets 3 this year, it’ll be interesting to see if he drops in his usual December slot, or puts the album out beforehand to get the public back on his side.

While everyone would love to see the Migos return to form and release another groundbreaking trap album, the prospect remains doubtful. It seems the Atlanta trio went artistically bankrupt following the original Culture album. Culture III was bad. Culture II was a bloated slog. Hopefully 2022 will be a time of renaissance for Quavo, Takeoff and Offset. Because if fans get another Culture II or III, the window may just close.

DaBaby’s public image was declining even before his bizarre Rolling Loud rant. But with those offensive remarks, he shot his career in the face. His cancellation was something to marvel at. Festivals kicked him to the curb and collaborators disavowed him. If he dropped a phenomenal project, he might have rallied some fans back to his side. But with the lackluster Back On My Baby Jesus Sh!t AGAIN, he reminded listeners that whatever was fun or novel about him has long since worn off. DaBaby should seriously consider accepting his dishonorable discharge. But if he insists on staying active, he’ll need the whole of next year to make something fans want to hear.

On a serious note, Travis Scott’s Astroworld festival (which resulted in the death of fans in the double digits) grievously marred his brand. Annheuser-Busch discontinued his Cacti Seltzer and festivals have largely dropped him from their lineups. Going into the new year, Travis should continue to focus on spearheading concert safety reform, not promoting the long awaited Utopia.

This is not a dig on Pop Smoke. He was a raging fire snuffed out long before his time and our world is forever darker because of it. But Pop Smoke’s estate seems determined to wring out anything from the late artist that was recorded during his life. We wouldn’t be surprised if some of the snippets are just Pop Smoke singing in the shower. While the team got it right with Shoot For The Stars, Aim For The Moon, the second posthumous album, Faith, was hackneyed, stitched together and quite unnecessary. They also re-released “Dior” seven times. It has been said that Pop’s vault has been exhausted, but if that isn’t true and more Pop Smoke is on the way, this is a plea to the organizers: do it right, or (preferably) don’t do it at all.

If you want to be a successful rapper, just do what Rich The Kid did: Get lucky once and make talented friends. The “Plug Walk” rapper has since scored a Kendrick feature and dropped collab tapes with generational talents NBA Youngboy and Lil Wayne, despite being severely outmatched. It’s been almost four years and the highs of his Rich Forever collab tapes haven’t come close to being matched. His hit song “Plug Walk” stands the test of time, but since then he’s released seven (yes seven) albums and none have caught on. He’ll have to dig deep and innovate to make a project that can stand on its own.

It is long past time the hip hop world acknowledged that Big Sean produces more corn than the state of Iowa. Through misappropriated swagger, good looks and industry connections, Sean has carved out a lucrative career and caused possibly billions of eyerolls. But his fanbase is willing to go to war for him. He’s one artist that constantly gets referenced as underrated or someone who deserves his flowers. And, at the least, his newer material has some gems despite being nothing more than solid. So, if new Big Sean music is inevitable, at least tinker with the formula.

DJ Khaled hasn’t been entertaining since before TikTok existed. The Snapchat memes of Apple Ciroc are long gone. The character has worn off and what’s left is a commercial of a collaborator, an advertiser who somehow can bring together the top artists in the world without much effort. He also hasn’t produced good music since the early 2010s. His 2021 release, Khaled Khaled, was a mixed bag that predictably relied on star power to elevate it, but was ultimately less than the sum of its parts. Despite a few good songs that have withstood the test of time, Khaled has become a wealthy punchline with a tendency to go for money rather than producing quality songs. We all know Khaled wouldn’t go silently into the night, but a multi-decade career is simply egregious for someone who’s mostly famous for shouting.

In a career divided between relatively high peaks and chasmic lows, Logic closed his loop in an unexpectedly satisfying way with 2020’s No Pressure. It was a return to form, a love letter to his day one fans and a generally good exit point. Fans and haters rejoiced when he announced his retirement from rap shortly thereafter. But this year, along with a superhero themed mixtape released under pseudonym Doc D, he delivered the utterly faceless Bobby Tarantino III.

So, either his retirement was purely a sham publicity stunt or Logic just could not be content with himself if he didn’t go out with a bang. Instead, he’s crossing the finish line in a sad, whimpering crawl. If he stops now the last thing most people will remember is No Pressure. But if he drops another mockish album that will be his legacy. Good money holds that he doesn’t have anything better than No Pressure left in the vault (unless maybe that rumored Madlib collaboration album exists), so he should strongly consider at least taking some time off.

In 2021, Soulja Boy was an absolute plague on social media. Everywhere you went, Soulja was whining for credit, erroneously claiming he was the first rapper to do just about anything and jumping through every hoop imaginable to try to revive his career. He dropped three albums in 2021, all of which bombed so badly you almost feel bad for him. But then you see him on Instagram and remember why you can’t listen to “Kiss Me Through The Phone” anymore without feeling pure rage. He’s already made it clear he isn’t retiring from music and wants to drop another album soon. But at this point, a true pioneer of rap music, internet distribution and even a precursor to the TikTok era of music, may be more known for his bootleg game consoles than his music.

No, we haven’t spent damn near five years awaiting the return of the king of Compton Mr. Kendrick Lamar. Also, we don’t desperately want to hear what he’s been working on for all that time. And we definitely haven’t been listening to his verse on “Family Ties” on repeat just to scratch the itch that grows more maddening each year without an album. Where did you hear all of this? (Please give us more music Kendrick, you’re killing us). JUST IN CASE YOU DIDN’T READ THE PARAGRAPH THIS WAS A JOKE, WE WANT A KENDRICK ALBUM.

Be sure to check out some of our other Year End Award Categories, articles and our previous year’s winners below: