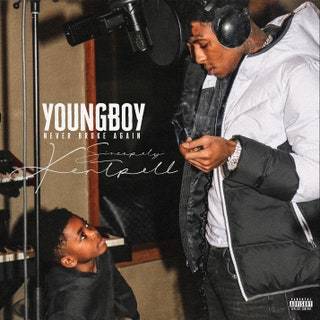 To NBA YoungBoy, betrayal is the world’s gravest sin. The perennial rap star has been an undeniable influence on popular rap music over the last five years. His melodic trap and mournful croons can be heard in every corner of rap — from the booming ballads of Rod Wave and Toosii to the West Coast’s Roddy Ricch and Blxst. The spirit of YoungBoy peeks behind so much of popular rap music, but after four Billboard No. 1 albums, four RIAA-certified platinum albums, 16 million monthly Spotify listeners and nearly nine billion combined YouTube views, the genre has still not embraced him.

The release of Sincerely, Kentrell, the Baton Rouge native’s latest project arrived in less than ideal circumstances. YoungBoy is currently incarcerated and awaiting trial for allegedly possessing a firearm as a felon. But there are several rap stars who survived and thrived from behind bars. New York’s Max B has kept his career alive while serving time, as did Gucci Mane and Mac Dre. Memphis rapper Pooh Shiesty is facing similar battles for recent bouts with the law, and it was only one year ago when Drakeo The Ruler released Thank You for Using GTL while imprisoned. But the most important example is of course 2Pac’s Me Against The World.

And like Pac’s masterpiece (at least thematically), Sincerely, Kentrell is a portrait of an artist struggling with his fame, steadily slipping into progressively darker realms, grasping desperately for support but finding nothing there.

Like much of YoungBoy’s albums Sincerely, Kentrell is less a polished product and more the stream-of-consciousness thoughts of YoungBoy at the moment. As YoungBoy raps through a thick Louisiana drawl, the battle between betrayal and loyalty takes center stage. His friends can’t be trusted nor can his lovers or even family. Tragically, the walls weren’t erected around him; he built the box with his own two hands, slipping further into isolation.

The love and care sits within his reach, but he strays farther through escapism and shutting himself away. “Every time I catch my feelings, lock ‘em in a bottle/And you probably find my heart somewhere lost in Nevada,” he confesses in a moment of piercing honesty on “Nevada.” Even when support reaches its fingers toward him, YoungBoy shrugs it away. “Fly shit, birthstone, say she love me/Ugly boy, toxic punk, they don’t love me, yeah/Foreign drugs, hallucinations all I see,” he raps on “Toxic Punk,” unable to see the outstretched arms.

Sincerely, Kentrell faces some of the same issues present on his 2020 album Top. The honest and unvarnished approach of a free-form album comprised largely of freestyles also leads to repetition and a complete lack of order. The album’s best, most raw tracks such as the off-kilter “Smoke Strong” and intoxicating “I Can’t It Back” are lost among clear throwaways such as “Kickstand,” “All I Need” and “Break Or Make Me.”

The album holds far more moments of delicate intimacy than Top, but it’s also messier and clouded. YoungBoy’s never launched a proper rollout and marketing campaign, and he’s more concerned with releasing the music than how it’s unveiled and ordered. This works to his benefit at times: he’s cultivated a devoted fanbase through his spontaneity. But Sincerely, Kentrell is deeply missing focus. The touch from A&Rs and label executives can certainly suck the soul from projects this vulnerable, but those adjustments can also take the music to new heights and grander audiences.

Despite being one of the past decade’s perennial superstars, the industry side of rap keeps a healthy distance between itself and YoungBoy. He received practically no support from YouTube, Spotify and other DSPs, few posts from labelmates and absurdly minimal radio streams for an artist with millions upon millions of devoted fans.

Corporate hesitancy to engage with YoungBoy isn’t too surprising given the industry’s uncomfortable, often toxic relationship with what’s considered to be true authenticity in music. Violence, addiction and other traumas are exploited in A/B tests, glorified in order to sell product until the moment it becomes unviable or bad for their brand’s image, at which point the artist is thrown by the wayside and demonized. YoungBoy doesn’t fit into industry expectations of a rapper. He possesses that raw edge but refuses to be constrained.

Sincerely, Kentrell is YoungBoy at his most vulnerable and vengeful, worn down by his own paranoia, some justified and some fabricated. And despite it being a typical YoungBoy album, it’s also his rawest and most revealing project to date. As YoungBoy attempts to escape from the dungeon of smoke and mirrors he helped create, one thing becomes clear: solace is in reach and he’s his only obstacle.

Rappers trynna figure out how YoungBoy album went top #1 without promotions and he in jail???: pic.twitter.com/14fDzNKjbj

Youngboy did his shit on this album like it’s probably his best album yet !! ?