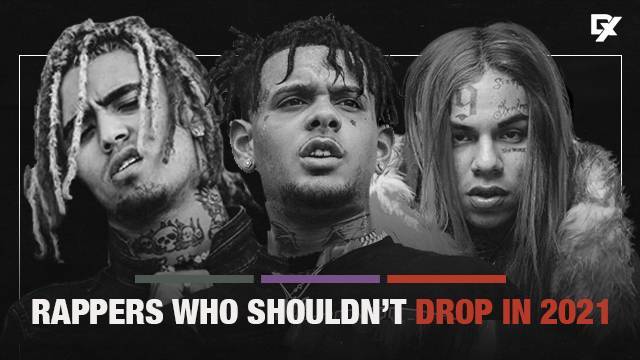 Over the past year, Hip Hop fans have been introduced to scores of new artists primed to take over the genre. Emerging perspectives and voices have broken through rap’s hierarchy, shaking up an already tumultuous industry. But with the rise of the new comes the fall of the old. Whether their music oversaturated the ears of listeners with mind-numbing repetition, they released a slew of mediocre tunes or perhaps poor choices in their personal lives tarnished their reputations, a handful of rappers in 2020 have lost our attention.

On this list, readers will find veteran rappers in a steady career decline, youngsters who burned too brightly and too quickly and some of rap’s most notorious agitators and trolls. Some of them, we never want to hear again. Others just require some amicable space.

There’s no shortage of artist with such a deep sea of talent in the Hip Hop universe, so we’re not pressed waiting for these fallen-off rappers to get their shit together. Sometimes a break can be healthy and when it comes to these 10 artists, a break is needed.

The rainbow-haired, wannabe gangster-turned-snitch, controversial rapper with a mind-boggling ability to crank out millions of streams and views has served as rap’s most hated for nearly two years now. But after his early release from jail last summer, 6ix9ine is seemingly on a personal mission to prove he’s worse than previously thought. To absolutely no one’s surprise, the “FEFE” rapper doubled down on his snitch persona and branded himself as an unlovable troll. But his greatest sin in 2020 was the album’s worth of terrible music he forced upon the world. Luckily, after TattleTales commercial flop, he’s stayed relatively invisible unless triggered by any rapper who happened to be born in Chicago. Let’s keep it that way.

Tory Lanez is good at ruining his own career. After allegedly shooting Megan Thee Stallion for apparently no reason, he’s embraced the hatred, refused to take responsibility for his alleged actions. In what might be the most toxic move of the entire year, he dropped the DAYSTAR album, which attempted to paint himself as the victim. But let’s get this straight — not only was releasing the project a horrible decision, it’s also terrible music. But really, we shouldn’t be too mean to the Canadian rapper — who’s currently facing felony assault charges — he’s still on the floor like Nate Robinson, recovering from Megan’s scorching diss track, “Shot’s Fired” and whining about songs getting taken off Spotify.

Even the hardiest Kanye West fans are growing tired of his agitating antics and ignorant comments. Many believed running for president was a selfish, poorly-masked attempt to support Donald Trump, who Kanye has so vigorously and controversially supported. Along with his short-lived political tenure, Ye has several active lawsuits for his failed Christmas Opera, as well as reports of mistreating his crew. No longer can his music can redeem his lurid behavior — JESUS IS KING and all its subsequent offerings are boring stabs at gospel music with very little replay value. We miss the old Kanye, the Kanye who attempted to unify, not divide. But that guy seems long gone.

Can you name one good French Montana song in recent years without a feature? Neither can we. Lately, the veteran Moroccan-American rapper has taken on a DJ Khaled role — except Khaled was smart enough to stop rapping on his tracks. True, Montana has hits on hits, but he’s increasingly become a less important part of his own songs and has been unable to produce a noteworthy track without a feature from an important artist. Even with an incredible list of features, Montana’s 2020 effort, CB5 made minimal impact.

Not too many people have wanted to hear from Lil Pump in a while, but 2020 solidified the fact he might be the most annoying person on earth. Lil Pump (or Lil Pimp, as his bosom buddy Donald Trump affectionately calls him), is a petulant, attention-seeking 20-year-old infant who’s desperately clinging to any ounce of fame he still has (Lil Pump: “petulant” means childish and bad-tempered). His cringe-worthy and random support of Trump (arguably the only person who can rival Pump’s tantrums) ended in the young man not even voting in the 2020 election. Pump, go to a studio-less corner — you’re in timeout.

At this point, Blueface is closer to a reality TV star than a rapper (and a pretty good one at that). When he’s not filming women fighting in his Los Angeles mansion, he’s dropping forgettable albums of questionable quality. 2020 brought two new full-length projects from the 23-year-old California rapper, Famous Cryp (Reloaded) and Find The Beat. The latter should have served as an instructional message to Blueface, a rapper who raps miles off every beat he’s presented. We’d be more interested in keeping up with Blueface if all his verses were as complete as the surprisingly good feature on DDG’s “Moonwalking In Calabasas (Remix)” and that would spare us all the solo effort.

Our collective eyes rolled when Eminem named Joyner Lucas on his list of G.O.A.T rappers. Then we laughed at that notion upon hearing ADHD and Evolution, Lucas’s two full-length offerings of 2020. Fans deserve a medal if they managed to trudge through the nearly two hours of unfocused, redundant and sloppy music Lucas released this year. Ideas are only as good as their execution, so we need the Worcester rapper to take a year and collect his thoughts and rid his brain of the “I’m slept-on” narrative.

When YoungBoy Never Broke Again isn’t on Instagram Live making threats at anyone who looks in his general direction, the artist kinda formally known as NBA Youngboy is releasing music at a breakneck pace. He was the highest viewed rap artist on YouTube, but his songs have lost focus and purpose over 2020. Top brought forth some good tracks in “My Window” featuring Lil Wayne and “Drug Addiction,” but these tracks were overshadowed by the repetitive slew of average songs. An artist as culturally important as NBA YoungBoy requires a level of intentionality with which the Baton Rouge youngster is struggling.

With its only redeeming moments coming from guest performances by Denzel Curry and Rick Ross, Smokepurpp’s 2020 release Florida Jit may be the gold standard of mediocrity. We couldn’t be prouder of the Miami-based rapper’s decision to set aside the lean and pills, but selling less than 5,000 copies in the quarantined streaming era may suggest some audience disconnect on his end. We wish nothing but the best for the former SoundCloud rapper but instead of Googling fake data to bury this album’s narrative, maybe he should cool-it-out for the next year and refocus his talents — because he has plenty of it.

Welcome to familiar territory. Chance — this is far from your first time needing to be on this list. Mr. Chancelor Johnathan Bennett has ONE JOB: to release new, good music as a means to recover from the massive failure of The Big Day — but it’s been over a year and we are still waiting. With news breaking of Chance’s now ex-manager Pat Corcoran filing lawsuits for over $2.5 million regarding withheld pay, The Big Day continues to haunt him. The 2020 Twitter rants and ridiculously bad takes only proves Chance isn’t ready for redemption yet.