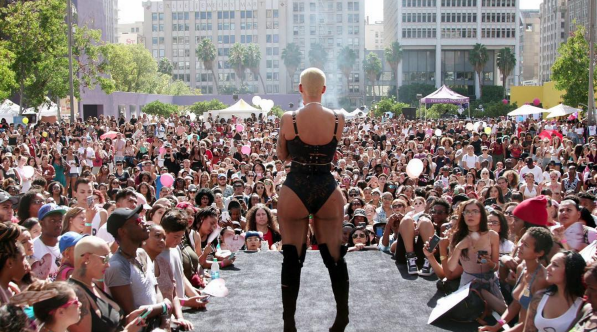 i love @DaRealAmberRose so much. slutwalk is free this year get there ?????? pic.twitter.com/msOlhsPXcq

I must say, I was extremely honored to have attended this event. It was a press conference for Amber Rose’s SlutWalk, a name which might throw off many, such as myself, the first time you hear it. It’s actually the exact opposite of what you’re thinking.

This SlutWalk is actually about women empowerment, which is its core mission, put on by The Amber Rose Foundation, a nonprofit organization that aims to promote discussion about women’s rights and equality issues.

Amber Rose, famous ex to both Kanye West and Wiz Khalifa, is doing what anybody with voice should be doing: speaking out on an issue. [insert “Fuck Donald Trump” by YG and Nipsey Hussle”].

Thank you @FlirtCosmetics! Now everyone can experience this year’s #AmberRoseSlutWalk! Tickets are almost gone! Do not forget to register for your FREE tickets using promo code THANKYOUFLIRT! Make a donation to support the cause! Visit www.amberroseslutwalk.com #ARSWTakeover #October1 #TeamMuva

I took my seat in the crowded (yet cozy) Burton Room of the Four Seasons Hotel in Beverly Hills, CA. Talk to me, Amber. This was a press conference if there ever was one. The sounds of cameras clicking and flashing did not stop the entire hour. Many media outlets were in attendance, ready to fire their well-thought out questions sitting patiently in their heads, most likely prepared the night before.

I say I’m honored because I got to hear Amber’s story in real life, from her own mouth. She revealed stories from her past that would make anyone react, man or woman. She also had media mavens Perez Hilton and Frenchie Davis by her side.

#AmberRose at her #SlutWalk press conference. Get your tickets for this Saturday and support her core mission of women empowerment. It's free this year! ?

I got to meet her after she took photos for press, and I let her know how awesome she was for doing this. She was so sweet. Feminism is not something I am super passionate about, and it made me realize how severe the issue really is. This reminded me of the Steve Aoki event the night before, when Steve revealed women’s studies to be one of the majors he studied at UCSB. I love it.

Some things that really stood out to me was when Amber confessed she loved being a stripper. “I loved the 1’s all over my body.” Amber’s advice to all women is: embrace the negativity. My translation: own it before it owns you.

The agenda for the evening: Rhymefest LA featuring The Soul Rebels Sound System, Talib Kweli, and A-F-R-O. The show took place at Fonda Theater in Hollywood, CA. I’m not going to lie, I was a bit worried. My past experiences attending Rhymefest events left me extremely confused on why they were so … dead, especially with everyone spending so much energy complaining about “mumble rap.” They always have a pretty good headliner that you would think would sell.

This event had a great turn out, though. While it definitely did not compare to the sold out Gallant show here last week, it still had people turning out to support. The live music coming from The Soul Rebels literally had us feeling like we were on the streets of New Orleans. I couldn’t imagine anyone not enjoying this performance. The live jazz, trumpets, and drums were beautiful.

Shout out to Talib for blessing us with his hits. “Hot Thing” and “Get By” backed by a live band was all I needed this Thursday evening.

Let’s take a break on the Hip Hop scene, and take it back to our childhood one time. There was absolutely no way you didn’t like Blink 182. They were the definition of rock … what I like to call “emo music.” I would compare them to rock as Nas to Hip Hop. I’m not sure which side I’m being more generous with the compliment.

Home for the next 2 days. #LosAngeles #California Photo By @justwilliet

Every band has a story. This one is now defined by when legendary lead singer Tom DeLonge called it quits. In fact, this was actually the game changer for some. Many fans passed on the show because of the mere fact that Tom wasn’t going to be there, thinking it wouldn’t be the same.

Wrong. It was just as good. And I say that because people don’t realize how hard to be his replacement. Matt Skiba, singer from Alkaline Trio and long-time friend, could not have done a better job. Can you imagine the pressure? He had to sing all the Blink hits, songs Tom personally wrote about what he was going through at that point in his life.
I looked out at the sold out Forum in Inglewood, CA, and had a moment. This was every musician’s dream.

Literally right off the bat, they open with “Feeling This,” classic Blink 182. I jumped. I was a little kid all over again. This night was about to be epic. I was definitely a Vans Warped Tour attendee. I was emo.

The night was magical. I know you guys love to hear about my crushes, so let me just get this over with. Travis Barker is literally bae. Watching him go HAM on the drums for 1.5 hours tonight was every girl’s dream. Shirtless, tatted… you get the picture.

I can’t forget Marc Hoppus on the guitar and vocals. They make such a great team. I’m pretty sure every single person left The Forum satisfied. Shout out to my homeboy who came last minute. He literally could not stop reiterating how much Blink 182 was his favorite band. I loved it every time.

Ended the night with both my homegirls getting parking tickets for parking in the residential neighborhoods. Welcome to “Los Angeles.”

The annual Mad Decent Block Party invades Los Angeles, making it a memorable first of the month for all those who attended. Shout out to my girl Jessica at Mad Decent for this hookup! She’s the illest. One time, I was responding to her email on my phone and closed it out with “Shirts” instead of “Shirls.” We laugh about it til this day. Autocorrect definitely has its moments.

Man, I remember when these things were free. This year, it was $60 dollars for a GA ticket. No problem though. People are going to pay to see Diplo. That’s the reason we pulled up at 8pm, although I was kind of down to see Ke$ha. But I definitely missed out on Dillon Francis’ surprise set around 4pm. That’s (EDM) bae.

Man, Diplo is too lit. I honestly can’t explain his set with any other word. He had me and my homegirl twerking. Luckily, we had some space in the press pit. Getting there was the real mission. It was madness out in the crowd. The way he mixes Hip Hop with EDM and hints of trap though… I truly forget how good he is.

This event definitely fit the criteria of a rave/music festival: shirtless guys, half naked girls… I even saw guys rocking bandanas over their mouths. Didn’t know that was still a thing. Diplo did not disappoint his fans. Los Angeles Center Studio was PACKED. So much body heat so we felt like we were indoors, even though it was totally outdoors.