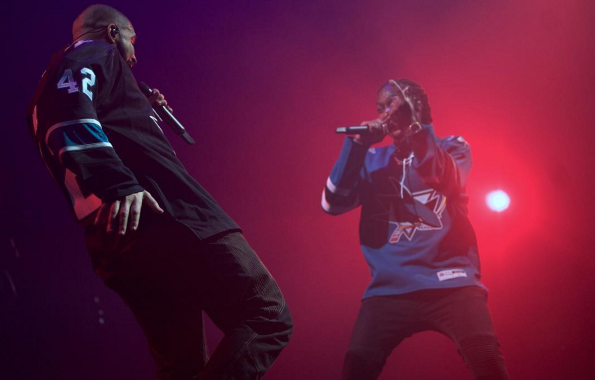 You hear that girl screaming in my terrible Snapchat above? Yeah. That’s my best friend from back home. Those screams happened all night, like worse than teenage girls screaming for Justin Bieber status. Sadly, she was definitely not alone. Special shout out to her mom for camping out on the computer and copping the tickets right when they went on sale. (Mom of the year?) Even I didn’t have the patience to do that…

Speaking of awards, hearing “Trophies” live reminded me of the trophy emoji, which comfortably sits in my most recents.

Towards the middle of the show, the DJ goes on a short stint and plays 15 seconds of a track and moves on. Drizzy literally has so many hits, it would be utterly impossible to fit it into one show. “Pop That” got me so excited and Drake didn’t even perform his verse. Womp womp. That’s the best part.

Drake hit the stage around 9:30pm, and played until 11:45pm. Future had a nice little solo 30 minute venture. Drake really put him on, calling him the “turn up god” numerous times. My eyes were split between him and DJ Esco the entire time he was on stage.

Future takes the stage in a San Jose Sharks jersey to appease the Bay Area crowd.

The show took place at SAP, which is home to the San Jose Sharks, and also a venue I grew up going to. It will always be HP Pavilion to me. Shout out to Future rocking that Sharks jersey, though. The entire night Drake kept saying San Jose was his best crowd on tour. Sus. He probably says that at every show.

“Jumpman” had the entire stadium on their feet. What a Time to Be Alive.

“I love Dom, that should be your new tat!” True story, I love Dom Kennedy. Seeing this post on IG got me so excited. We were literally just talking about how Dom has been M.I.A. but deep down, we all knew he was just plotting his next move.

I remember when his first comeback single “U Got It Like That” featuring Niko G4 (definitely in attendance tonight) dropped. I freaked out and listened to it on repeat for 30 minutes. The next day, I was appalled to find a handful of my friends hating on it. That just shows how subjective music is. Don’t ever be afraid to speak your mind. Your opinion counts.

So while most rappers have little album listening parties at a studio or small shop on Fairfax, Dom sells out the El Rey in Los Angeles. Literally. One of L.A.’s most popular venues completely sold out. For a listening party. Damn. He’s really got a fanbase out here. There were some die hard fans in the front row.

#DomKennedy played us his entire #LosAngeles Is Not For Sale Vol. 1 album tonight. ?????? @dopeitsdom

This album is called Los Angeles Is Not For Sale Vol. 1. He literally comes out saying “I got the whole album on this laptop right here,” holding his Macbook in the air. The crowd goes nuts.

I’m not sure how this happened, but we ended up on stage. Dom started off the show by answering questions from fans they brought on stage. I thought that’s why we were there, but nah. Shout out to Sydney at Goldenvoice, who always got my back.

Dom being an L.A. cat, you know he had to have his squad on stage. Jay 305, Polyester the Saint, Casey Veggies, G Perico, Warmbrew, just to name a few. I asked Casey if he was on this project, and he said “nah, the next one.” This just reminded me that this project was just Volume 1. Dom has really just been putting in work … on the low. I can respect that.

“96 Cris” was another recently released single that I fucked with heavy. (Excuse the typo in my Snapchat.) My boss told me to say hi to his manager Archie, so I tracked him down. I asked him when the album was dropping he said “no release date.” Sorry guys. Patience is a virtue.

Shout out to the free #OPM shirt! Saw the box full of them on stage and swooped like a ninja. At the end of the night, he hit us with the “Get Home Safely.” It was perfect.

If you guys haven’t seen Steve Aoki’s documentary on Netflix, I’ll Sleep When I’m Dead, please do and report back. This short film inspired me like no other, and truly made me respect the cake-throwing DJ like no other. The title says it all, and is a motto I have for my own life. Why sleep when there’s work to be done?

I actually never watch Netflix, but I watched this one. Steve really gets real personal, detailing the hardships he had growing up with a father, a man he viewed as a god. By the way, papa Aoki is the founder of the chain restaurant Benihana. The best part: this connection played no part in Steve’s continual success.

"follow your gut. stay true to your passion. it's about the journey" – @steveaoki pic.twitter.com/DeiDsrwL35

This event had Steve answering questions in a talk show format. To be honest, a lot of the content felt like a recap of the documentary. It was rather exclusive, with a head count of maybe 25 people. We were all tucked away inside the theater on the second floor of the Grammy Museum at L.A. Live in Downtown Los Angeles. So much history here.

Steve’s story is remarkable, especially for anyone chasing a dream. This video took three years to film. A fan asked why he decided to drop it now, and his response was a laughable “I dunno.” Steve is the most down-to-earth. I cheered when he reminisced over his days at UCSB. He responded with a familiar “Go Gauchos.”

Next up, Daye Jack at No Vacancy, a speakeasy bar/lounge in the heart of Hollywood, CA. I’ll admit, I wasn’t too familiar with his music prior to this. After seeing him perform tonight, I became an instant fan. Don’t you love when that happens? This event was in honor of his Surf The Web project he just dropped.

I would describe Daye’s music as that real, chill Hip Hop. It’s that type you can just vibe to, putting you in that feel-good state of mind. I would compare him to Pell, who uncoincidentally introduced him on the mic. It was cute. Daye did his thang while standing on the ledge.

I introduced myself as he was prepping for his set. He was extremely nice and had this genuine aura about him. Born in Nigeria and raised in Atlanta, the future looks promising for the 20-year-old. Fuck, I’m old.