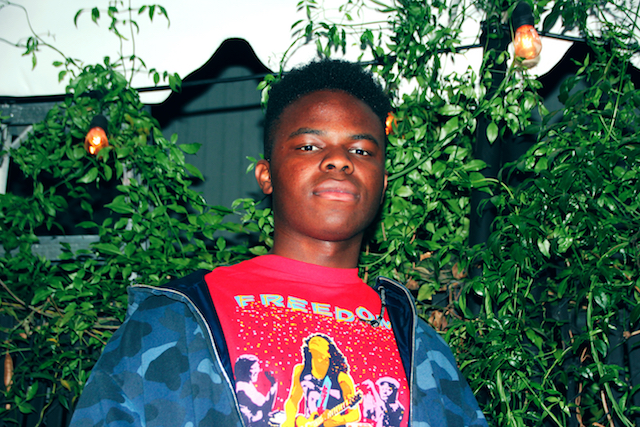 Daye Jack Is The Internet’s Next Underdog

Unless an artist has a significantly large following or buzzworthy single that gets the blogroll in a frenzy, labels aren’t quick to sign just anybody. Considering the current music industry economy, it’s just too large of a gamble. Artist development be damned. And to think, this is all a result of the Internet generation and digital distribution. This is what makes Daye Jack so compelling. Never having much hype and anticipation behind his projects or singles, the Nigerian-Atlanta transplant created a light buzz around him in 2014 back with the release of Hello World which landed him a deal with Warner Brothers. All of this happened while he was attending NYU majoring in computer science. A year later, his follow-up Soul Glitch almost seemed stealthy in its release. That’s because Daye is an old school artist with similar sensibilities. He’s a development project for a label that’s deep into the digital age. There’s huge potential in him if “Hands Up” featuring Killer Mike or the recently released “Finish Line” single are any indications. Also helps that he’s been working closely with storied producer Mike Elizondo who’s worked with everyone from Dr. Dre to Fiona Apple.

Hanging out with HipHopDX before he opens for Pell at The Los Angeles Echo, Daye Jack explains the meaning behind “Finish Line,” recording in L.A. and riding the line of having a message and having fun.

Daye Jack Once Wanted To Be The Black Steve Jobs

HipHopDX: I really fuck with that “Finish Line” joint sir. It’s a lot lighter than your previous works. How did that come together?

Daye Jack: I did it with producer Mike Elizondo who is executive producing my new album I’m working on right now. We wanted to do something funky, something you can dance to and just feel good.

DX: Between this and the “Hands Up” joint with Killer Mike, it’s a departure from Soul Glitch.

Daye Jack: Soul Glitch was like a mood in regards to sound and texture. After that, I didn’t want to jump and do another one. I’ve been there, done that.

DX: You’ve been signed to Warner Brothers for about a year now. What was the process of landing a deal there?

Daye Jack: It started with me putting stuff out on the Internet. I put out my first tape Hello World on a few mixtape sites and SoundCloud. I was like whoever listens to it, listens to it. That’s what spiraled into everything else happening. A couple of blogs hit me up and I sent demos to people. Just trying to catch different ears. I remember I was going to school at NYU studying computer science at the time. I was in my dorm room like yo, Mike Elizondo at Warner wants to meet you and chat. Literally, the next day which was a Saturday, I flew out to L.A., had a meeting, played some more shit and met Mike. Flew back and Monday I was back in class. It was crazy.

DX: From being interested in computer science to music, though?

Daye Jack: I was making music long before I thought I could pursue it as a career. I was writing little raps, singing and doing my thing. I liked computer science because it was creative. My dad worked in IT when I was really young and I thought it was cool. I really looked up to Steve Jobs at the time too. This is the pocket where I could be creative. I was trying to see if I could be the black Steve Jobs or something. Pursuing that, I realize that what I wanted to do was be creative without being in a box.

DX: Steve Jobs literally helped change the way we listen to music. Why did you look up to him?

Daye Jack: He changed everything but, I look up to the fact that he wasn’t the technical dude. He wasn’t the kid who at five-years-old was making the craziest shit. It was seeing someone who was normal yet creative and had cool ideas. We’re in the pocket right now to where it’s about who has the coolest app. We don’t need to worry about the technical stuff, robots can do that. Computers can do that. It’s about ideas now. The Internet is all about ideas.

DX: Think we’re giving up to much to the machines, though?

Daye Jack: Nah, because I’m fully bought into it.

DX: No fear of A.I. taking over like The Matrix

Daye Jack: I was just rewatching The Matrix the other day. That’s crazy. I think the Internet let me put out music and have a platform to do stuff. I just want to be creative. Nothing to be scared about.

”Finish Line” Was The Realization Of Victory

DX: What does “Finish Line” mean in terms of the album?

Daye Jack: The idea was waking up and thinking, damn, I already won. You’re just overconfident. It’s about someone who is used to not having that day where you feel like you already won. It’s about looking at that day and writing a song about it. The whole thing is about trying to be confident and win, but understanding the climate and position you’re in. People don’t want you to take that W. That’s where all the lyrics about being black and being young.

Ural: When was that moment you realized that you’d won?

Daye Jack: I think when I realized I was living in LA and doing this for a living. Not even on some bragging type stuff. A lot of people don’t get the chance to leave home and everything. Some people don’t get the chance to be where they’re supposed to be. Some people have to work jobs they don’t want to and I’m here living and working on an album. Some days, I’m kind of down or whatever. Other days, I can just reflect and that’s how I ended up with “Finish Line.” It’s about the day I reflected and everything worked out. It’s me being grateful and happy.

DX: Going back to your track with Killer Mike, this isn’t the first time you’ve spoken about serious social issues in your music.

Daye Jack: Exactly, it was the first time I touched on it. It is definitely a part of my music. I wanted “Finish Line” to be really super broad. Hey, this is a pocket and feeling, but I’m going to expand on that all on the album.

DX: Where do you get that sense of awareness from?

Daye Jack: I think it’s because I hate songs that are too preachy. I love songs with great melodies and I hate songs that don’t say anything. I’m always trying to find that middle ground where I can make the best song possible. And once I got that feel and melody, I want the lyrics to drive everything home. The first listen, you can just groove to it and maybe on the second or third listening, you hear something.

Ural: You moved to the states from Nigeria right?

Daye Jack Yeah when I was six-years-old. The whole story is pretty cool if you want to go deep into it. My dad is from San Francisco and after he graduated from college, he visited my mom and they had a kid who was me. Then the whole family moved. Last time I went out there was a couple of years ago. It’s cool, though.

Daye Jack: It’s crazy, he’s iconic. Out of all the people I mess with as human beings, Fela Kuti, Basquiat, Amy Winehouse, Kurt Cobain and Steve Jobs are like the top five people I look up to.

Ural: Hip Hop has an interesting fascination with Kurt Cobain.

Daye Jack: For me, he feels very relatable. Also, I’d put Eminem as the sixth man in that group. They’re people you can relate to. Nothing about it seems fake. They’re very human. Their flaws are something I could relate to.

Ural: You did Soul Glitch in New York. Did recording your album out here have an affect the recording process?

Daye Jack: That definitely happened. With Soul Glitch, I was in New York. I didn’t experience the weather at the point. I wasn’t going out much. I was chilling at home hitting people up like send me beats. My room was always dark, it was always cold and I just had my headphones on writing. That was the reason the project was so moody. It was taking my head and putting it where I was at the time. I move to L.A. and literally it’s sunny all the time and no one works it seems. Everyone is just chilling outside at all times. With that, probably because of access, I’m in the studio with people writing these songs from scratch and catching vibes. We’re experimenting and messing around musically. That’s why with the new album, people are going to get a range. It’s still going to be cohesive, but will have a full range and more jumping around.

Ural: What are you experimenting with on the album?

Daye Jack: Creatively, I’m experimenting with everything I liked about the early 2000s. I was really into Justin Timberlake’s Justified. It’s a slept-on classic.

Ural: How old were you when that came out?

Daye Jack: I was like six or seven-years-old at the time. I’m experimenting with everything that was on the radio at the time. I’m looking into the Pharrell and Timbaland type stuff. I’m playing around with the Outkast stuff and playing my own pocket of sounds. It’s all about what I grew up on.

Ural: Was it difficult adjusting socially out here?

Daye Jack: Honestly, for the first five or so months, I didn’t even go out. What made me really like being out here was when I started my routine. I’d wake up, go to the same coffee shop, go to the studio, go chill with the same homies and repeat that. Once my routine clicked and I settled in, that’s when everything started to come together musically.

Ural: I know you’re into soccer. It’s a bunch of places to play out here.

Daye Jack: I’ve played a couple of pick-up games out here. I tried to play a pick-up game and overestimated how fit I actually was and could barely breathe. At the end of the game, I was gasping for air. I played another game and I overestimated how fit I was again and threw up at the end of the game. That shit was wild. I still play, but now I’m using it as a way to stay in shape.