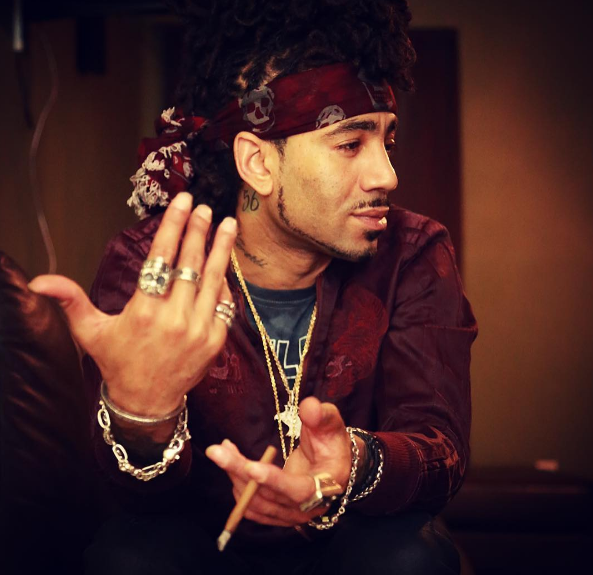 “DJ Esco, let’s gooooooooo!” So this night marked night one of Drake and Future’s five stops in Los Angeles for their Summer Sixteen Tour. Initially, there were only three shows at Staples Center, but due to high demand, they added two more shows at The Forum. They would.

We saw DJ Esco was having a $5 show at The NOVO in downtown LA, across from Staples Center. Yes please. I actually have the biggest crush on Esco, the coolest DJ in the world. Later that day, we saw his tweet, which was concerning. Afterparty? This meant homeboy wasn’t coming on until hella late.

It was a sacrifice I knew I had to make. Doors opened at 9pm, so I could only imagine what the rest of the crowd was going through. Through my experience, when an artist does an afterparty or club appearance, it’s usually after 1am and they usually only perform a couple tracks. After making us wait for two hours, I started to realize this was a feeling all too familiar.

Royce Rizzy performs a surprise set at The NOVO.

There was a DJ who played for a good couple hours, hyping the crowd up for Esco’s set. Random guest of the night: Royce Rizzy. He told everyone how he had just got a call about showing up, and here he is. For those who don’t know, Royce is Madeintyo’s brother. He definitely performed “Uber Everywhere,” a crowd favorite.

DJ Esco hits the stage at 1am.

We were all joking because, DJ Esco… does he have his own DJ? He’s always been known as Future’s DJ, but now it seems he’s pursuing a solo venture as an artist. He recently dropped his “Esco Terrestrial” mixtape. I had a photo pass so I was able to get real close and personal for the first three songs. Good thing he has no idea I’m in love with him.


He literally played all the bangers you would hear at a club. Mostly Future and Drake of course. It was expected. His energy was lit. Esco is known for his little moonwalk dance. Basically, he’s adorable. Oh, and he loves the dab.

I live about 10 minutes away from LACMA, the famous Los Angeles County Museum of Art. Some of you may immediately think of the photo with all tall lamp posts, the one that tourists drools over. The best part: the lamps aren’t even part of the museum. It’s outside of the museum on the street, and you literally go to take a picture (evenings are best). I can’t help but sing “All Of The Lights” by Kanye West every time I walk by.

Speaking of, Kanye actually had his “All Day” music video played here on a huge projector inside the museum. It was its own separate exhibit, which cost an extra fee even if you were a LACMA member. Get that money, Ye.

This exhibit was for Guillermo del Toro, a famous horror director. Isn’t the name spooky in itself? He’s known for his extreme and outrageous work. LACMA describes him as “one of the most inventive filmmakers of his generation.” Some movies you may recognize: Hellboy, Pan’s Labyrinth, and more recently, Crimson Peak.

Inside the Guillermo del Toro exhibit at LACMA.

The art pieces in the exhibit were so outrageous, in the best way possible. We’re talking human size insect creatures mixed with a religious immortality. They were freaky, like this dude with no legs. There were paintings, sculptures, videos, photos, statues, you name it. His work was displayed in every form of art possible.

Floating head in the middle of the Guillermo del Toro exhibit.

Excuse my Snapchat caption, but this floating head actually scared the living crap out of me. Is this Woody Allen? Bill Gates? There is honestly probably a living, breathing soul behind this face, watching everyone in the exhibit walk by. [Insert horror movie sound effects].

Private screening for Kicks in Hollywood.

Later that night, I attended a private screening of Kicks, a movie starring CJ Wallace, Biggie’s son. Ural Garrett and I interviewed him at another screening earlier in the year, and I couldn’t help but trip out over how similar he looked to the Notorious B.I.G. Like father, like son.

The event took place in Hollywood at Estrella Ma’s Theatre on Sunset Blvd. They have this private movie theater in the back of the venue that’s absolutely gorgeous. It’s small, like one of those theaters you see in a mansion in the hills. It was laced with the most luxurious couches. Yes, a couch theater. My girl and I melted.

She actually works in film and is the director’s assistant on the first Maze Runner. They’re actually going to Africa in October for three months to film. I told her I was coming in her suitcase.

Complimentary snacks and drinks at the private Kicks screening.

They also provided popcorn and soda. I had just come from yoga too so I felt underdressed.

The official CD of the soundtrack to Kicks.

I was given the soundtrack beforehand and was super excited. I am extremely old fashioned and love CDs. It’s all I listen to when I’m cruising in my whip. Mac Dre on the tracklist? It’s like they knew I was coming. The film takes place in the bay, a.k.a. home. I was just there for Hiero Day in Oakland over Labor Day Weekend, which was the perfect scratch to my itch to visit home.

The film is about a 15-year-old named Brandon who risks it all in the quest to retrieve his stolen pair of Air Jordans. It is directed by Justin Tipping and also stars Mahershala Ali and Jahking Guillory.

I really enjoyed it. There’s definitely Hip Hop laced throughout. If you like Hip Hop and sneakers, this movie’s for you. It was only 80-minutes-long so you’re okay if you have ADD. Shout out to Ryan and Erik with Focus Film who invited us out! Be sure to catch it in theaters now.

POP UP SHOP FOR COLD SUMMER THIS WEEKEND @wildstylela STARTING THIS FRIDAY …. See you there ? ….

Mustard on the beat hoe. To add to the list of Drake, Future, and Rihanna pop-up shops in Los Angeles this weekend, DJ Mustard joins the madness with his Cold Summer collection. When I found out, I was most excited because it was held at Wildstyle, which is owned by and located across the street from Joyrich, my old stomping grounds. Yes, I used to work there and yes, I’m obsessed with their clothes.

Shout out to Ayanna from Roc Nation, we actually got to interview him on site in front of this dope backdrop. It consists of a photo collage of Mustard’s fondest memories, including one on a plane ride with YG and one of Mustard laughing so hard, he fell to the floor. Cute.

A windbreaker from the DJ Mustard Cold Summer collection.

So, I was expecting a little more, but Mustard actually only had three pieces of clothing to sell. It was a T-shirt for $60, a hoodie for $84, and a windbreaker for $120. Yes, I remember the prices because I remember thinking, damn haha. Wildstyle is known to carry only the best brands, though.