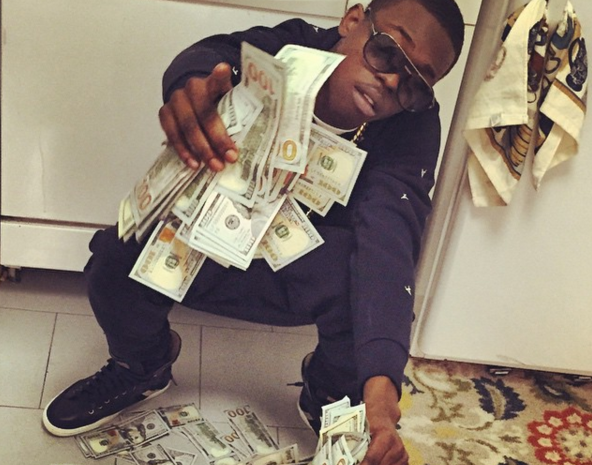 2014 was supposed to be a breakout year for Bobby Shmurda following the platinum hit and viral sensation “Hot Nigga.” Then, it all came crashing down once the Brooklynite, closest homie Rowdy Rebel and other members of New York’s notorious GS9 crew caught conspiracy, gun and drug charges. While Shmurda basked in the glory of signing to Epic Records and giving himself a better situation, he couldn’t leave the streets alone. Sitting in jail for around two years without a court date and a bail was set at $2 million, the record label who once had him dancing on tables didn’t see any financial incentive to help. Fast forward to last week, both Shmurda and Rebel took a plea deal that allowed them to serve seven years including time served.

Speaking exclusively with Complex this week following reports, Shmurda and Rebel gave poignant thoughts about the handling of their case and the alleged racial politics involved. It might be time to have a serious discussion about the lessons aspiring rappers can take from such a tragic situation. With that in mind, HipHopDX Senior Features Writer Ural Garrett and Contributing Writer Dana Scott give their thoughts on recent developments.

What Can Hip Hop Learn From Bobby Shmurda’s Plea Deal?

Ural Garrett: The rise and fall of Bobby Shmurda is a disastrous accumulation of everything wrong with major labels being so quick to snatch up artists following viral social media sensations, personal accountability, New York’s zero tolerance toward guns and systemic racism. One of the most heartbreaking moments of the Complex interview comes near the end. “I’ve lost things bigger than my music career,” says Shmurda. “I’m a real nigga from the streets. I done lost friends, so them doing this to me isn’t that big a deal to me. My pops is doing 120 years, I have friends doing life, I have niggas in the grave.” To think, this all comes as Jay Z recently dropped his New York Times video detailing the exact systemic circumstances that eventually led to Shmurda’s downfall. Add a 19.5 percent rise in homicides with 72 percent percent of those at the hands of gun violence, it’s clear why The Big Apple’s strict gun laws haven’t been too friendly to more street orientated rappers.

Don’t believe it? Ask Lil Wayne and Ja Rule. Speaking with Angie Martinez earlier this year, Birdman said he wasn’t a fan of visiting New York due to its strict gun laws. In Baby’s case, I believe it was more about his inability to show off that gold AK47 there. One of 2016’s biggest news stories in Hip Hop revolves around Troy Ave possibly facing a worse fate as he’s being hit with attempted second-degree murder and four counts of criminal possession of a weapon. Bottom line, watch the gunplay in New York. They don’t play that shit.

From reading the interview, Shmurda clearly understands what he was up against not only as a high-profile defendant but a black man in America. Bringing up the hypocrisy regarding Brock Turner’s rape case and lack of real consequences had to be a “woke” moment for him. Spending some time behind bars may serve him well and if he’s got enough in the stash to release semi-quality music while in prison, the transition into civilian life might not be as difficult.

Let’s be honest here. Though Shmurda and crew have come to terms with Epic not being able to offer real assistance, the label had no real business signing Shmurda that early in the first place. Sha Money’s “resignation” from Epic following the arrest proved just that. The street stuff was attractive to them until the reality socked them in the jaw. And, that label isn’t alone either. The era of signing artists based on songs going viral on social media is slowly coming to end like the hated Ringtone Era. Major labels aren’t the life changers they once were and the recent success stories of everyone from Chance The Rapper and D.R.A.M to Frank Ocean are proving just that.

Dana Scott: The distinction of class and race as pawns on the legal chessboard— with a loud gavel bang. This plea deal teaches us that privilege leans away from minorities in our society. Like GZA once rapped, it’s like elephants and ants on seesaws. With every pun intended, privilege is the white elephant in the room here. Per Shmurda’s comment about “rapists getting six months” whereas he’s getting seven years for his first gun charge, I believe that Shmurda is referring to Brock Turner, the young white convicted rapist from Stanford University who is near the same age as Shmurda. He got time served after receiving five counts of rape of that unconscious girl behind a dumpster outside of a college party. Turner could’ve killed the girl, and had his 1-percenter parents boohooing to that judge to grant him leniency, and he got it because the judge was sympathetic to white elitism. Turner’s charges added up to 14 years in prison, he was suggested to have a “moderate” sentence for six years. Ultimately, Turner was only sentenced to a mere six months to serve, managed walked out in three, and got three years probation with a registration as a sex offender with rehab required.

Social status is a major factor for those who can afford to win their way out of court, depending on who is overseeing the case. And class doesn’t pertain to just race because we saw that in the case with Diddy and Shyne (check Nas’ song “Purple” where he said “I don’t like the way P. Diddy did Shyne with different lawyers” as they were co-defendants in that shooting case at Club New York from New Year’s Eve in 1999). Shmurda didn’t get funded by his record label Epic for his legal eagles necessary to fight the case, so he got hung out to dry and had to cop that plea because he knew he was in checkmate. I’ve seen this happen with black friends of mine sent off to jail with no funds beyond using public defenders who really get paid close to nothing as a legal resource, and they get sent off for minor offenses that result in five-year bids.

It’s called the “judicial system,” but at the end of the day, it’s strictly business.