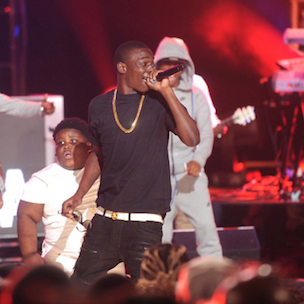 Bobby Shmurda’s $2 million bail package has been put on hold according to the rapper’s lawyer and a spokesperson for the prosecutor in his case. The 20-year old “Hot Nigga” rapper will remain behind bars for now.

The development comes nearly a week after initial news that Shmurda had posted the required $2 million bail to be temporarily released while awaiting trial for a series of gun and drug charges. The bail originally posted on Friday (January 30) was scrapped on Wednesday, according to The New York Times.

Shmurda’s lawyer, Kenneth Montgomery, told the Times that another bail package will be prepared shortly. “We’re trying to do a new bond application and are in the process in the figuring that out,” he said. “We’re hoping to get it done within the next week.”

Montgomery also called the $2 million bail “ridiculous” and downplayed his client’s role as a GS9 member. “Bobby is not claimed to have shot anyone, he has no drug dealer weight on him,” he said. “It’s simply a gun case and some phone conversations.”

The $2 million bail package was presented to the court on Friday by bondsmen Ira Judelson who has offered his services to the likes of Ja Rule and DMX, according to The New York Times. Judelson posted bail on behalf of Shmurda’s “management associates” who offered him collateral in exchange. Notably, Shmurda’s label Epic Records had no part in the bail package.

Shmurda has spent over six weeks in jail on charges including reckless endangerment, criminal possession of a weapon, conspiracy to commit murder in the second degree, and criminal use of drug paraphernalia.