The Most Important Mixtapes Of 2013 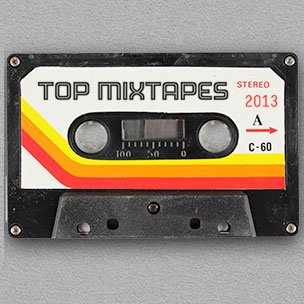 As the gray line between amateur projects and full-fledged studio albums continues to blur, 2013 saw another slew of artists blow up off of mixtapes. In the few short years since Drake “got rich off a mixtape,” emcees have continued to take their independent work more seriously, as veterans and up-and-comers alike have used the (mostly) free outlet to gain popularity and increase their fanbase.

This year, a new wave of artists dominated the mixtape scene, pushing the boundaries of creativity in Hip Hop as they formed alliances, partied and rose to stardom. While the future is bright for the 10 artists named to HipHopDX’s “Best Mixtapes of 2013” list, one successful mixtape doesn’t guarantee fame and fortune. But if these projects are any indication of the caliber of talent waiting in the rafters, the next batch of Hip Hop superstars is just as loaded as 2014 NBA draft class.

Compiled by the HipHopDX staff and 2013 contributors. Captions written by Andrew Gretchko.

A year after a 10-day suspension from high school earned him the respect of fans across the country, “Acid Rap” proved that 20-year-old Chance the Rapper has the potential to lead the current class of emcees. With features from the likes of Twista, Ab-Soul, Action Bronson and Vic Mensa, Chance’s critically acclaimed project feels more like a polished album carried by lyrical creativity on a level rarely seen—one that has since earned him his own spot as a featured artist on tracks with Childish Gambino, James Blake and even Justin Bieber. From drugs, girls and his increasing fame to the plight of Chicago’s less-affluent neighborhoods, Chance has proven that he’s ready for a big jump into the spotlight in 2014.

Rapsody – “She Got Game”

From Lil Kim to Nicki Minaj, female emcees have faced their own set of trials and tribulations. But when North Carolina-based artist Rapsody released “She Got Game” this summer, she not only proved that she had the talent to compete with today’s best rappers, but she also proved that she’s capable of changing the game itself. With songs like “Jedi Code” that pair her with Phonte and Jay Electronica, to “Coconut Oil,” which sees her rap alongside the Wu-Tang Clan’s Raekwon, Rapsody is no mere backup singer or sex symbol; her verses at times outshine those of her male counterparts, earning her the mentorship of legendary N.C. producer 9th Wonder, who produced the majority of the mixtape. Her critical acclaim and recognition couldn’t be more deserved; if you’ve slept on Rapsody for this long, it’s time to wake up.

The buzz about Southern Rap currently belongs to OutKast’s rumored 2014 return, but being overlooked has yet to stop Mississippi’s Big K.R.I.T. Since the release of “Return of 4Eva” in 2011 and “4Eva N a Day” in 2012, K.R.I.T. has received critical acclaim and a record deal with Def Jam, but 2013’s “King Remembered In Time” was more than just another notch in his belt, it was a project of album quality that vaulted the producer/emcee into the ranks of some of the South’s most storied Hip Hop artists. Trap may be prevalent below the Mason Dixon line, but K.R.I.T.’s lyricism and complex beats set him apart from his competitors, with tracks like “R.E.M.” serving as a reminder that while K.R.I.T. is already 27, his career will last for years to come.

The Internet has forever changed the way we interact with each other, and Hip Hop is not alone in feeling the effects of one of mankind’s greatest technological achievements. Chicago’s Vic Mensa, a 19-year-old from Chicago, used his project to put the hectic pace of the Internet, along with its wide-ranging subject matter, into words, enlisting the help of his best friend and former Save Money Crew member Chance the Rapper along the way. “Innanetape” also displays the ongoing career of the former Kids These Days frontman, who has evolved from the leader of young a Hip Hop-driven band to a creative emcee poised for a breakout year thanks to his lyrical talent and the vocals which helped Kids These Days find a following.

Many emcees have predicted their future fame and fortune. Few have predicted the weather. After declaring that the follow-up to his highly successful 2012 mixtape “Blue Chips” would be released on “The First Day it rains in November,” the chef-turned-rapper-turned-professional hype man got lucky when his native Queens, New York saw a drizzle on November 1. The “masterpiece theatre” which he promised his fans, however, was the result of hard work and a continued chemistry with production team Party Supplies. The usual bragging and boasting can be found on nearly all 19 tracks of “Blue Chips 2,” along with his expected mix of sports and cooking references, curse words and grandiose remarks about things he may or may not have done with prostitutes.

While it may not have made its way onto mainstream radio like J. Cole’s Born Sinner or been nominated for a Grammy Award like Jay-Z’s Magna Carta Holy Grail, Nipsey Hussle’s latest mixtape, “Crenshaw,” may have been just as important to Hip Hop in 2013. “Crenshaw” finds Hussle dealing with the same issues of drugs and violence in the world around him, and while the production (featuring 9th Wonder), the guest spots (Rick Ross and Dom Kennedy) and the lyrics are all impressive, this mixtape stands out because of what it stands for: most mixtapes are released for free, but instead Hussle chose to give his fans the option of purchasing a special limited edition hard copy of his latest project for $100. Just like every project, “Crenshaw” had its detractors, but the mixtape turned heads when Hussle’s tactic resulted in fans lining up to buy his work, and the near collapse of Hip Hop’s corner of the Internet after Jay-Z personally purchased 100 copies himself.

Dizzy Wright may try his best to avoid being dubbed one of Las Vegas’ heroes, but 2013 has turned him into one of Sin City’s most popular acts, thanks in large part to a style of lyricism that reminds many of the genre’s brightest hour during the ‘90s. With “The Golden Age,” Wright asserts himself as a rapper who is not to be overlooked, but isn’t afraid to mix up his aggressive style with introspective tracks such as “Maintain,” which features Brooklyn’s Joey Bada$$, another artist whose sound has been compared to the period in Hip Hop from which Dizzy’s mixtape draws it’s name. While the length of “The Golden Age” (22 songs) may deter some, there is little filler to be found; if anything, the mixtape’s tracklist should serve as a reminder that there’s plenty more in the tank for Wright.

Since his budding Rap career started at age 14, a lot has changed for Inglewood-born emcee Casey Veggies. From his early work with OFWGKTA, to partnering with the streetwear/management company Peas & Carrots Intl., Veggies has become yet another important figure in the revitalization of west coast Hip Hop. “Life Changes” finds Veggies on the verge of stardom and provides him with a chance to reflect on his rollercoaster ride to success on songs like “Young Winners,” which showcases his lyrical prowess. With a spot in the exclusive core group of up-and-comers and a debut album on the way, Veggies should have no problem picking up where he left off next year.

Unlike many of the artists on this list, Pusha T earned his stripes long ago. Yet, in a Rap game marked by the seemingly instantaneous rise and fall of a career, it’s no small feat that Pusha T has found renewed success years after the popularity of his group Clipse as he nears his 40th birthday. Rapping with the same raw intensity, Pusha T prefaced My Name Is My Name with his “Wrath of Caine” mixtape. It was another reminder that the veteran G.O.O.D. Music emcee is still very much able to put out music able to amp up those waiting in the trap without sacrificing his trademark lyrical content.

For those familiar with the Odd Future collective, Vince Staples is nothing new. From numerous appearances on OF tracks, to a stint spent living at producer Syd tha Kid’s house after being kicked out of his own, Staples had built a name for himself around the popular West Coast group. But not every rapper has 2 Chainz’s ability to make a living off of features alone, and Staples lacked a signature solo project. Enter “Stolen Youth.” Produced exclusively by Mac Miller (whose production creds have continued to grow under his alter ego nickname Larry Fisherman), “Stolen Youth” features T.D.E. emcees Ab-Soul and Schoolboy Q, but the real focus is on Staples, who has since performed across the country as part of Mac Miller’s “Space Migration Tour” and earned a nationwide fanbase at just 20-years-old. Look for the relationship between Staples and Miller to continue in 2014.

RELATED: The Most Important Mixtapes Of 2012