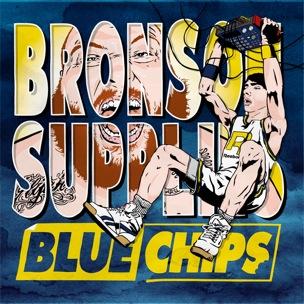 For someone who has only really been well known for the last year or so, Action Bronson has put in quite a bit of work. With multiple studio albums already under his belt and a handful of mixtapes in his back pocket, he could be forgiven for needing a break or running out of steam. Nevertheless, Bronson is back with Blue Chips, yet another high-quality mixtape to add to an already impressive body of work.

Following the single-production pattern set by Bronson’s other projects like Well Done, Blue Chips was produced entirely by Party Supplies, helping the mixtape feel like something legitimate instead of a bunch of leftovers. The tracks themselves are perfectly suited for Bronson’s gritty, classic New York sound, making even a simple drum-less violin loop sound hard. Party Supplies takes the job seriously, building beats with unexpected changes (“Double Breasted”) and atypical concepts (“Thug Love Story”) that might normally be saved for a retail LP.

Bronson himself treats the project with care as well, spinning extended metaphors out of his usual favorite subjects—food, wrestling, women—in his typical energetic-but-effortless style. Many of the individual songs are shorter freestyles with one or two long verses (“Intercontinental Champion,” “5 Minute Beats 1 Take Raps”) but the in-and-out approach helps keep everything moving along smoothly. He goes long-form when he feels it’s necessary (“9-24-11”) but ultimately leaves you wanting more. Bronson’s style doesn’t vary heavily from verse to verse, but the rhymes are layered with enough complexity to make up the difference (“Tapas”).

There’s a case to be made that the frequent comparisons to Ghostface are a little unfair, but it’s still true that Action Bronson fills the “W” shaped hole in the rap game better than most actual Wu-Tang affiliates have been for the last several years. Either way, Bronson has yet to wear out his welcome even after a flood of releases, so while it’s still possible that he’ll slow down in the future, he hasn’t done it on Blue Chips.