The Most Important Mixtapes Of 2012 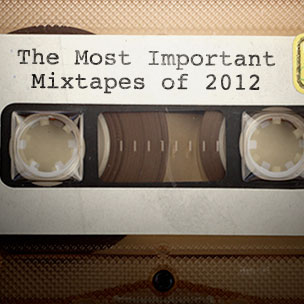 In the advent of a new mixtape era where promotional materials transformed into free albums, many music executives and artists worried that their true money makers and litmus tests, retail albums, would suffer as a result. For better or for worse, HipHopDX’s Top Mixtapes of 2012 list confirms those fears even more than other recent years. Inclusions from this year’s roster of top mixtapes did their duties of showcasing talent and getting fans talking, but many of the artists had trouble using that momentum as a launch pad for further success on their retail efforts. They built trust with their fans, but the romanticized vision of tapes being portals into their “real” albums was debunked. Mississippi rapper/producer Big K.R.I.T. had outproduced many of Rap’s elite with his three universally acclaimed three projects, but reviews of his Def Jam debut weren’t as enthusiastic. Rich Forever secured Rick Ross the crown of MTV’s Hottest MC, but even a press conference with Lyor Cohen couldn’t give his God Forgives, I Don’t album life beyond the summer.

Their careers are still likely intact, but the concept of the retail album as an event is quickly becoming as archaic as the idea of going to a physical store to buy them. The only acts from this year’s collection of Top Mixtapes who didn’t suffer losses were Joey Bada$$ and Showbiz & A.G.: acts whose ages and tactics shield them from immediate repercussions. Bada$$’s debut 1999 sees him paying homage to the era that came before him, while Showbiz & A.G.’s Preloaded sees them adding a free price tag to the same formula they’ve honed for years. Something both acts have in common is willingness to stick to their guns and pace themselves, instead of chasing to keep up with rap’s Joneses. As usual, the fans win either way: they get free, high quality music to fill their iPhones and laptops to score their daily lives. But what’s a victory or two without a championship ring?

Many pretentious teenagers and disgruntled old heads use message boards and comments sections to cry about a lack of “real Hip Hop,” but Joey Bada$$ demonstrates it where it counts: the music. The 17-year-old pairs beats from his Pro Era crew with resurrected instrumentals by legends like J Dilla, MF DOOM and Lord Finesse to recreate the feel of Rap’s “golden era” more successfully on 1999 than some old timers who were actually there. The aura doesn’t stop with the soundbeds, though: songs like his viral breakthrough “Survival Tactics” showcase a unique flow, detailed rhyme schemes and an ability to articulate his ideas that goes beyond his years. Even rap legend Showbiz gave Joey Bada$$ his cosign in a September interview with HipHopDX. The world got an glimpse of him in the BET Hip-Hop Awards Cyphers, and he looks to have a promising career ahead of him.

With K.R.I.T. Wuz Here and Return of 4Eva serving as highlights of 2010 and 2011, 4Eva N a Day was a fitting addition to Big K.R.I.T.’s trilogy of prodigious free releases. In a loosely conceptual disc, the Mississippi youngster continues to revere the legends, culture and home state that raised him while staking his own claim as one of the future’s brightest voices. He enlists live musicians to enhance his soul-drenched backdrops, which back some of his most seasoned lyricism to date on songs like “Handwriting” and “Insomnia,” two of the disc’s many artistic triumphs. He channels legends like Pimp C for slinky odes to poon and candy paint (“Temptation”), and infuses bounce into energetic numbers like “1986” and “4EvaNaDay Theme.” Rap hasn’t been this balanced as a genre in years, but K.R.I.T. does the job as a one-man act.

Before God Forgives, I Don’t and The Black Bar Mitzvah exposed chinks in his armor, Rich Forever displayed Rick Ross as the infallible bawse who ran Rap. Raucous bangers (“High Definition”), scathing hater dismissals like (“Holy Ghost”), and triumphant crew anthems (“MMG The World Is Ours”) made Rich Forever one of the most whip-ready discs of the year. Don’t forget the abundant star power: Diddy, cockier than ever, uses the intro and the album’s halftime mark to pop shit, while Nas reminisced days as an incapable drug dealer on “Triple Beam Dreams.” On “Stay Schemin,” Drake unleashed an alimony-thrashing one-liner that instantly permeated Twitter timelines and memes. Fans wondered how the Maybach Music sultan could afford to give away so many gems on a free download when he had a retail disc on the brink, and surely enough, GFID kept two of Rich Forever’s highlights as bonus tracks.

Regardless of its legends’ revered catalogs and influential career trajectories, Hip Hop is a “what have you done for me lately” type of game; great records from past decades are worthless if your last album sucked. With Preloaded, Showbiz & A.G. show that they’re just as potent as they were during their heyday of running New York in the ’90s. “That Nigga Crazy” tackles self-hate and bad influences that plague the inner cities, “Wolves” enlists fellow D.I.T.C. member O.C. for conceptual wordplay, and DJ Premier contributes his signature scratches to the aptly-titled “South Bronx Shit.” The duo celebrates friendship and success and “Berri Love,” and cements their partnership with “The Bond,” which ends the disc. A.G.’s pragmatic rhymes and Show’s crate-digging are two decades in, and they haven’t lost a step.

With hits like “I’m A Boss,” “Tupac Back” and “House Party” permeating dance floors and radio waves, Meek Mill’s buzz was at a fever pitch: his DJ Drama-hosted Dreamchasers 2 mixtape crashed DatPiff’s servers, netting nearly two million downloads within 24 hours. On DC2, Meek kept the hits coming: “Amen” saw him and Drake spitting blasphemous bars between one of the year’s catchiest hooks, while “Lean Wit It” and “Flexing” continued his winning streak of club bangers. He also showed the unfiltered rhyming ability that impressed listeners of his previous mixtape: “Ready Or Not” sees him deftly navigating a Fugees sample, “Burn” teams him with Big Sean for a drill of verbal calisthenics, and “A1 Everything” serves as a playground for him and Kendrick Lamar to experiment varying flows.