The Most Important News Stories Of 2012 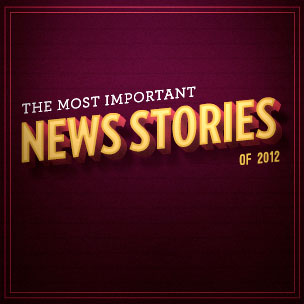 In a musical genre where headlines seem to be created nearly every day, there’s usually no shortage of newsworthy material in Hip Hop and the year 2012 was no different. With each calendar year, the Hip Hop world seems to sprout news stories that are an intriguing array of the shocking, predictable and, at times, inspirational. This year, fans of Hip Hop and those directly involved in the genre seemed to do a little reevaluating following the death of a teen rapper in Chicago and the way in which his death was mocked via social networking by up and coming rapper Chief Keef. And only months prior, a holographic Tupac at Coachella served as a captivating example of the unparalleled power of Hip Hop.

From Shyne picking fights with everyone to Frank Ocean’s gutsy open letter and all the unexpected Gunplay madness in between, HipHopDX picked the Top 10 News Stories of 2012.

Chief Keef Laughs At Death Of Fellow Rapper, Says He Was Hacked

Teen rapper Chief Keef quickly worked his way from viral sensation to mainstream buzzmaker thanks to his record “I Don’t Like” and its accompanying video, but the Chi-Town spitter rapidly found himself among Hip Hop’s most notorious following remarks he made via Twitter in regards to the death of fellow Chicago rapper Joseph “JoJo” Coleman. “HahahahahhahahahahahahahaahhAAHAHAHAHA #RichNiggaShit,” Keef Tweeted back in September. “Its Sad Cuz Dat Nigga Jojo Wanted To Be Jus Like Us #LMAO.”

Keef’s Twitter taunts eventually found the Interscope Records signee under investigation by local authorities. The rapper later claimed that his Twitter account had been hacked and offered up his prayers to JoJo’s family.

All it took was a subliminal shot at the Jay-Z and Kanye West pairing – better known as The Throne – to reawaken the squabble between rappers Hov and Weezy. During a Cash Money Grammy party in February, Weezy added fuel to the lyrical fire as he rapped, “I met a bad red bone, I took the bitch home/ I asked her what she want to watch, she said surely not The Throne.” But by the time the 2012 BET Awards rolled around in July things again seemed kosher between both the G.O.O.D. Music and Young Money camps as Kanye West, Big Sean, Baby, Nicki Minaj and Tyga were all able to coexist during the taping of the awards show at the Shrine Auditorium.

Issues between the G.O.O.D. Music and Young Money camps were again reawakened with the release of Pusha T’s record “Exodus 23:1.” The Clipse emcee seemed to take aim at Drake as he rapped, “Contract all fucked / Explain up I guess that means you all fucked up / You signed to one nigga that signed to another nigga that’s signed to three niggas / Now that’s bad luck.” While Drake remained relatively silent, Young Money founder Lil Wayne immediately fired back in a not so subliminal way as he warned, “Fuk pusha t and anybody that love em,” in a post made via Twitter. Weezy also responded to Pusha T’s record with a diss track of his own titled “Goulish.”

Pusha T would later reveal in an interview with Booska-P.com that he had no “personal beef” with Lil Wayne or any of the artists signed to Young Money and that he was instead focused on making “good music” with the release of “Exodus 23:1.”

In May of this year, nearly two years after turning himself in to authorities at a Harlem police station, former Bad Boy artist G. Dep was sentenced to a minimum of 15 years by Manhattan Supreme Court Justice Michael Obus. Back in December 2010, the Harlem rapper walked into New York City’s 25th precinct and confessed to robbing and murdering a man in 1993. Although G-Dep now faces 15-years-to-life, he described his conviction as being “the end of a nightmare” in a recent interview with New York magazine and also shared that he was “happy” to have received his long-awaited sentence

The month of October wasn’t all too kind to Maybach Music Group artist and Triple C’s member Gunplay. At the start of the month, footage was released showing the Miami-based rapper being jumped by what was allegedly members of 50 Cent’s entourage. While this footage may have taken a brief swipe at the rapper’s pride, footage released later in the month of Gunplay would land the rapper in a hefty amount of legal trouble. In the video, which was released by gossip powerhouse TMZ, Gunplay is seen pulling a gun on a man who is said to have been his accountant.

Prior to the video being released, Gunplay turned himself in to police and subsequently missed a scheduled performance at Atlanta’s A3C Hip Hop Festival. The MMG spitter was released from jail on $150,000 bond and is currently on house arrest until he faces his armed robbery and assault charges during trial.

Following a slew of malicious comments made via Twitter and even a diss record or two, noted Queensbridge duo Mobb Deep finally called it quits earlier in the year to the surprise of many fans of The Infamous architects. When Havoc claimed that a series of anger-fueled Tweets made from his Twitter account aimed at Prodigy were due to a hacker, things between the duo again seemed kosher, but the relationship between the two rhymeslingers would soon unravel into finality when Havoc revealed that Mobb Deep was on “hiatus indefinitely.”

Despite appearances from the likes of A$AP Rocky, Childish Gambino and Frank Ocean, the highlight of the 2012 Coachella Valley Music And Arts Festival came courtesy of the late Tupac Shakur. The iconic rapper seemed to be brought back to life momentarily thanks to a $100,000 hologram created by Hollywood-based studio Digital Domain. Alongside Snoop Dogg and Dr. Dre, the shirtless Tupac hologram went on to perform “Hail Mary” and “2 Of Amerikaz Most Wanted” much to the delight of festival attendees and live stream viewers. Although the Tupac hologram was easily worth at least a few weeks of water cooler chatter, the popularity of the hologram didn’t keep its creators from filing bankruptcy in September.

It merely took a few words for the firestorm between HOT 97 personality Peter Rosenberg and Nicki Minaj to erupt. And once it did, it took the beef, which Spin magazine referred to as “The Worst Beef Ever,” ample time to cool down. Following Rosenberg’s comments made at Summer Jam’s smaller outdoor stage which included a “fuck that bullshit” aimed at Minaj’s music, the rapstress was quickly yanked from what was to be her first headlining performance at the annual festival.

And the Summer Jam soiree of course couldn’t conclude without an infamous rant from HOT 97 mainstay Funkmaster Flex who didn’t hesitate in expressing his distaste for “commercial rappers.” Flex’s comments eventually led to an on-air phone interview between himself and Minaj which proved to be more entertaining than problem-solving.

Frank Ocean (Sort Of) Comes Out In Open Letter

In a letter originally penned as the liner notes for his debut album, Channel Orange, Odd Future crooner Frank Ocean shocked music fans when he revealed that he once fell in love with another man. In his candid letter, Ocean never referred to himself as being bi-sexual or gay but his words opened the doors to an open discussion on music and homosexuality, particularly in the genres of Hip Hop and R&B.

In a recent feature with GQ magazine, Ocean spoke on his letter and revealed how elated he was after addressing his sexuality. “All the receptors were now receiving a different signal, and I was happy. I hadn’t been happy in so long. I’ve been sad again since, but it’s a totally different take on sad. There’s just some magic in truth and honesty and openness,” the singer shared.

After being pictured with Diddy at Paris Fashion Week at the top of the year, it seemed as if former Bad Boy artist Shyne had finally put his differences with his former boss behind him. As it turns out, it was only a matter of months before Shyne was again on the offense, referring to Diddy as “a rat” and even dropping the diss record “You’re Welcome.” Shyne’s feud with Diddy may have eventually fizzled out, but in its place were spats with 50 Cent and even Maybach Music head honcho Rick Ross.

Most recently, Shyne took aim at Compton rapper Kendrick Lamar, referring to his major label debut good kid, m.A.A.d city as “trash.” And while Kendrick didn’t seem too keen on a feud with Shyne, fellow West Coast emcee Game quickly took up for the TDE rapper and immediately proceeded to trade jabs with Shyne via Twitter and through diss records.