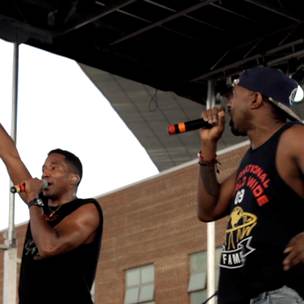 There is nothing like an out-of-body Hip Hop show experience. As jaded as any veteran of this culture (or industry) can get, those moments that send chills kill whatever fronts we put up and doubts that may have manifested in our love of this culture. I can recall seeing a late 1990s Talib Kweli spit the lyrics to “The Manifesto” at Pittsburgh’s Club Laga and getting chills. I remember watching D.I.T.C. unexpectedly swarm the stage for freestyles at the Zulu Nation 30th Anniversary show in New York’s S.O.B.’s and going numb with awe. Or seeing Jay-Z at Rock The Bells 2008’s New York stop, perform my favorite post-Black Album  track, “Success”

with Nas. Just like any fan, I could go on and on. These moments are personal to each of us, and as we get older in Hip Hop, they pull it back to those “first time I heard…” moments of excitement and promise. I would not be working in this industry or for this website if I didn’t live for that high.

For the past three years, the greatest source of these feelings about Hip Hop for me have come during Brooklyn Hip-Hop Festivals.

With the stage always facing the Manhattan skyline and the audience watching from underneath the Brooklyn Bridge, these grassroots events produced by the Brooklyn Bodega have gotten bigger in each of the last seven years. But as growth has come, the authenticity and purpose has remained strong – a positive event to celebrate Hip Hop’s roots and embrace its future. While festivals have become commonplace, to see Homeboy Sandman and Kanye West share the same stage on a given afternoon is crucial to believing that skills level a playing field, and good music rises to the top.

Kanye West And Q-Tip Perform Together In Brooklyn

It was interesting to be backstage on Saturday’s fest. Towards the end of the day-long affair, I thought that I had seen it all – the emerging star in the crisp stage performance of Kendrick Lamar, the ageless energy in M.O.P., the trademark apathy of Sean Price, and of course the premiere showmanship of Q-Tip. Talking with a fellow DX contributor, BKHHF staffer and friend Justin Hunte, we shared the same smiles and exuberance that we’ve shared annually at these events; it’s an exciting time to be a Hip Hop fan. I looked over his shoulder to see Kanye West, hat to the back, just standing there enjoying the show as well. Naturally, folks continued to approach the superstar for pictures, interviews, card-passing, etc. According to Justin, West kept telling folks to just enjoy the show – as they were missing the magic of Q-Tip (and Black Thought/J. Period‘s) performance. How real is that?

If that’s true, West was right. I can honestly say that in the wake of all this Beats, Rhymes & Life controversy, my personal excitement level for a Q-Tip solo show was compromised. I’ve seen A Tribe Called Quest perform countless times, and I presumed a challenge facing The Abstract in dealing with his catalog without Phife beside him. Instead, Tip bounced back in a major way. With a seamlessly-produced show, Q-Tip made an argument for being an emcee with the most hits in his arsenal. From early to late, obscure to otherwise, the Queens emcee-producer seemed more enthusiastic than I’ve seen him in years in delivering the joints. And with support from his many friends – including Ali Shaheed Muhammad (in attendance) – as well as Michael Rapaport, Q-Tip answers so many questions in our minds, just by moving forward.

Equally important is M.O.P. The highlight of my show-going experience this year was Mash Out Posse’s performance. I had heard rumors in recent years that the pair of Billy Danz and Lil Fame were not in good shape physically. The duo rarely performed anymore, and the wear and tear of being rugged neva smoove had taken its toll on one of my favorite group’s in Hip Hop history. If that was anywhere near the truth, M.O.P. demands to be saluted. Few stage-shows have as much energy as seeing Bill and Fame in front of their hometown fans. The crowd energy was volcanic to watch the pair play “Ante Up”

, as well as early Select Records-days hits from their extensive catalog. Just as the BKHHF has always maintained a patriotic feel to BK – with performances by Boot Camp Clik, Jeru The Damaja and one of the borough’s greatest stars – Big Daddy Kane, M.O.P. deserved their moment. If the group’s performing energy is any indication of their maintained chemistry, this forthcoming album will live up to the expectations laid out in the group’s 20-year career. The group that coined the expression “salute” for me gets my greatest finger-to-forehead symbol of respect.

The Importance Of The Hip Hop Show In 2011

The Hip Hop live show is both as important and as overlooked as ever. Look at three of 2011’s biggest winners – Tech N9ne, Atmosphere and Wiz Khalifa. All three of these acts have toured restlessly for years, directly engaging with their fans in city-after-city, night-after-night. The dividends of this hard work shows in the numbers – when loyal fans ignore illegal downloading to show support and push their artists towards the top of the charts. Still, how many tours barely break even, if at all? Part of the blame can be handed to how lazy shows got for a while – I remember leaving GZA‘s Liquid Swords show in 2008 and telling myself that I was going to chill on shows for a bit. When I leave events like the Brooklyn Hip-Hop Festival, I start reading my City Paper and circling upcoming shows again, ready to buy tickets in support – G-Side, X.V., Tanya Morgan all in the horizons. That out-of-body experience makes me a consumer again, and excited to connect with people who love this culture like I love it.

As I don’t often write reactions to shows anymore, I’d like to close by honoring the Brooklyn Bodega. BB’s founder and president Wes Jackson was somebody I first heard of-then-met through putting out independent Hip Hop gems, like J-Live‘s The Best Part (classic) album on his 7Heads Records. His PR/Marketing company in Room Service (and its amazing staff) granted me my first interview with Gang Starr, Brand Nubian, Rhymefest and countless others. Always Brooklyn-based, Jackson’s many works have always celebrated Hip Hop and the independent spirit. In those days, I remember talking with Wes one night in 2004. He told me that in chasing his dream, he nearly lost it all, “I ate potato chip dinners so I could keep the phones on. If I had the phones working, I could still make moves,” he said. In my own pursuits over the last decade, that’s a quote I’ll never forget and recite often. Congratulations to Wes Jackson and the Brooklyn Bodega – you’ve made moves that have moved the culture forward. Tremendous thanks to Pamela Bishop, Justin Hunte, Kelli Jones, Dominique, Marilyn and all of the Brooklyn Bodega for the hospitality, support and inspiration.