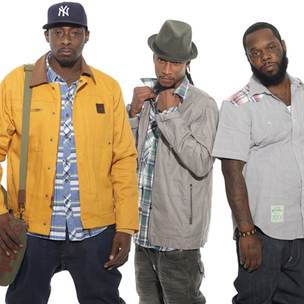 You can’t talk about the golden era of Hip Hop without mentioning the Brooklyn duo known as Smif-n-Wessun. They have been one of the biggest names in hardcore Hip Hop since their debut appearance on Black Moon’s classic first album, 1993’s Enta Da Stage. Not many artists can say they have a debut that’s widely considered a classic but, with the release of their first album, Dah Shinin’, Steele and Tek have earned that nod as well as solidified their place among Brooklyn’s long line of legendary emcees.

After almost 20 years in the game, Smif-n-Wessun will be releasing Monumental this Tuesday, June 28. The project is the not only their fifth album but the first project they’ve worked on with legendary super producer the Chocolate Boy Wonder a/k/a Pete Rock. With features from Sean Price, Rock, Styles P, Raekwon, Bun B, Memphis Bleek, Freeway, Buckshot, and Black Rob. As the pair becomes a trio this time, and shows a new side, HipHopDX spoke to all three about slow-cooked greatness and monumental career milestones.

HipHopDX:The new album, Monumental, is your fifth. What was the inspiration for doing this album?

Tek: The album was inspired by everything around us: the good, the bad, the ugly – everything. It really just builds on what we started [16] years ago with Dah Shinin’.

DX: Last we spoke was 2007, around the time your last album was released. What have you guys been up to outside of working on this project?

Tek: Traveling. Doing spot dates here and there and also running our independent companies [such as Bucktown USA]. Working with independent artists.

DX: A lot of veterans say they get more love overseas than they do in the states. What’s the biggest difference between American fans and the fans overseas?

General Steele: [Overseas], they still embrace the entire culture. It’s not just about who has the hot song or the hot dance right now. The still do graffiti, they breakdance, they do all that. Over here people are kind of used to it because we’ve had it for so long but they still treat everything like it’s new.

DX: The new album, Monumental is produced entirely by Pete Rock. You guys came up in the same era so what took so long for you to work on a project together?

General Steele: Most artists have like a three-year period between albums. You have to record the album, then go out on tour to promote the album. It takes up a lot of time. Especially when you have two popular artists like us and Pete Rock. And on top of that he’s not only an artist but he’s also producing and [deejaying], so trying to get those schedules together is crazy. But we made it happen the best way were able to make it happen and I’m very happy with how things came out.

DX: What was it like working with Pete Rock?

General Steele: Just like when you first start working with anyone the first few sessions was kind of a feeling out process. We got to know each other a little bit and once the vibe was there we were like family.

DX: What did you do to break the ice and get the flow going?

General Steele: When you got a producer like Pete Rock because he’s not going to just give you a whole CD full of beats. He’ll do two beats and give them to you and say, “Here, take these and let me see what you can do with these before I do anything else.” But we’re Smif-N-Wessun, so you give us something we do our thing and get right back at you. So we did that a couple times and after we both warmed up to each other’s vibe then we got to work and made it happen. This album was slow cooked and because of that everything blended well.

DX: Was it a collaborative effort in crafting the sound or did you just leave it in Pete’s hands?

General Steele: It was totally collaborative from the start. We don’t play with our craft at all. Everything we do we want it to be the best outcome it can possibly be.

DX: Smif-N-Wessun, you’ve been part of some monumental collabs over the course of your careers. One in particular I wanted to ask about was the One Nation the late 2Pac was working on. How’d y’all manage to link up and what became of the album?

General Steele: That project was a blessing. Anybody who bought Dah Shinin’ and read the “Thank you’s,” ’cause if you’re a real fan you read the thank you’s, who produces what, and all that. But if you look at the notes on that album there’s a strong shout of support to Tupac. A lot of people don’t know that The Outlawz were based in New Jersey. Jersey and New York are right next to each other, so long story short, we got to link up with ‘Pac on the strength of the love we was sending out. Based on that, ‘Pac ended up reaching out to us for this thing he was doing. The project was called One Nation. ‘Pac was trying to unify Hip Hop into one nation. All the drama and the beefs and all that at that point was getting out of hand so he was reaching out to cats he felt could help keep this alive.

DX: As an artist and a lover of Hip Hop how did you feel when, out of any artists in the world, he reached out to you guys?

General Steele: Honestly, it’s still something I trying to come to grips with. Like sometimes I have to ask did it really happen. It was in the middle of the alleged east coast/west coast war. Here we are cats from Brooklyn (a/k/a) Bucktown, U.S.A. dead smack in the middle of Cali. We step off the plane and next thing you know we’re in front off the bosses out there. We come in and there’s Snoop Dogg and Tha Dogg Pound and all of them. Snoop sees Buckshot

and shows him love like he was his nephew at a family reunion or some shit. And I’m a Brooklyn cat to the heart – Brooklyn to the fullest so when I saw that i was a little confused. I’m like here’s this supposed war going on and these cats are showing us love. How could I not be a part of something like this? How could I dare disrespect what was being done for Hip Hop?

DX: What was your fondest memory from that experience?

General Steele: We spent time with the homie – like real time with the homie like in his crib eating breakfast : eggs, turkey bacon, and flap-jacks. He showed us nothing but love even though he was from a different culture. Well, supposed to be from a different culture even though he was born in New York. It was good for Smif-N-Wessun, Buckshot, and all of Duck Down [Records] to be a part of what he was trying to do. He was like the Rap Bob Marley. He’ll live forever through what he’s done and what he was trying to do so how could we not be a part of that.

DX: Speaking of showing love, you guys have always made it a point to show love to new producers and new artists. Is that something you feel Hip Hop is lacking these day?

General Steele: You earn love by growing as an emcee. It should be a constant evolution. You should be constantly growing. You can check our history. We always showed love to cats. I wish everyone would’ve been showing love like us because over the years Hip Hop has taken a big hit. But now you see more cats out here doing it. I mean look at [Cam’ron] and Vado [in Gunz N’ Butta]. Cam has his own history and Vado was on the come up and Cam kind of took him under his wing and kind of gave Vado the co-sign that helped him get where he’s at now. If you got cats out here who have a love and respect for it and they’re out here doing their thing then support them.

DX: The album is called Monumental. Pete, Smif-N-Wessun, what are some points in your careers you feel were monumental?

Pete Rock: For me, the monumental moments were working with certain people: Run-DMC, Public Enemy, House of Pain, EPMD… These are guys who I used to run to the record store and buy their record son as it came out and now I’m here working with them. For me that was a big thing in my life. I still think back on it and I have to stop and be like damn. It’s unbelievable, bro. I remember when I started working with Run-DMC, the album Back From Hell hadn’t done so good. [Jam Master] Jay was very adamant about finishing the song because he wanted to hurry up and get it to Lyor [Cohen] and Russell [Simmons] because we had to prove to cats that didn’t believe in Pete Rock that I was the one that could help bring Run-DMC over the top. And the song [“Down With The King”

] hit number one with a bullet. I still have the Billboard magazine.

General Steele: I can’t top that. [Laughs]That was a milestone and a half that he just said. But for me it was being on stage with Rakim.  Being on stage with Rakim and seeing Rakim in person. There’s not a place for words to describe that. Seeing him on stage is amazing. You got Rakim on stage, DJ Premier on his right side and Psycho Les on the other side. I don’t know if I’m supposed to be here or am I tripping right now. Moments like that make you truly thankful and truly appreciate what we do and why we do it.