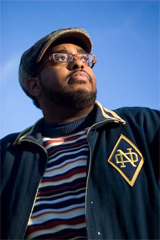 In the early 2000s, J-Live was stride-for-stride with Black Star and Common in bringing the early classic Hip Hop components out to combat the mainstream. Thanks to a different plateau of labels, and maybe an endorsement or two, Justice Allah remains comfortable in the independent marketplace while his peers soared onto mainstream success.

The last five years have not helped matters. Whereas 2001’s The Best Part and 2002’s All Of The Above appeared to be as strong as an opening pair of albums as any contemporary emcee could possibly deliver, a jumbled handful of EPs and jumbled Penalty Records‘ return to the game, 2005’s The Hereafter weren’t in line. Returning to Brooklyn after a stint living in Philadelphia, J-Live isn’t quick to admit that any of the last five years were professionally taxing. Instead, within the complex verses, the emcee, deejay and producer chronicles a divorce, financial struggles and a renewed vow to his craft on Then What Happened? [click to read].

Listeners can find out what actually transpired in J-Live‘s life in the last three moons. What J-Live tells HipHopDX is that he was aware of criticism, to a point. Fresh off of a personally-touching South African tour, gearing up for domestic spot dates and a high-praised album finding new fans, Justice prevails.