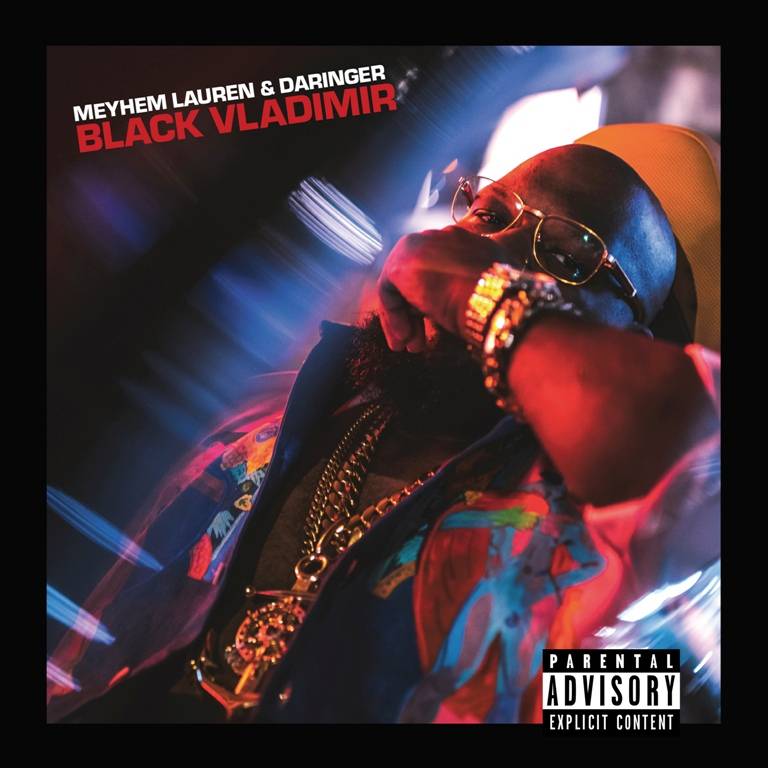 Meyhem Lauren seems to have found his sweet spot. In the past, the Queens native has flaunted all the right elements to be a purveyor of classic New York knuckle sandwich rap — a booming baritone, cypher-tested flow and deep bench of like-minded collaborators — but not every punch has landed. He’s talented and wildly prolific, so finding the many jewels in his sprawling discography isn’t tough; listeners just have to sift through some dull moments to get there.

Meyhem’s often struggled to synthesize his influences into something new; his blood-soaked crime tales and lavish mafioso indulgences continue the lineage of Kool G Rap, AZ and Big Pun, but he hasn’t been able to do much to improve upon their blueprints. And though he’s a gourmand like his perennial rhyme partner Action Bronson, the food bars he peppers in don’t always convey the same burst of flavor.

But on Black Vladimir, Meyhem’s new collaboration with Griselda nouveau-bap maestro Daringer, the pieces click into place like never before. Meyhem is no stranger to one-producer projects, having released multiple albums and EPs with DJ Muggs and Harry Fraud. This is the first that feels fully symbiotic. Daringer’s production finds the compromise between the trudging, noisy psychedelia DJ Muggs creates and Harry Fraud’s detached dab pen zone outs. His beats are immersive but never overwhelming, leaving enough space for Meyhem to deeply explore his writing. Simply put, the two sound comfortable together.

Previous Meyhem records often kept the listeners at a remove. Though he delivered the vivid details of his crime lord exploits with a deadly serious tone, they rarely felt totally lived in. A line such as “gold bars stashed in appliances” (from Gems from the Equinox highlight “Street Religion”) carries the cinematic thrill of a good heist movie but feels too clean to be real. Black Vladimir finds Meyhem balancing those widescreen Scorsese-isms with a focus on the minute.

On “Ridin’ Dirty,” he pairs talk of flying to Aspen on a whim with seeing a “stripper snort the color off a Jackson.” He boasts that it’s “easy to fit a milli in hundreds inside a duffel” on “Nigerian Vegetables,” knowledge he’s gained from “holding hammers [and] scraping plates.” Those same hands that have the muscle memory of counting cash and cutting coke lines are now used for “shaving truffles.” This more evocative writing makes his outlandish boasts seem more believable. When he claims on “Trigger Point Therapy” to have “35 strippers named Bella in [his] contacts,” or that his “closet’s like a down payment on a duplex” on “Lavish Vision,” it seems to come from a place of authority.

Meyhem also leans a bit further into the technical craft of rapping throughout the album. At times, he seems almost playful, gleefully stringing together long threads of alliteration or internal rhymes. Though “Red Pesto” features a typically proficient Conway The Machine verse, Meyhem steals the show with slinking lines such as “precise projection pistol pointing at your tooth” and “Black Benjamin Button be stuntin in something/Bouncing in the Bentley while doing donuts on Sutphin.”

A shining moment on “Valedictorians” marries his braggadocio, taste for exclusive menu items and sheer rapping ability with the lines: “I might drop four stacks in Petrossian/Addicted to the sturgeon like a surgeon shooting opium.” Meyhem’s more present than usual, simultaneously drawing listeners further into his world while allowing himself to stretch into the beats in ways he hadn’t before.

It’s a credit to Daringer’s careful, hypnotic production that Meyhem feels so much looser than on previous projects. He crafts beats with a restrained hand, letting simple melodic figures and bare bones loops announce themselves without becoming overbearing. He’s especially adept at creating a mood; lush samples of Rhodes piano and twanging psych guitar turn cold and menacing, bolstered by heavy drums that sound like they were recorded in a coffin.

A big part of what makes Daringer’s production on Black Vladimir so magnetic is his ability to put rhythms at play with each other. His beats create spaces for Meyhem to reach beyond his usual pockets and patterns, to figure out new ways to weave into the subtle rhythmic complexity. The syncopated harpsichord loop of “Top Grain Leather” and twinkling piano in the second half of “Trigger Point Therapy” dance in between the straight-ahead drums, while the arpeggiated guitar in “Lavish Vision” makes the lumbering percussion a little lighter on its feet. In response, Meyhem sounds challenged and invigorated.

However, it’s not a total home run. Like most Meyhem projects, it could use the guiding hand of an editor. The bombastic “Black Pinot” opens the album with a bang, as Meyhem describes “sipping black pinot made by a lady with a missing limb,” while Action Bronson understands the fractals he sees in the mirror to be his reflection. The next two songs, “Broken Rubberbands” and “Airplane Mode 4:12,” run in place, sapping the momentum just a bit. Once “Conflict Resolution” starts, the album begins to regain its footing, finding a stride that propels the back half into one of the best ‘90s noir rap homages in recent memory.

Meyhem’s music isn’t as ceaselessly bleak as some of the peak Griselda stuff, and the album sags when he trades his sense of humor in favor of outright grittiness. These moments are thankfully rare. The majority of Black Vladimir feels organic, as if a collaboration between the two was inevitable. It continues Daringer’s excellent run of menacing boom bap and lets Meyhem finally step comfortably into the best version of his sound.