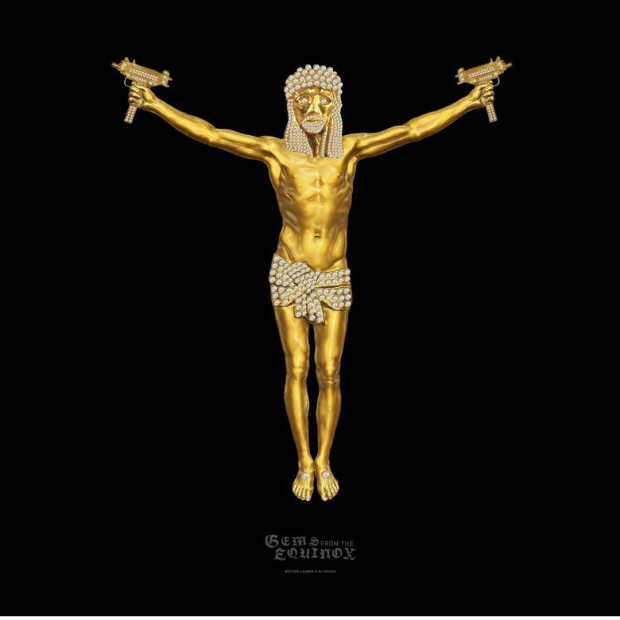 Although Meyhem Lauren is best known in broader mainstream circles as Action Bronson’s affable co-host on VICELAND’s Fuck, That’s Delicious, the Queens-based MC boasts a robust rhyming pedigree honed and refined over the course of four albums, a stack of EPs and countless features. He’s traded verses with underground luminaries such as Roc Marciano, Sean Price and Inspectah Deck, and blessed beats by the likes of Alchemist, Large Professor and Buckwild.

Yet there’s still a nagging sense the rhyming gourmand and one-time affiliate of notorious Polo Ralph Lauren-promoting crew The Lo-Lifes remains an unknown force beyond his home turf of New York.

On Gems From The Equinox, Laurenovitch enlists DJ Muggs — the veteran producer who rose to prominence in the ‘90s as part of Grammy-nominated trio Cypress Hill — to craft the album’s sound. Lauren and Muggs first linked up back in 2012 during the recording sessions of Bronson’s Alchemist-produced tape Rare Chandeliers, and Muggs later supplied two tracks for Lauren’s 2016 album Piatto D’Oro — “Live Ginger” and the LP’s penultimate cut “Elevation.”

Although Muggs’ Soul Assassins clique was emblematic of the multicultural left coast rap scene in the ‘90s, the producer’s original pre-fame roots actually lie in New York. So it’s not shocking that Muggs, who has remained relatively under the radar for much of the 2010s, delves deep into the five borough’s celebrated sound for much of his sonic inspiration here.

As the album begins, we find Lauren posted up on those sprawling Big Apple blocks, describing how he’s “moving unpredictably” as a back-breaking, slo-mo drum beat crashes into a huge wall of distorted static and feedback. It establishes an ominous tone from the start, as the burly Polo-clad protagonist reps for his hometown and describes how his story is untold — acknowledging his cult hero status in today’s rap game.

Whether he’s cooking up something marvelous to get your mouth watering, dabbling in a bit of ultraviolence or simply rapping about vintage luxury garments, Lauren’s lyrics often blend a dry, dark humor with an absurd appreciation of life that places him a notch or two above your average East Coast subterranean spitter.

“I’ll kill you with a block of ice and melt the evidence,” he deftly jabs on the supreme “Hashashin,” which boasts an impressive guest verse from Shady Records signee Conway The Machine. Similarly on “Szechuan Peppercorns,” Lauren, his brother Hologram and Bronson drop amusing avant-garde lines that reference their sneaker game, herpes-dipped razor blades, Japanese lawyers’ eating habits and, well, Steven Seagal.

Staying with the album’s features, the stellar supporting cast forms like an underworld rhyming conglomerate. Roc Marciano — New York rap’s de facto modern day godfather — drops a flurry of ice-cold quotables on “Street Religion” (“Stare death in the eyes, never once flinched/ Cocked the hammer on the gun, left a thumbprint” and “Leave your thoughts on the sidewalk for that fly talk”) as Muggs resurrects the ghostly instrumental to Outkast’s “Two Dope Boyz (In A Cadillac)” to maintain the gritty vibe.

Hologram and Benny The Butcher shine on the skeletal “War Drums,” while rap renegade Mr. Muthafuckin’ eXquire and the late Sean Price light up the brilliantly off-kilter “Aquatic Violence.” B-Real’s verse on closing track “Tension” is a neat touch that recalls the Cypress Hill days without sounding out-of-step with the rest of the album.

Sonically, Muggs engineers a jagged and discordant collage of dusty drum beats, eerie horror movie strings and grimy guitar stabs. At times, it feels like a 21st century reboot of his trademark “blunted funk” production style that propelled Cypress Hill to the top of rap game almost a quarter-century ago. On the epic “Shea Stadium,” Muggs underpins a haunting strangulated vocal scream to a cavernous haymaker beat, providing a richer, more cinematic flavor to Lauren and Bronson’s verbal sparring.

Unfortunately, the album doesn’t offer any breezy respite from the prevailing musical murkiness that might have added greater depth to the proceedings, dampening its spark on a couple of occasions. On “151,” which represents a mid-album slump, there’s a sense that Meyhem and Muggs are going through the motions and revisiting ground already covered elsewhere in the album. With an over-processed guitar and a too-slow tempo, the envisaged industrial gray-sky vibe fails to chime with the pulse-racing excitement elsewhere in the album, and the track falls flat.

Similarly, the skits, which lay out Lauren’s street science over a recurring old-time doo-wop sample, feel surplus to requirements and quickly outstay their welcome. Such a misstep suggests that Meyhem’s wise-cracking hard-rock persona packs a more impressive punch in verse form rather than spoken word interludes.

Minor complaints aside, Gems From The Equinox is a well-executed set with Lauren and Muggs making a potent partnership. Like much of  Lauren’s catalog, the album wears its ’90s heritage proudly, but with Muggs offering a revitalized sound the duo swerves the dead-end throwback revivalism that can hamper other artists operating in NYC’s often overly-serious underground sphere.

By placing Meyhem’s jocular wit and deadpan observations of the Big Apple’s underbelly to the fore, the album instead offers a spirited and persuasive case for a certain brand of uncompromising street-hop.