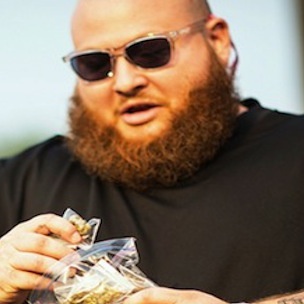 “MAKE SURE YOU CATCH UP WITH EVERY *FUCK, THATS DELICIOUS! AS WE READY FOR ITS TELEVISION DEBUT 3-3-16 ON @VICELAND,” the rapper wrote on Twitter yesterday (January 10).

Action Bronson’s tweet about Fuck, That’s Delicious now having an air date is as follows:

MAKE SURE YOU CATCH UP WITH EVERY *FUCK, THATS DELICIOUS! AS WE READY FOR ITS TELEVISION DEBUT 3-3-16 ON @VICELAND https://t.co/5l6cecfAKI

(The original post in this thread was published February 17, 2015. It is as follows.)

Action Bronson’s “Fuck, That’s Delicious” web series will soon find a new home on cable television, according to the Queens, New York rapper. Bronson shared the news when asked about the possibility of a second season of the show, during an interview with HotNewHipHop.

“Second season, it’s already locked in,” Action Bronson said, according to HotNewHipHop. “We’re gunna be…we’re gunna be on cable. We’re gunna be on a network this coming season. There’ll still be things on the internet but you can watch me on TV now.”

The rapper didn’t reveal the cable network “Fuck, That’s Delicious” will be featured on. Vice currently airs their “Vice” documentary TV-series on HBO.

In addition to speaking on “Fuck, That’s Delicious,” Bronson also addressed his upcoming album, Mr. Wonderful. He detailed his reason behind choosing Mr. Wonderful as a title and going with the Bloodsport-inspired cover art.

“Mr. Wonderful came about honestly from—like I said, from my mother and when I would act up,” he said. “It’s kind of a tongue-and-cheek type of thing. ‘Oh yeah, Mr. Wonderful. This fuckin’ guy.’ You know what I mean? That’s really where it comes from. Just me being bashful. And also, just look at me…I’m just a quiet storm waiting to fuckin’ burst. My whole life is like when Chun Li threw the shit in his eye. He rubbed it in his eye and he had to fight blind. That’s my whole life. But somehow you come out on top, you know?”

Action Bronson’s Mr. Wonderful is scheduled to be released on March 24.