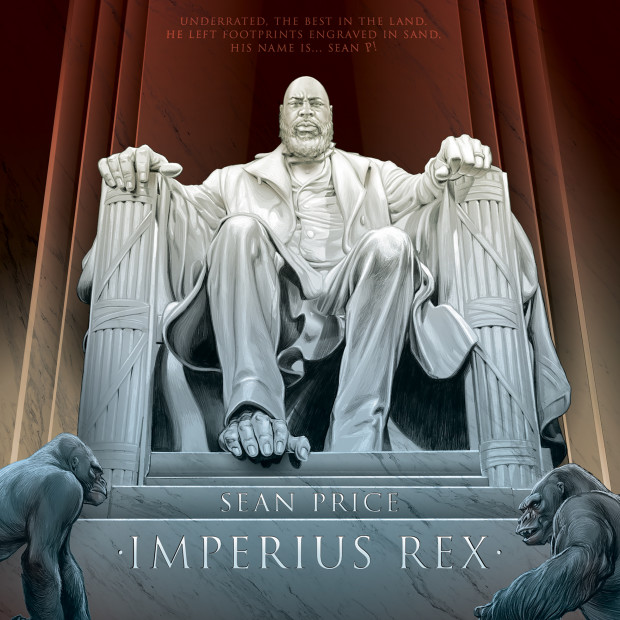 It’s been said that cynicism is the humor of hatred, and during his 20 years in the rap industry, Sean Price’s raison d’être was being one of the genre’s most trenchant misanthropes. (Hence his original moniker “Ruck The Irrational”). He could spit hard on the mic and in your food, yet you’d likely remain be entertained and forgive him for his unrelenting candor and vivid metaphors.

According to his wife, Sean was four tracks into recording Imperius Rex before his death, and she assisted in the completion of the album’s featured guests. Beat contributions come from top-tier producers including Alchemist, Harry Fraud and Nottz.

The title track sets off the album with Sean’s daughter, Shaun, momentarily corrupting her 9-year-old innocence by channeling her father’s spirit for a multi-syllabic rhyme filled with profanity. Price’s unhurried alliteration over the slow-pitched wobbly wah-wah guitar loop from Gwen McCrae’s frequently sampled “90% of You” sets the tone for the album.

Much of the production on Imperius Rex offers the feel of a quintessentially ’90s Boot Camp Clik album, with Timberland-stomping bass drum kicks, push-up adrenalizing snare chops, and criminology and gunplay-filled lyrics with codified references to the Brooklyn crew’s Jamaican acculturation and Islamic faith. The second track, “Dead Or Alive,” dives right into trunk-rattling bass and eerie piano keys with Bernadette delivering a stellar hook.

As with his previous work, the “Don’t say shit to Ruck” mantra remains the theme on this project. Sean’s gruff baritone, wry diatribes (“You being my friend is asinine, assi-ten, ass-eleven”), cheapskate apathy (“This is my slot, rookie/ Your snot box get rocked over Hydrox cookies/ Slapbox niggas/ Free can of soda with the snack box, nigga”), and the love for his longtime partner (“Knowledge my wisdom/ See me with Bernadette, you must acknowledge my wisdom”) are all blazing along at full speed.

Others include “Apex In His Apex” with Rustee Juxx, and the thumping acoustic bassline loop and brassy horns of “Rap Professor” with a mid-tempo BPM that sounds like it’s from a ’70s sitcom or cartoon soundtrack.

The most anticipated tracks include “Negus” featuring MF DOOM and Ike Eyez with an awkwardly humorous soundbite from Spike Lee’s 2000 film Bamboozled serving as the chorus. “The 3 Lyrical Ps” with Styles P and late Mobb Deep legend Prodigy brings NYC rap’s favorite goons together over Harry Fraud’s understated-but-menacing chords. And the posse cut “Clans & Cliks” is a great reprisal of the similarly titled song from Heltah Skeltah’s Nocturnal with Rock, Smif N Wessun, Raekwon, Inspectah Deck, and Method Man exuding the energy of their younger selves over a booming bassline.

There is some overarching how-much-wood-would-a-woodchuck-chuck-like verbiage on the album (“Shit to share, shoot the fair, shot a gun/ Shoot the shit ’til your shit shot, shoulda shot a fair one”). And the banal “Church Bells” with Junior Reid slows the momentum of the album’s pace at the midpoint

The rap game isn’t the same without Sean, but this is an impressive showcase for his fans. Thou art in Heaven can never shut the Ruck up.